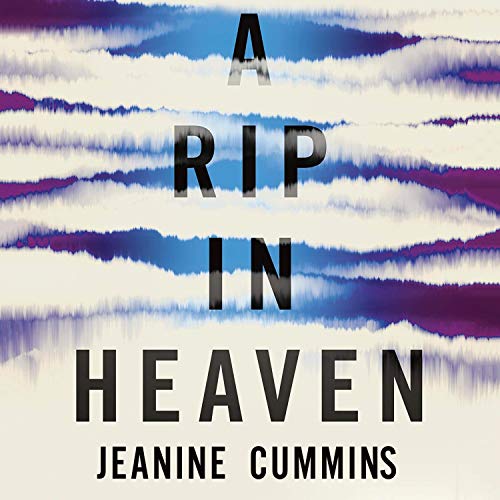 A Rip in Heaven

The acclaimed author of American Dirt reveals the devastating effects of a shocking tragedy in this landmark true crime book.

A Rip in Heaven is Jeanine Cummins’s story of a night in April 1991, when her two cousins Julie and Robin Kerry, and her brother, Tom, were assaulted on the Old Chain of Rocks Bridge, which spans the Mississippi River just outside of St. Louis.

When, after a harrowing ordeal, Tom managed to escape the attackers and flag down help, he thought the nightmare would soon be over. He couldn’t have been more wrong. Along with their entire family, he and his sister, Jeanine, were just at the beginning of a horrific odyssey through the aftermath of a violent crime, a world of shocking betrayal, endless heartbreak, and utter disillusionment. It was a trial by fire from which no family member would emerge unscathed.

What listeners say about A Rip in Heaven

I could not turn this book off. It will sit with me for a longtime. The abuse of authority is beyond words. Such corruption in the St Louis police department yet not held accountable. Mind blowing. A must read. Be prepared for a frightening and descriptive crime.

I am not sure that rating this book with ‘likes’ was appropriate in this case and yet I do feel that the book deserves all the stars.
The book is very well written especially considering the author’s emotions she must have experienced throughout the writing and reading the story.
I have recently read/listened another two books (fiction) written by Jeanine Cummins and I am very impressed by her writing. The characters and the stories are very well described and I would warmly recommend her books.

A very sad story beautifully written. I would have liked an explanation about toms hip but other than that I loved it. Did a double marathon with this book and American Dirt; Cummins is a very talented writer, I look forward to her next book.

excellent book. incredible story. I found it difficult to listen to, realizing it is a true story. Infuriating at times, so much so that I'd shout 'No!' as I listened. thank you for sharing this deeply personal story with us Jeanine Cummins!

One of the most absorbing true stories in Audible; one of the very finest authors in Audible; one of the most talented readers/narrators in Audible!! I was so focused (like a bullet in flight) that I had to stop this book in chapter 12 just to write this beginning of my review because I could not wait to tell you even this much since I’m flabbergasted with the many twists and turns in this extraordinary nonfiction. I have begun to slow down my pace as I don’t want this terrific writing to end: however, there are sad, harrowing events in this sorry tale so that aspect is not anything I would wish to have been prolonged for the victims. // More later when I have finished this, promise! (but I am reluctant to tell “spoilers” and this is why I’m skirting around plot information ... just buy “A Rip in Heaven” and get the information directly from this marvellous author and reader (since they are both the same person).
UPDATE and Conclusion (days later)—SPOILER ALERT: It was no lofty pipe dream that the superb author (Jeanine Cummins) hoped to bring forth the brilliance with which her slain cousins lived their shining lives because in fact, she succeeded in illuminating them here (in my humble opinion). In many True Crime books, much is written about the criminals yet comparatively little about the good and fine people caught up in tragedy: however, many wonderful human beings are highlighted in this particular narrative. I realize my review is rather over-the-top with praise but I must insist to you that I know none of the story’s participants and neither have I ever been paid for any book reviews. Ever. Certainly, this book is far too quality to need this as already in 2 full pages of reviews the ratings are 5 stars all the way! Needless to say, I recommend this book highly.

I purchased this book based on its reviews rather than its content. I am so glad I did. Thank you, Jeanine Cummins, the author. I believe your cousins would be and your brother is proud. I am one of the “curious humans” you write about. However, your story has forever changed my views on the death penalty. Your story has also pushed a “reset”: do I allow my mindless curiosity to read more about the crime and the perpetrator or shift that energy by helping to make a difference in the victim’s healing? I am forever changed. Victims of violent crimes deserve more!

Thank you for sharing this heart wrenching story

As the Mother of a murdered child I felt compelled to read this important story. I will always realize that I'm not alone. WELL done !

I couldn’t put down ...riveting

Very pleased with this book.
Story was riveting and factual as well.
Informative of our criminal justice system

It seems like it took a while for anything to happen. but overall the book was very good once things started to happen.

I got as far as the few chapters after the crime but I couldn't finish this book. It's far to drawn out and even boring at times. Hard to listen and pay attention to. Terrible crime, but I went on google and found out all I needed to know in ten minutes by reading a few articles. I have no idea what else could be told in the over seven hours left of this book. I wish I could return it.

Julia and Robin I know you now

I have read hundreds of true crime stories this by far is yes the saddest, but the most beautifully written and read story I have ever completed. This was painful yet poignant to listen to. You have Truly shown me who your beautiful cousins were, and what a loss to this world has been caused by their deaths. I’m sure they would have gone on to do so much for so many. And I’m sure they were even more than you even describe.. these two beautiful souls lost to this world for a few thugs out for a good time. I cannot imagine the pain your brother as well as their parents and yourself and the rest of your family has had endured.. your book is one of the best True Crime stories I have ever Read. May Julia and Robin Rest In Peace and May each one of your family members find peace as well. If this is your genre or not read this book it is absolutely a story that not only must be read, But one of the best books I’ve ever read or listened too. I felt every moment of this story. Get your tissues out you’ll need them, because you will not only feel the pain but the rage of what these kids endured at the hands of these horrible soulless creatures! A great memorial to your Cousins.

Narrator should stick to writing

Narrator's wooden delivery seems not to have bothered other reviewers (many even gave it 5 stars), however for me her inflectionless delivery overshadows the other positive aspects of this powerful retelling of a tragedy. I'm giving her two stars because she hasn't mispronounced any words so far (I'm only halfway through) and "A Rip in Heaven" deserves so much better.

Well written, and appropriately read by the author as it is her family's story. I listened on a road trip and was engrossed the entire way through.

I have a hard time listening to audio books because I often find myself zoning out or annoyed by the person narrating the book. This book was captivating! To hear the story told by one of the people directly involved in this tragedy really drew me in! You could hear the love, anguish and tears in her voice as she recounted this nightmare her family went through. Prayers for this family to continued healing!