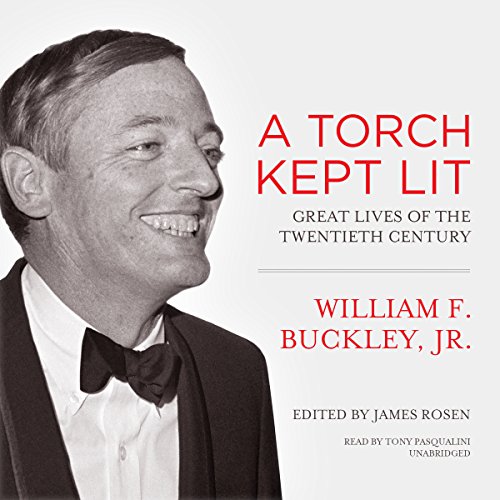 In a half century on the national stage, William F. Buckley Jr. achieved unique stature as a polemicist and the undisputed godfather of modern American conservatism. He knew everybody, hosted everybody at his East 73rd Street maisonette, skewered everybody who needed skewering, and in general lived life on a scale, and in a swashbuckling manner, that captivated and inspired countless young conservatives across that half century.

Among all of his distinctions, which include founding the conservative magazine National Review and serving as host on the long-running talk show Firing Line, Buckley was a master of that most elusive of art forms: the eulogy. Buckley drew on his unrivaled gifts in what he liked to call "the controversial arts" to mourn, celebrate, or seek eternal mercy for the men and women who touched his life and the nation; to conjure their personalities, recall memorable moments, herald their greatness; or to remind us why a given individual, even with the grace that death can uniquely confer, should be remembered as evil.

At all points these remembrances reflect Buckley's singular voice, with its elegant touch and mordant humor, and lend to the lives departed final tributes consistent with their own careers, lives, and accomplishments. Of the more than 100 eulogies located in Buckley's vast archive of published works, A Torch Kept Lit collects the very best, those remembering the most consequential lives (Kennedy, Nixon, Reagan), the most famous to today's listeners (Elvis Presley, John Lennon, Jacqueline Kennedy Onassis, Princess Diana), those who loomed largest in the conservative movement (Barry Goldwater, Milton Friedman), the most accomplished in the literary world (William Shawn, Norman Mailer), the most mysterious (Soviet spy Alger Hiss, CIA spymaster Richard Helms), and those most dear to Buckley (his mother and father).

What listeners say about A Torch Kept Lit

I am a fine artist and I highly recommend this book to anyone who loves history as well as a story well written.... A life well told.
The imagery created by the words and phrases chosen feels like a journey shared.....
The narration is comfortable and the narrator more than capable.
William F. Buckley.... I had no idea! An amazing life!

Great insight into a conservative Giant!

For conservatives that enjoy learning about an Icon of conservatism, this book gives insight from a revealing direction - obituaries & remembrances. I found it fascinating. The language used between friends and foes is so interesting because the words are sometimes archaic & unknown in their meaning. It's a group that very comfortably used language in a formal way - much as was done in earlier centuries. Great stuff!!

I loved the way it was written and the way each obituary was introduced with an overview or history of the background between Buckley and the deceased.

I hope many will read WFB’s candid profiles of the great and the profane. Buckley is a wonderful, funny and entertaining storyteller.

May he have found his just rewards.

I most highly recommend it. Lots of historical bits of past influencers of our modern nation.

I Surely Miss That Man

I wish I owned every copy of "The National Review" and a video of every "Firing Line." No one articulated conservatism better than William F. Buckley, and he did it with such aplomb and class. There exists no one today of any political persuasion who is anywhere near his equal. This audible book, with its excellent reading, is a fine reminder of what perfection is, and it will be listened to by me over and over.

Any fan of good writing will enjoy this regardless of their political leanings. Buckley was a master without a contemporary equal except for perhaps the editor of this volume who has rekindled that which needs to be kept lit.

It's WFB at his best

This was magnificent sketch of the century.
I would have been better in his voice, but we can't have everything.

The narrator did an excellent job. The editor James Rosen, serial sexual harasser from Fox News, cannot let Buckley’s words speak for themselves, he must get his own barbs in, that like Buckley’s have aged badly. Buckley is a gifted writer and can be most kind to people that fit within his narrow view of respectability. So long as you are rich, famous or totally agree with him you could be his friend. The obituaries show him to be shallow, vindictive, and mean spirited, absolutely lacking in empathy for the less fortunate, which he avoided meeting by sailing on his yacht and skiing in gstaad. His unchristian mean spiritedness continued after his death when he disinherited one of his grandsons for the crime of being born out of wedlock, proving bastards are not always born out of wedlock but can be born into rich Catholic families in Stamford ct.

You will excuse me for withholding the fifth star over the trifle of one mispronunciation. Otherwise, totally enjoyable and very well done.

This book was horrible!

What was most disappointing about William F. Buckley’s story?

If you could play editor, what scene or scenes would you have cut from A Torch Kept Lit?

Everything and started from scratch

This book put me to sleep...very easily.