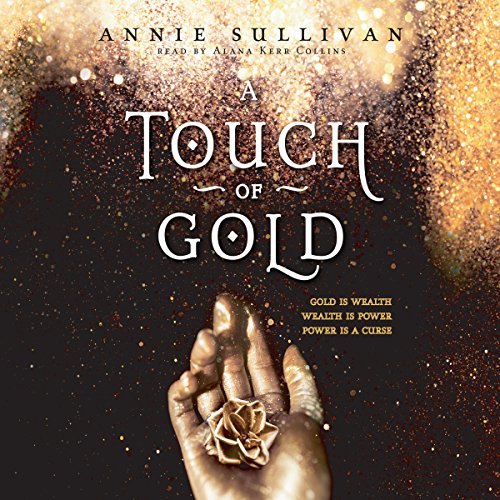 A Touch of Gold

Gold is wealth. Wealth is power. Power is a curse.

King Midas once had the ability to turn all he touched into gold. But after his gift - or curse - almost killed his daughter, Midas relinquished "The Touch" forever.

Ten years later, Princess Kora still bears the consequences of her father’s wish: Her skin shines golden, rumors follow her everywhere she goes, and she harbors secret powers that are getting harder to hide. Kora spends her days locked in the palace, concealed behind gloves and veils, trying to ignore the stares and gossip of courtiers. It isn’t until a charming young duke arrives that Kora realizes there may be someone out there who doesn’t fear her or her curse.

But their courtship is disrupted when a thief steals precious items from the kingdom, leaving the treasury depleted and King Midas vulnerable. Thanks to her unique ability to sense gold, Kora is the only one who can track the thief down. As she sails off on her quest, Kora learns that not everything is what it seems - not thieves, not pirates, and not even curses. She quickly discovers that gold - and the power it brings - is more dangerous than she’d ever believed.

Midas learned his lesson at a price. What will Kora’s journey cost?

From author Annie Sullivan comes A Touch of Gold, the untold story of the daughter King Midas turned to gold, perfect for fans of Cinder and The Wrath and the Dawn.

What listeners say about A Touch of Gold

Pros:
-unique take on King Midas, and there aren't many retellings out there, so I liked that.
-apart from the evil guy collecting skulls that may scare children, this would be a safe, clean story for a family to listen to on a car trip.
-there's a bit of everything, action, mystery, romance, character growth, etc.

Cons:
-I just didn't care. It didn't engage me.

Harsh, but for me the story was too slow. I am harder to please though, so it may work for you.

I loved this story so much and the narrator did an excellent job! I need more of this story!!

This is definitely an excellent read and well worth it. Not too long and not to short, and the story kept me excited and captivated for what was coming next. Great twists, great character, and definitely looking forward to more from this author!