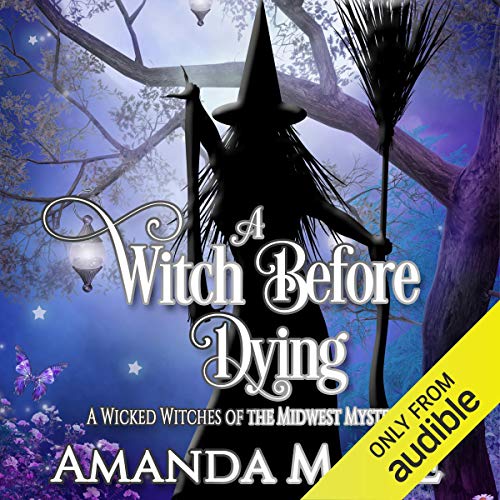 A Witch Before Dying

Hemlock Cove is bustling with activity.

FBI Agent Landon Michaels has officially moved in with his girlfriend, Bay Winchester; Mrs. Little is planning an impromptu festival; and there’s a new witch in town. The question is: Is Scarlet Darksbane a real witch?

Bay is in the middle of all of it. She has her hands full thanks to her imminent purchase of The Whistler...and the fact that Landon and Thistle seem to be butting heads while sharing the same roof. Thistle isn’t long for the guesthouse, but the weeks of overlap before she moves promise to try Bay’s patience. Things only get worse when one of the renaissance festival performers is found dead in the town square, and Bay and her wacky cohorts find themselves in the middle of another messy mystery. The murder has ritual overtones, and Bay is worried that everyone will start pointing fingers at the real witches if a suitable suspect isn’t found.

That’s only one of her problems, though. It seems the new witch - who seems to be focused on entrenching herself in Hemlock Cove as fast as possible - might also be a suspect. She’s definitely on Aunt Tillie’s radar, and the elderly Winchester is determined to uncover all of Scarlet’s secrets.

It’s up to Bay, Landon, Aunt Tillie, and the rest of the motley crew to figure out the truth and head off a killer before another victim falls prey to a demented fiend with murder on his or her mind. The big question is: Will Bay survive to uncover the truth, or will she be the next victim?

What listeners say about A Witch Before Dying

I’ve been a fan of this series for a while but really don’t like this narrator. The characters are now whiny or sound like men. It’s hard to enjoy the story when the narration isn’t great.

Not the best storyline.

While I usually enjoy these books, this story just fell flat for me. I just didn't like the whole family renaissance actors storyline. It just felt like the story was thrown out there with little thought. Maybe writing so many different books at the same time is finally making a difference in story quality. While I understand that the whole living situation needs to change for Bay, I can't imagine an actual FBI agent acting so childish. Really disappointed this time.

I find most series can get a little old at time especially the characters. But Aunt Tillie stays as funny and sharp as ever.

Not the strongest book in the series, but enjoyable. Really felt more like a book to move the series forward in time. The mystery was Ok but not at the same level as prior books I was good with the new narrator. I did wait before trying to listen. It's hard to adjust to new voices this far into the series. I thought she did a great job. I liked the portrayal of Bay, Landon, Chief Terry and Aunt Tillie. The voice of Thistle reminded me of Rudolph wearing the fake nose. Other than that, I thought her timing was good and I didn't have a hard time telling the characters apart I hope to see Silver Fox visit Hemlock Cove in the future.

A witch before dying

Amanda M Lee is the best ! Love all of her books they just can't come fast enough on Audible!

Absolutely loved the book but I am not so wild about the narrator. Looking forward to more from the author.

Gotta Love them all

If you could sum up A Witch Before Dying in three words, what would they be?

Have you listened to any of Hollis McCarthy’s other performances before? How does this one compare?

I really like the original narrator better, it was hard to switch...but OK now

Aunt Tillie is my hero

I enjoyed every bit. This book is as good as the rest in the series. Good plot and funny as always. Bay and Thistle are becoming like Aunt Tillie, they are growing up and getting stronger in every way. Even Landon is growing up. I can’t wait for the next book.

Can't get past narration

I am a fan of this series, and was excited to see there was a new book to delve into. Almost as soon as the first line was uttered, I thought I was going to have to call it quits. I just simply cannot get past the narration. The main characters voice sounds like a cartoon character and it is not remotely similar to the other books in the series. the voices did not fit the characters at all.