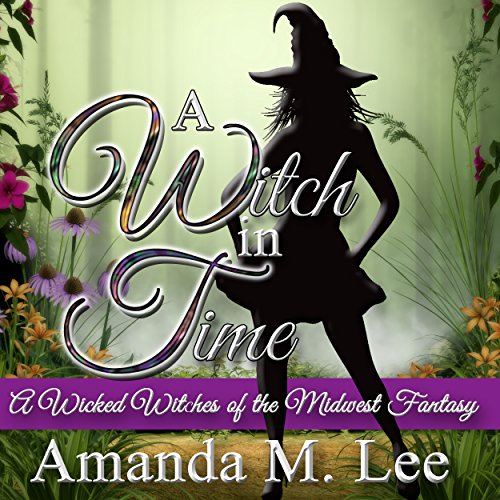 A Witch in Time

A storm is raging in Hemlock Cove, but it's nothing compared to the one raging in Aunt Tillie's head. An accident renders Aunt Tillie unconscious in the hospital, and when Bay and Landon fall asleep while sitting vigil, they're transported to a scary world: Aunt Tillie's mind. The couple will be shuttled through time - almost 80 years of it - and witness all of the ups and downs of Aunt Tillie's past. Have you ever wanted to see Aunt Tillie as a child? You're in luck.

Landon and Bay will get to see more than they ever dreamed of, including weddings, births, and even tragic deaths. The trip isn't all fun and games, because Aunt Tillie is fighting waking up. She's happier reliving the past than fighting for survival in the present. Bay and Landon have their hands full. They have to live through good times and bad - including hanging out with their own demons - and force Aunt Tillie to choose returning with them rather than staying with the people who own her heart. Fasten your seatbelts, because it's going to be a bumpy ride...for everyone.

What listeners say about A Witch in Time

I'm sick of the bacon talk

I generally enjoy this series however I am finding the constant reference to smelling like bacon loving bacon all is bacon is getting to be annoying. I found for the most part this was a very enlightening story as to a lot of the background. and then at the very end we have this whole bacon scenario and an interaction I found myself uncomfortable with.

there is No emotion in this narrators voice. makes me cringe. the original narrator aris did the best. the last one was better although the last one made them all sound stupid.

I really enjoy A Wicked Witches of the Midwest series. They are cosy, funny and entertaining.
But I don't like the new narrator, I wish that they would keept Aris, her delivery is funnier and I like how she act out all the characters.

A must for any fun loving witch.

If you could sum up A Witch in Time in three words, what would they be?

What was one of the most memorable moments of A Witch in Time?

The best part for me was the memories where Bay got to see and speak with her grandma and uncle. And young Bay wanting to keep Landon lmso it is a very fun and full of everything the Winchester girls are.

What does Lesley Ann Fogle bring to the story that you wouldn’t experience if you just read the book?

Lesley reading the book is more fun than just reading it when she does her best to give each character their own voice. You feel like its being acted out in the room rather than you just reading it and you tend to get in the book in your own mind.

When Aunt Tilly showed through the different memories just how big her heart really is. Her family from the past to the members in the future mean the world to this tough ole woman and its very sweet. Just don't tell her you heard that lol she likes the world to think she is persnickety lol

You need to read or listen to the Winchester Witches series and don't forget the shorts. As a whole story they are amazing. Each book is a piece of the jigsaw puzzle that is the life of the Winchester Witches. They are sisters, cousins, aunts, daughters, mothers, witches and women. They are fun and witty and snarky. Amanda's writing is very real but still entertaining and just a whole lot of fun. You never know what is going to come next you need to get the whole collection it is very worth it.

ms Fogle is an incredibly talented voice actor, and she really brings this story to life. it's what dreams are made of...
🌈💗🌈

witches of the Midwest

Love these books, listen all the time. Going for the next one in the series

so nice to stop and put names to all tha I will.

It was quite nice to have the family units named and explained.
thanks for the time and effort.

I love the witches of the Midwest series, I really think this is the one yet.

For the story yes but not the narration

Aunt Tillies relationship with the family