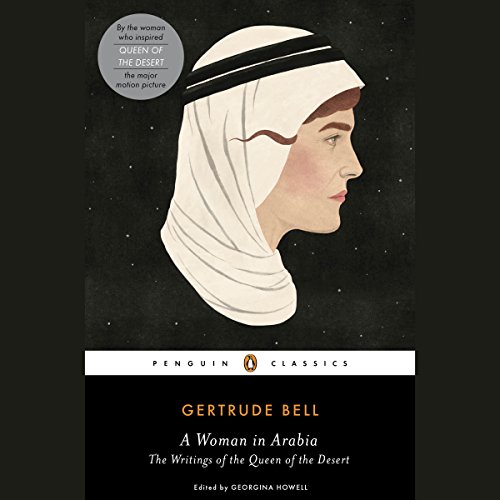 A Woman in Arabia

A portrait in her own words of the female Lawrence of Arabia, the subject of the PBS documentary Letters from Baghdad, voiced by Tilda Swinton, and the upcoming major motion picture Queen of the Desert, starring Nicole Kidman, James Franco, Damian Lewis, and Robert Pattinson and directed by Werner Herzog.

Gertrude Bell was leaning in 100 years before Sheryl Sandberg. One of the great woman adventurers of the 20th century, she turned her back on Victorian society to study at Oxford and travel the world, and became the chief architect of British policy in the Middle East after World War I. Mountaineer, archaeologist, Arabist, writer, poet, linguist, and spy, she dedicated her life to championing the Arab cause and was instrumental in drawing the borders that define today's Middle East.

As she wrote in one of her letters, "It's a bore being a woman when you are in Arabia." Forthright and spirited, opinionated and playful, and deeply instructive about the Arab world, this volume brings together Bell's letters, military dispatches, diary entries, and travel writings to offer an intimate look at a woman who shaped nations.

For more than 70 years, Penguin has been the leading publisher of classic literature in the English-speaking world. With more than 1,800 titles, Penguin Classics represents a global bookshelf of the best works throughout history and across genres and disciplines. Listeners trust the series to provide authoritative texts enhanced by introductions and notes by distinguished scholars and contemporary authors as well as up-to-date translations by award-winning translators.

"A fascinating read.... The story that emerges is thought-provoking.... Gertrude’s legacy makes easy parallels to the present, from world powers trying to determine the political shape of the Middle East to women’s struggles to be taken seriously by male colleagues. In A Woman in Arabia, she faces it all with humor, passion, and candor; even a century on, she’s a woman worth knowing." (NPR.org)

"[A] well-chosen selection from [the] letters and memoirs [of] one of the most remarkable figures of the late 19th and early 20th century.... Bell might be regarded as the much happier, female equivalent of T. E. Lawrence, who knew and admired her." (The Washington Post)

"I hope this collection of Bell’s prose, more than the upcoming film by Werner Herzog, stirs up controversy about her time as an archaeologist and spy and spearhead of post-WWI British policy in the Middle East, the effects of which can still be felt today." (Jonathan Sturgeon, Flavorwire's "10 Must-Read Books for August")

What listeners say about A Woman in Arabia

Raw historiography of a spectacular heroine

Driven very much by the narrative told straight out of her own letters, Miss Bell is allowed to tell her own story much like she might have done in the autobiography she never wrote. I found this is a very interesting approach, and it's certainly very well performed with one narrator-voice and another speaking the words of Gertrude herself.

This is a wonderful collection of Gertrude Bell’s letters. She was a remarkable woman by any standard. The narration was done impeccably well. Bell’s descriptions of the desert and the East in general were captivating. Enjoyed every minute.

What a wonderful role model this woman was for anyone who has a passion that doesn't quite fit the mold. She was so accomplished and I didn't know anything about her.

A Rivoting Piece of Work

I thoroughly enjoyed this account of Gertrude Bells life story. Highley recommended for anyone interested in the Middle East

Vivid snapshot, through her own writings, of the architect of the modern Middle East. Gertrude Bell comet-vectored through her unparalleled life, formidably brilliant, steely brave, passionate for expanding the breadth of human accomplishment.

Queen of the desert