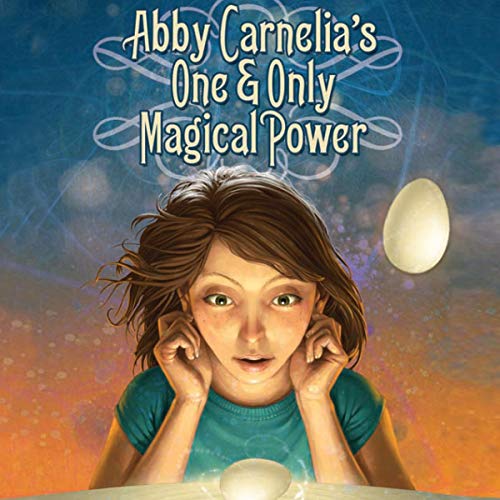 Abby Carnelia's One and Only Magical Power

Abby Carnelia is an average sixth grader. She gets along okay with her parents, does pretty well in school, and has an annoying little brother. There’s absolutely nothing remarkable about her at all — that is, until the day when she happens to tug on her earlobes while standing in front of a hard-boiled egg.

That’s the day Abby discovers there’s something very, very special about her after all: she has a magical power, and there are some people who will do anything to find out where it came from.

What listeners say about Abby Carnelia's One and Only Magical Power

This was a very great Battle Book. I love it alot.

If you love magic you will definitely love this book. It's one of the best books I've ever read. I recommend it.

Fantastic Story for Anyone

I got the book for a child, then decided to listen to it myself. Never have I finished an Audible book so quickly. I just had to find out what happened next. I'm a big fan of David Pogue and knew he had dabbled in magic tricks. This book should be a movie. Pogue's expertise as gadget critic, a NOVA host and as a New York Times columnist makes him the perfect person to write an upbeat tale.

I was disappointed, I hope you won't be

Yes... I'm a big fan of David Pogue's columns and video on NYTimes, CNet, Yahoo and his Nova mini-series. I read about the story about how this book was written and the themes and ideas that David Pogue wanted to bring in this book and it sounded like it would be great story... unfortunately, I don't think the end result just came together well... too often Pogue ended up using his "journalistic/description/science writer" voice to describe things objectively... instead of emotionally as a fictional storyteller.

Has Abby Carnelia's One and Only Magical Power turned you off from other books in this genre?

No. I like the genre of children discovering and entering a new world of wonder and secret amazement. The problem were that this book spent

I find the corny deliver he has in his videos and on TV show amusing in 2-3 min segments... but his hammy deliver gets a little tiring for me after the first hour. Particularly his imitation of two of the more cartoonish characters were uninspired to me (again good for a father just telling his child a story... not as good on a professional audiobook).

If you could play editor, what scene or scenes would you have cut from Abby Carnelia's One and Only Magical Power?

You know towards through the book I was thinking this very thing. I would cut out most of the excessive description passage where the author list in excessive and breathlessly excited detail every building, room, piece of furniture, electronic gadget... much in the same way a salesperson would describe the features of a product in a commercial.I would have cut out all the blatant foreshadowing and the ending chapter as well.

Perhaps I am just the wrong audience for this book. I'm a decent fan of David Pogue and had was hoping this would be a nice clever little story I could share with my daughter... but sadly the differences between a columnist and a novelist is demonstrated only too obviously for me here (just because you are good at one style of writing, doesn't me you will be of the other).

Clever, and with a good underlying message

Got this book for my 3 daughters for a road trip, and gave it a listen myself. It had a clever story line, some thought-provoking little gems, and is very current in its themes. My daughters (ages 7 and 9) enjoyed it thoroughly. The narrator does an excellent job with various character voices, which adds interest and appeal. It has lots of good messages about finding what's special inside of us, and about friendship.