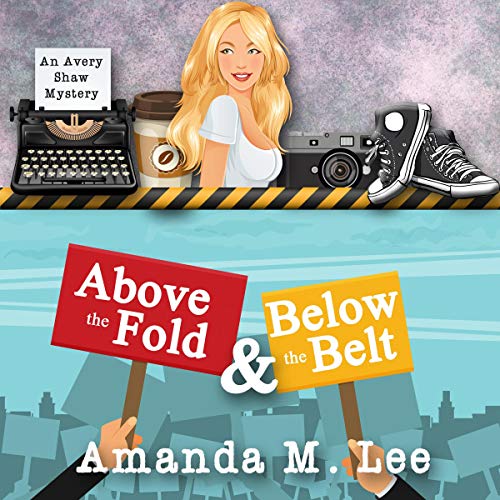 Above the Fold & Below the Belt

Avery Shaw has taken on her fair share of jerks. Often, she’s considered the jerk when she takes them down...a role she gladly relishes. Now, though, she’s taking on a whole faction of jerks.

It seems a battle of the sexes is brewing in Macomb County. A local shock jock, a man who believes women should be home tending children and keeping the house clean while men bring home the bacon, is on trial for sexually harassing his underlings.

His followers believe he’s innocent. Every female-empowerment group in the state - and ultimately the nation - believes he’s guilty. That means it’s a media circus, and there’s nothing Avery likes more than a circus.

She has her hands full with this one, though. She very clearly agrees with one side, but there seems to be something wrong with the underlying story. When one of the radio personality’s followers is shot in the middle of a rally, ensuring he’s a martyr for the cause, Avery realizes there’s a path to follow...and it’s long and winding.

Avery knows who she wants to win. She also knows someone isn’t telling the truth. It’s her job to find out which side is lying.

It’s all hands on deck for another zany adventure, and everyone is along for the ride. Who’s left standing at the end is anyone’s guess, but Avery smells blood in the water...and she’s going to find the truth no matter who goes down in the process.

What listeners say about Above the Fold & Below the Belt

Things maybe new for Avery now stil a lot of madcap when she is around. The story she is to be doing is getting her into a lot of trouble with a lot of people. Her boyfriend just shakes his head. Good story and narration. Given audio for my voluntary review

Another great Avery Shaw book. I love the growth of Avery and Elliott’s relationship. I certainly hope Fawn gets her comeuppance sometime soon.

This was a great installment in the series. There’s a huge plot twist, and the characters seem as though they grow a lot. I enjoyed the narration, and feel it added a lot to the story. Can’t wait for the next one!

can't wait for the next book!!!

the Only issue i have with this one is that the narrator changed up Duncan. up until now, he's always had a bit of a lisp, and although im definitely not making fun of Anyone who may have such a problem, it totally fit the character. especially when he was angry. im just a little disappointed in the change bc even tho he's the 'office tool' it was part of who he is, and i don't like it being taken away. no sir, i don't like it. 😒😁

Still loving Avery after all these books

I don't know how Amanda M Lee does it. She's knocking out multiple series, all with their unique characters, a little bit of her own personality in a few of them, i suspect, and they are never lacking for substance. To have that many stories growing in your head just be an amazing thing. Avery is my favorite though, and although it wasn't my favorite in the series, it was still a great read. I did wish for a little more interaction with her usual newspaper crew, but i have no doubt they'll be making more appearances as life unfolds for the whole cast. Thank you Ms. Lee, for another entertaining day.

Another great listen in the series. Angel Clark captures Avery’s shrillness and her child-like love of shoes, video games, and being queen of snark.