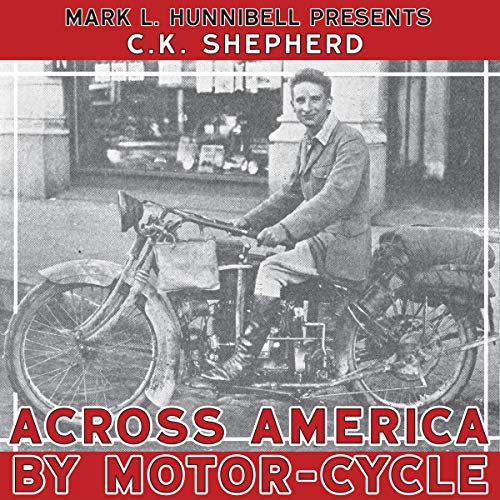 Across America by Motor-Cycle

A veteran of World War I, British RAF Captain C.K. Shepherd arrived in New York in June 1919, bought a top-of-the-line Henderson four-cylinder motorcycle, and headed west on a solo cross-country adventure to see America. He set off on his adventures, arriving in San Francisco two months later. Having completed his voyage, he sold his beloved motorcycle, dubbed “Lizzie”, on the street in San Francisco and then made his way back to his home in Birmingham, England.

Three years later, he wrote Across America by Motor-Cycle - a memoir and travelogue that has become a motorcycle history classic. The 1922 book is now in the public domain and has been reprinted and made electronically available by others besides me. However, this is the first known production of the book in audio format. The entire recording has been painstakingly made by reference to a digital copy of the book newly scanned from an original print of the hardcover book as published in 1922.

All words in the original book are spoken in a voice selected to most closely represent that of C.K. Shepherd as well as all of the "characters" about whom C.K. wrote. This audiobook will provide listeners with a new way to appreciate this wonderful adventure. Enjoy!

What listeners say about Across America by Motor-Cycle

A Great Account of Early American Travel by a Brit

When this Brit crossed the US by motorbike in the early 1900's, it was obvious that there were things he absolutely had trouble with. Primarily America itself. More often than not, Mr. Shepherd was quite critical of Americans at the time as well as with the American culture that apparently wasn't as refined as his homeland.

Beyond the occasional dislike of where he was, the account of his journey was quite entertaining. His journey, can be compared in some ways to George Wyman's, who cross the US by motorbike some years before him. Mr. Wyman's account of his travels was far less critical of the people and places than his British counterpart was naturally, but both expressed quite the distaste of American roads at the time.

Certainly a worthwhile listen and I recommend it. Gives the listener a view into what motorcycle travel was like over 100 years ago.

The narration was quite good and I really enjoyed listening to Mr. De Renzy-Martin. It was written that the narrator's voice may have closely represented Mr. Shepherd's and in doing so, they were able to really draw the listener into the emotion of the Brit quite well.

Good job and a great story.

My only regret is that I won't be able to be a part of the 100 year anniversary of Capt. Shepard's journey across the US. This is a wonderful book, excellently narrated in all ways and well produced as an audio book.

I’m glad I listened to this story. Really cool hearing a 1919 view of crossing the country on a cool bike. The narrator was great as well.

I found the story to be very demeaning to Americans and our way of life. I could only get through a few chapters.

Much more than I expected

This is an absolutely fantastic slice of the American story from a British person‘s perspective. I think anyone would enjoy it whether they like to ride motorcycles or not, but if you like motorcycles you will love this story.

A great adventure with perfect narration.

in 1919 Captain Sheppard set off from New York to San Francisco.
What follows is an epic journey. It paints a picture of the United States a century ago and is immensely interesting.
It also told with classic British understatement and humour drier than a martini with no vermouth.
in addition to that the narrator does the dialects so perfectly that when listening to the conversations you could swear there were two people.
I have listened to over 400 audio books and this one is in the top 5.
I will definitely be listening to it again.
Highly Recommended.