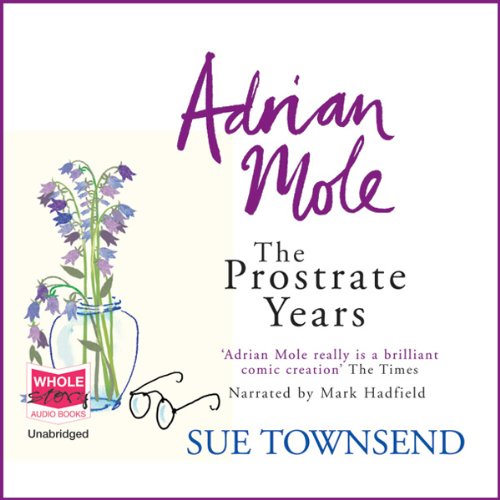 Written by: Sue Townsend
Narrated by: Ark Hadfield
Try for $0.00

Adrian Mole is 39 and a quarter. Due to his financial situation, he has been forced to move next door to his parents. And his numerous nightly visits to the lavatory lead him to suspect prostate trouble.

As his worries multiply, a phone call to his old flame ignites powerful memories and makes him wonder - is she the only one who can save him now?

What listeners say about Adrian Mole: The Prostrate Years

I’m a big fan of anything by Sue Townsend, especially titles in the ‘Adrian Mole diaries series’ This latest instalment doesn’t disappoint. Great job by the narrator. Full marks for comic timing & snappy delivery of dialogue for all the different voices in a really large & diverse cast of characters...

And this book is no exception- i'm just so glad that Sue Townsend continues to write them. But, if beggars CAN be choosers, I thought this book ended too abruptly. I really wanted to know what happened next, and I really am hoping that the author let's us know sooner rather than later.
Narrator was brilliant and totally believable.

getting it in the end

Adrian Mole, twice-married, father of 3, writer, intellectual, bookshop worker, frequent urinator. He lives next door to his parents in a renovated pigsty. Although he doesn’t always agree with their choices, he does love them and helps take care of his father, who has been in a wheelchair since he had his stroke. He lives in Leicestershire, in the middle of England. It’s where he was born and grew up, and after spending several years in London as a younger man, he is back home where he seems to belong.

He is married to Daisy, a beautiful Mexican-English woman with strong opinions, and their daughter Gracie is a free-thinker who keeps getting in trouble at preschool for not wearing her uniform. Adrian works in the town’s bookshop, and is currently writing a play for the locals to put on, a 60-role work of historical fiction, Plague. And he’s having some health concerns, so he tries in vain to make an appointment with his doctor. After he goes to an after-hours clinic and finally makes it to his doctor’s office for a follow-up, he is faced with the bad news: prostate cancer.

As he considers his options, family and friends gather near to help. He gets in more help at the bookshop, his mother offers to take his to his radiation treatments, and Daisy gets a job to help with the expenses. He has to set aside his work on Plague for the time being, but everyone in town is quick to ask him about his prostrate cancer (after a few times, he stops correcting them) and to offer words of kindness.

And all of it is captured in his diary.

The last in the series of the beloved Adrian Mole diaries, Adrian Mole: The Prostrate Years finishes the journey that we started with Adrian back when he was only 13 3/4. Author Sue Townsend brings the tale full circle, with Adrian learning how to love his life, love his parents, and love his future.

I have read all of the Adrian Mole books, most of them several times, and I never tire of spending time with Adrian and his friends and family. For Adrian Mole: The Prostrate Years, I listened to the audio book, and narrator Mark Hadfield brought the story to life for me in the most enjoyable way.

If you’re not familiar with Adrian Mole, I’d suggest you start at the beginning, but you don’t have to. Each of these 8 books is a masterpiece of dry English understatement, of family and all its complications, and of one man’s secret thoughts. Each book is moving, charming, funny, frustrating, and perfectly lovely, and now that I’ve reached the end (again), I’ll just have to go back to the beginning and start all over again.

It's good, but not the best

If you like the series, you will like this. New funny characters. The narrator is allright, but not as good as the original

What made the experience of listening to Adrian Mole: The Prostrate Years the most enjoyable?

SUE TOWNSEND DOES NOT DISAPPOINT. HER STORIES ARE INTELLIGENT AND VERY FUNNY. GREAT BRITISH HUMOR AND IRREVERENCE. ITS GOOD TO LAUGH AT SOMEONE ELSE BEING SELF DEPRECATING.