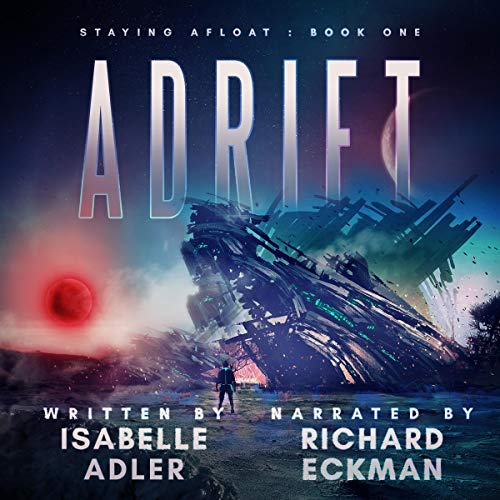 Written by: Isabelle Adler
Narrated by: Richard Eckman
Try for $0.00

Some jobs are just too good to be true.

Captain Matt Spears learns this the hard way after a mysterious employer hires his ship to hunt down an ancient alien artifact but insists on providing his own pilot. Ryce Faine is handsome and smart, but Matt has rarely met anyone more obnoxious. With tensions running high, it isn’t until they are attacked by the hostile Alraki that Matt grudgingly begins to respect Ryce’s superior skills, respect that transforms into a tentative attraction.

Little did he know that their biggest challenge would be reaching their destination, an abandoned alien base located on a distant moon amid a dense asteroid field. But when Matt learns that Ryce isn’t completely who he says he is and the artifact is more than he bargained for, he is faced with a difficult choice. One that might change the balance of forces in the known galaxy.

Matt doesn’t take well to moral dilemmas; he prefers the easy way out. But that might not be possible anymore, when his past comes back to haunt him at the worst possible moment. When faced with a notorious pirate carrying a personal grudge, the fragile connection Matt has formed with Ryce might be the only thing that he can count on to save them both.

What listeners say about Adrift

Sci-fi, adventure, and romance among the stars!

To say that I enjoyed this book would be an understatement of gargantuan proportions. I have to admit that I have a soft spot in my heart for warm-hearted Rogues. Matt definitely hit me right in the feels. the story itself was somewhat traditional space adventure fare, but made unique and exciting by family, past, and present entanglements. Overall, I highly recommend this audiobook.

Great sci-fi story. Had a little issue with the love interest as I never had a book go that route before.
But didn't stop me on getting Book 2. Just loved the series. Isabelle put in a great time with putting love and emotion into her space story.

Admittedly, I came into this expecting a relatively straightforward sci-fi Han Solo-esque story and romantic subplot with little to no frills—which would have been totally fine. Cannot overstate how pleasantly surprised I was. For the introduction to a presumed series(?), the story is tight and well-written and the narration by Richard Eckman is notably spectacular, especially for this genre. Highly recommend and looking forward to (pulling for!) The next book!

only ok, but not bad

This wasn't necessarily bad, but the author took the most often traveled road at every opportunity. I thought there was a lot of potential for an interesting story here. But Adler instead told one that every aspect of has already been told in the same ways too many times.

Further, aspects of it weren't well developed. There was a lot of hinting about a family rift that was never directly addressed, for example, and then it was easily rectified when the plot called for it. Again, without the reader ever really seeing what made that happen beyond, "Well, maybe I made a mistake." Basically we were told that the main character didn't speak to his family and then told he had decided not speaking to his family was a mistake and now he'd speak to his sister. It was never delved into and, as a reader, it felt tacked on and hollow.

I felt the same way about the romance. Let me preface this by saying the vast majority of what I read has a romantic plot or sub-plot in it. I love my romance books. But here I really, really wish Adler had either left it out entirely or stretched it over two books. It felt very much like the two men went from distrustful allies to friends and no further. So, when there were suddenly kisses and love it didn't feel developed and felt 100% forced and out of place. Had Adler allowed them room to become friends here and moved to lovers later, it might have worked. But she tried to get too much in too fast and it failed, in my opinion. I actually think it would have worked just as well if the two became platonic best friends. Certainly, Ryce's description would have moved to Ace/Gray-Ace a lot easier than it did to lover and been a more interesting story for it.

Lastly, I didn't love the narrator of the audio version. I listened to the whole thing at 90% speed and still thought it too fast sometimes. Plus, in the beginning, it just didn't feel very natural. That improved as it went along though. I'd give the narrator a 3 out of 5 too.

Note: I received an audible code for a free copy of the book. I chose to listen and review it.

I really liked this book. It's definitely one of the better space sci-fi books I've read recently. I liked the general plot and thought that the characters were well-written. I was a little unsure about the romance aspect of the story in a few places, but it fits into the overall story well.
The narration was also solid as the book was performed well, though there were a few places I thought the tone could have been better. I would have given a 4.5 to the narrator, but I didn't want to go with a 4.

I requested and received a free copy of this book in exchange for an honest review.

This review is for both Ashore and Adrift.
This series has such a great start.
Ashore keep my interest into looking forward to the next in the series Adrift. The narrator was excellent. In fact his performance helped to make this series a "can't wait for the next".
My only drawback in making this a 5 star is to much focus on the romance.
This audio was given to me free and I voluntarily gave this review.

When captain Matt Spears accepts a dubious job retrieving an unknown object in a remote location, he knows he is getting in murky waters, but the money he is being offered is enough to grant his crew some deserved holidays and to undergo the repairs his ship Lady Lisa badly needs. Having to yield the pilot position to a stranger rubs him the wrong way, though, and one look to handsome but aloof Ryce Faine confirms his suspicions: the man is trouble. But his problems have just started…
Yay! I’ve really liked this story. A really entertaining mixture of sci-fi and adventure, it has everything to keep you hooked: ancient alien civilizations, a rebel hero, smugglers, a mysterious stranger looking for a dangerous artifact, a budding romance, even a one-eyed pirate…. It’s been an engaging trip I’ve fully enjoyed. My only complaint is that there are some questions unanswered…
Richard Eckman does a great job bringing all these characters to life. He masterfully paces his narration to keep the tension of the story changing pitch and rhythm when necessary to engage the listener. For me, his rendering of the story is a remarkable performance.
This book was given to me for free at my request and I provided this voluntary review.

Isabella Adler did some nice work, engaging characters and the world build was perfect (no overload of information). Did like that you stick to Matt's point of view, really liked Matt. Richard Eckman did a wonderful narration, perfect voices for Matt and Ryce. There was no issue identifying who was speaking and help get the emotions needed for the scenes. The book end in a HFN and book 2 is ready to continue the adventure.
This book was given to me for free at my request and I provided this voluntary review.

I enjoyed this space adventure. There are lots of aliases, secrets, and hidden agendas. The characters include smugglers, space pirates, rogue military agents, and an ancient (presumably deceased) alien society. Hidden bases and secret technology figure prominently. There are the beginnings of a possible M/M romance, but nothing more than a couple kisses happens in this book. I enjoyed the story and the action, although I have a lot of lingering questions. Since this is Book I, I am hoping there is more to come from the story and these characters.

The narration was pretty good. There was a little background noise from time to time, but it didn't distract from the story.

I received a complimentary copy of this audiobook at my request and am voluntarily leaving this honest review.

The following review is written voluntarily by me, without any favor toward the author (whom I have never met nor read the work of) although I did receive a complimentary copy of "Adrift" upon request.

OVERALL — 4 stars
I liked seeing the change in the relationship between Matt and Ryce Faine as the story progressed and was pleased overall with the whole story. I began adding my first bookmarks in chapter 15 since it had seemed like a long wait for something physical to happen between Matt and Ryce. Those turned out to be the only bookmarks because they never took it beyond that.

PERFORMANCE — 3½ stars (I listened at speed 1.25)
Richard Eckman, the narrator, has a pleasant voice to listen to, but I wish there had more of a range in regard to differentiating the main characters. The different voices seemed reserved for minor characters (not Matt and Ryce). Also it would have been nice if Val, the Russian crew member, had a more consistent Russian accent. although it is interesting that it only comes out when he is upset or emotional, like trying to keep it undercover although he is trying to rediscover so-to-speak his Russian roots by reading Russian authors. I do like that the narrator is not monotone and that he gives nuance to what he is reading, in both the dialogue and descriptive portions.

STORY — 3½ stars
Isabelle Adler did a terrific job making everything come together. It was like you could see it all happening in your mind. The aspect of attraction between the two men (whom other authors might – for purpose of drama – have had in continual conflict) was a different take on this sci-fi trope. On the other hand, the latter half of the book was less compelling than the first... perhaps because of that lack of conflict between them. I expect things will heat up in the sequel between Matt and Ryce and it will be interesting to see how their adventures together maintain conflict, and I'm excited to find out.

If my review here has been helpful to you, please click "Helpful" below.