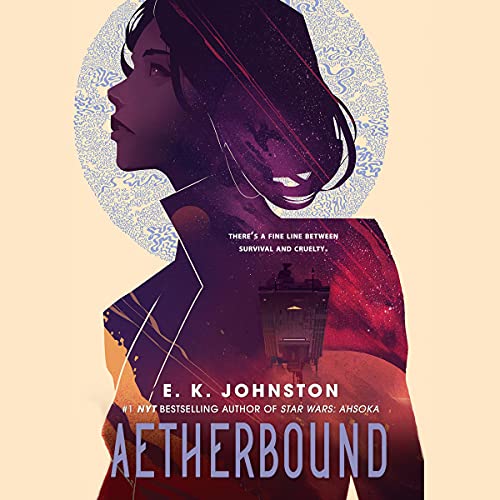 Set on a family-run interstellar freighter called the Harland and a mysterious remote space station, E. K. Johnston's latest is a story of survival and self-determination.

Pendt Harland's family sees her as a waste of food on their long-haul space cruiser when her genes reveal an undesirable mutation. But if she plays her cards right, she might have a chance to do much more than survive. During a space-station layover, Pendt escapes and forms a lucky bond with the Brannick twins, the teenage heirs of the powerful family that owns the station. Against all odds, the trio hatches a long-shot scheme to take over the station and thwart the destinies they never wished for.

"Aetherbound had me by the heart in just a few chapters...[a] book for anyone who’s ever underestimated themself, and who had to find their people to figure out their power." (Tor.com)

"Brimming with heart, this book is the tale of young people searching for a better, kidner way." (San Diego Union Tribune)

What listeners say about Aetherbound

Amazing Story with a neat take on Technomajicks

The story was wonderful, and top notch narration! EK Johnston brings these characters to life!

A Lot of Wasted Potential

I'm a big fan of E.K. Johnston and was very excited for this book. It starts out strong and just as it's gaining momentum it comes to a stand still. I felt like the whole middle of the book was just a big stall until something finally happens in the last few pages. Unfortunately this novel was highly predictable and left little to the imagination. There was so much wasted potential here. I really struggled through this one. This was not E.K. at her best. Hoping a sequel will bring more home. Ashley Eckstein's performance was wonderful as always.

I wish there was more.

Interesting premise, thought provoking, and tackles sensitive issues with the forwardness of a battle axe but the grace of a scalpel. The trigger warning at the start is warranted, though, even with the aforementioned grace with which those issues were addressed. I wouldn't recommend this book to anyone with certain *cough* controlling *cough* political views on people's bodies, as this is a story about the liberation of bodily autonomy.

I wouldn't quite define it as SciFi, since I prefer to think of similar titles as space fantasy (think starwars) due to the existence of a magical system that doesn't necessarily hinge on an advancement in technology. That said, the technology in the universe is certainly more advanced than ours and the author entwines both to weave an intricate and fascinating backdrop for the story to take place in. Specifically I appreciated the unusual political circumstances that were enabled by the setting.

The protagonists were, perhaps, the most vibrant aspect of the storytelling. I quickly found myself very invested in their character arcs and struggles, beyond simply liking them. The story really shone in the small moments of celebrating simple agency and autonomy, brilliantly using the magical system to create a philosophical circumstance to explore the self-determination so central to the plot.

All in all, I think it was refreshing and tasteful. I've already seen a few reviews by people who get mad over certain issues that they insist are political and "irrelevant to the plot", but those sorts tend to get offended by anything that doesn't exclusively represent them and their politics; their reviews don't carry significant weight for this reason, by my estimation. My only real criticism is that it was too short and I was left wanting more.

A short and interesting read with a different take

A failed invasion has left a network of connected space stations and a strange way of living, navigating between them. In a ship, where every resource counts, your meals will be even more subject to scrutiny... and it's worse if you expend your calories performing magic that has no purpose for the community. In this context, a girl will escape and find a new life among two people that will complement her and show her all that she was missing, where the partnership will bear all kinds of fruits.

Tragedy, as usual, will strike, and the girl's family will do all in its power to recover her...

A fantastic reading by Ashley Eckstein!

My thoughts are all over the place with this book. But Eckstein was outstanding as always

Enjoyable Story, Takes off in Second Half

I'll do my best to be descriptive and not give any spoilers!

I'm not going to lie, the first 1/3 of the book wasn't holding my interest. There was a lot of factual world building that was a lot to take in, and there wasn't much indication of where the story was going - I love world building, but character development is my real jam, so world building sans character development is difficult for me. Once the main character Pent meets the other main characters, though, the story started to gain my interest and I thoroughly enjoyed the second half of the book. I'd be interested in reading a follow up story about the characters!

There is a warning at the beginning of the audio book, but if mention of intense calorie counting is triggering, you should definitely steer clear. The mentions aren't super detailed or for weight loss purposes, just mentioned frequently in the first 1/3 of the book as it's required for the lengthy voyages the ship takes and doling out the available nutrition is part of Pent's job. It is mentioned during the rest of the book, but a lot more rarely and even more vaguely than before.

I thought the way the story resolved was interesting and a bit unique, I was pleased!

I really liked the combination of ether and science fiction, the world is an interesting one for sure!

The writing is very straightforward so I think the audience could be as young as 12, but there are some more adult concepts - pregnancy and choosing what children are worth while for the ship, and a lot of emotional abuse by Pent's family, so it depends on the young adult whether it is an appropriate read. (I should mention that I'm an adult in my 30's.)

As for the audiobook reader Ashley Eckstein, I'm a huge fan, so I'm probably pretty biased, but I loved her reading the story. She has a fairly young voice, but it fits the characters so well.

I love the author, I adore the narrator, so I kinda just bought it blind lol. I had also heard amazing things about it on twitter and it seemed interesting. The book starts really really slow with a world building prologue, and then is split into 3 parts.

Part 1, the first 1/3rd of it, is absolutely fantastic. Building a word one intriguing bit of info at a time, figuring things out *just* (or sometimes well) before the character does and sharing in the horror of this weird world the author has dropped us and her into. Wondering how it'll work out, what will happen when the Long Awaited Day arrives.

And then part 2 starts and everything kinda just? works out? perfectly. for the rest of the book.

At first I was happy! The stakes in part 1 had set me up to expect a LOT of conflict and issues in part 2, and I was pleasantly surprised and happy for the character that everything was, for once, going well for her.

But then it just kinda, always went well? The stakes that had been so high before just disappeared with some bread and oil and charming boys lmao. To the point that by the time there *was* some conflict in part 3, I just was listening to it to finish it. I didn't care lmao. I still wanted them to have their happy endings, but the story had well and truly lost me.

That being said, the narration was FANTASTIC, the added bit of audio editing was a nice addition, and the world building, tho a bit clunky at times, was REALLY intriguing.

And the story, to be fair, probably would have appealed to me a lot more if I was the target audience. I am 28 now, and heckin love YA fiction (let's be honest, it's a genre all on its own that there isn't really an Adult version of, sadly) but I *am* a 28 year old woman and that will color my reception of, well, everything I consume lol.

So, 10/10 for narration and sound editing, 6/10 for story, a solid 8/10 for world building (more books set in this world would be fantastic, not gonna lie). But take my review with a grain of salt (/pinch of sugar? how does that saying go??). I don't regret buying it at all, my sister IS the target audience and she will likely adore it.

A Good Story. Not A Big One

Aetherbound is the story of Pent Harland. It is set in a world that is intriguing and wonderful. A solid backdrop for any Space Opera story with room for epic battles, heroic sacrifices, and all manner of daring do. However, this story is not about those things. It is the story of Pent Brannic who at 17 years of age escapes from her family and finds that life doesn't have to be what you find at home. Life can be so much better.

I understand why some people could be disappointed by this. It is E.K. Johnston, the famed Star Wars writer in her very own IP and world. And like I said, it is a fun and intriguing world with an interesting mix of hard sci fi and actual, literal magic. If you go into this expecting a grand adventure you will be disappointed. If you go in expecting a story of damaged people who find ways to grow and accept themselves you will find exactly what you're looking for.

This isn't Star Wars. This isn't Star Trek. It is definitely not Battlestar Galactica. It's the Fisher King in space. It's the story of a girl escaping an abusive family to join a supportive one. And it is everything I needed with all the craziness in the world of late.