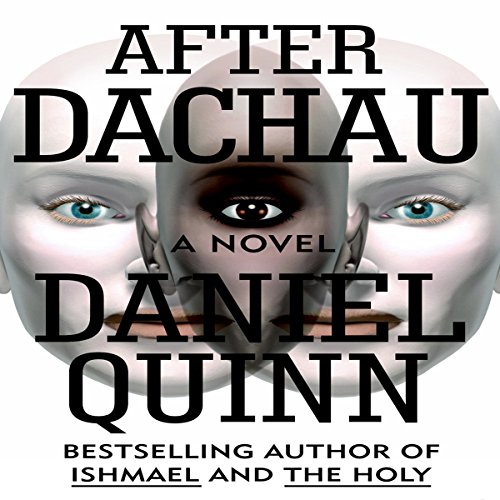 Daniel Quinn, well known for Ishmael - a life-changing book for readers the world over - once again turns the tables and creates an otherworld that is very like our own, yet fascinating beyond words.

Imagine that Nazi Germany was the first to develop an atomic bomb and the Allies surrendered. America was never bombed, occupied, or even invaded, but was nonetheless forced to recognize Nazi world dominance. The Nazis continued to press their campaign to rid the planet of "mongrel races" until eventually the world - from Capetown to Tokyo - was populated by only white faces.

Two thousand years in the future, people don't remember, or much care, about this distant past. The reality is that to be human is to be caucasian, and what came before was literally ancient history and has nothing to do with the living.

Now imagine that reincarnation is real, that souls migrate over time from one living creature to another, and that a soul that once animated an American black woman living at the time of World War II now animates an Aryan in Quinn's new world, and that due to a traumatic accident, memories of this earlier incarnation assert themselves.

Compared by readers and critics alike to 1984 and Brave New World, After Dachau is a new dystopian classic with much to say about our own time, and the dynamics of human history.

"Provocative, Orwellian... [an] absorbing cautionary tale." ( Publishers Weekly)
"Hairpin plot twists that spin wildly from mass genocide to the rediscovery of abstract expressionism.... After Dachau is a rare moral thriller in the tradition of Fahrenheit 451." ( Village Voice Literary Supplement)
"A ghostly and subtle thriller/fantasia/parable about (more or less) how we conceive of history, identity, time. Think Brave New World." ( Esquire)

Perhaps this book is best categorized as an alternative history set well into the future. It took me some while to get into the story because it presents the unimaginable, well almost. America and Europe dominated by Ayrans and Jew and Blacks have been rounded up and deported or eliminated, along with the mongrels (Mongols) - the equivocation about deportation is that the author leaves it is a dangling hook - quite clearly the resettlement of Afro-Americans in Africa is really extermination. One of the central characters is the scion of a wealthy family who comes across a strange book about reincarnation, which is apparently based on a true story, and then meets up with the young woman who refuses to believe who she is and claims to be a black woman who died a long time ago. Essentially the plot follows the trail of the memories of the young woman deep under New York and eventually most of the claims she makes are validated. The final question appears to be: “Who cares?” Indeed, after listening to this book twice to be quite sure I hadn't missed anything, I realized how history can be manipulated and events cease to exist. The title is a tease so I won't give any clues. I found the book enjoyable but confronting.

4 of 4 people found this review helpful

This is only my second Daniel Quinn book, and I'm hooked. If you are looking for a book to make you think, you've found the right author and the right book. There are so many levels to the story and so much to think about. A masterfully written work, the relationship between the characters draws you in and holds your interest until the story expands to the broader issues and more complex questions that make you think about society in general. A great book to raise questions an make you think

Daniel Quinn is the most inspirational author I've read in my life. However, this is not his best work. The story was a bit hard to follow. I had trouble figuring out the plot for quite some time. His breakdown on the Jewish control was fascinating, but I didn't need all those pages wrapped around it to get to the meat. It's the kind of story I'd probably get more out of a second time, but that's not going to happen.

Aren't we all the descendants of war criminals?

"No One Cares!",
Why would anyone?
Genocide by our ancestors is not really emotionally engaging!, we are here exactly because our ancestors dominated and prevailed by eliminating competition and diversity,
And most victims of Genocide will end up practicing genocide against "the others",
So why play the game of victim and perpetrator?, when we are both?
That's disturbing I have to say,
And I wouldn't settle for that,
I chose Morality, but it's an insightful perspective to view history from!

A very imaginative, engaging story. Both the writing and the narration were enjoyable. A very good listen.

History is an agreed upon fiction

Would you listen to After Dachau again? Why?

I may listen to bookmarked sections to find a topic to learn more about.

What does John McLain bring to the story that you wouldn’t experience if you just read the book?

Not a thing but he did a good job.

I laughed out loud a few times and was really moved to sadness at others.