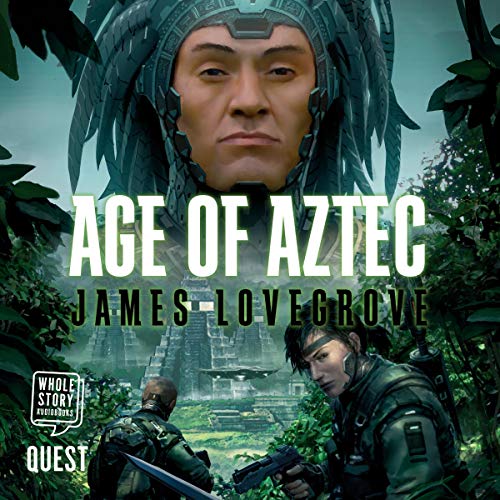 Written by: James Lovegrove
Narrated by: Andy Cresswell
Try for $0.00

The date is 4 Jaguar 1 Monkey 1 House November 25th 2012 by the old reckoning and the Aztec Empire rules the world. The Aztecs' reign is one of cruel and ruthless oppression, encompassing regular human sacrifice. In the jungle-infested city of London, one man defies them: the masked vigilante known as the Conquistador.

Then the Conquistador is recruited to spearhead an uprising and discovers a terrible truth about the Aztecs and their gods. The clock is ticking. Apocalypse looms, unless the Conquistador can help assassinate the mysterious, immortal Aztec emperor, the Great Speaker. But his mission is complicated by Mal Vaughn, a police detective who is on his trail, determined to bring him to justice.

"Higher on action and violence than Lovegrove’s previous books, the novel still manages to portray convincingly the psychology its two antiheroes, and paint a vivid picture of Aztec lore." (Guardian)

What listeners say about Age of Aztec