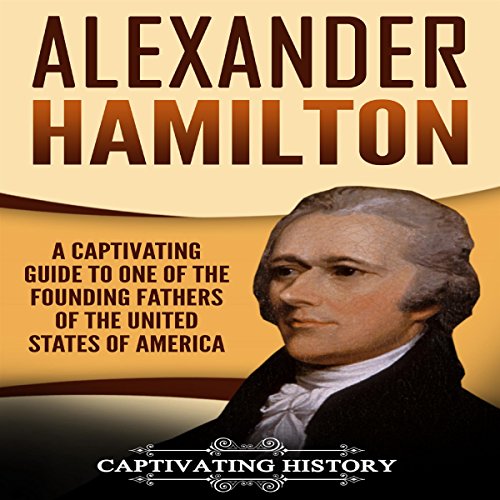 Alexander Hamilton: A Captivating Guide to One of the Founding Fathers of the United States of America

Written by: Captivating History
Narrated by: Duke Holm
Try for $0.00

Alexander Hamilton is one of the most extraordinary figures in American history. A deep thinker, a military leader, and a political dynamo, he was George Washington's right-hand man and perhaps the most important figure in the shaping of the Constitution. His policies and practices in government set the United States down a path of commercial wealth and economic stability. His ideas still resonate in the powerful nation he helped create.

During his time, Hamilton was a divisive figure. A political extremist who antagonized the conservative parts of the new republic while protecting its former opponents. The man at the heart of the nation's first major sex scandal. A political operator whose actions outraged opponents and eventually led to the duel that cost him his life.

It was an extraordinary life, made more extraordinary by Hamilton's origins. He was an outsider, an immigrant from the Caribbean who arrived in New York to make a new life for himself. In doing so, he helped to shape the framework of politics and commerce in America. In retrospect, the amazing thing about his fame is not its recent resurgence, but that it took so long for him to be widely recognized.

This audiobook tells the story of Alexander Hamilton. The story of a nation born in blood, in struggle, and in the dynamism that immigrants could bring.

This audioook includes captivating stories and facts about Alexander Hamilton's:

Listen to this audiobook now to learn more about Alexander Hamilton!

What listeners say about Alexander Hamilton: A Captivating Guide to One of the Founding Fathers of the United States of America

Alexander Hamilton has inspired me

I learned a lot about Alexander Hamilton. The book covered his whole life. This book describes a man that made a huge influence on our society, in a short well written book. It's amazing what you can learn when you take the time to read into someone's life, especially someone as significant to history as this. One of the reasons I picked this book up was a desire to become more familiar with Alexander Hamilton.

Major player in our country's founding.

The author does an exceptional job in cooling an curiosity that is only natural in regard to such a multi-faceted man. Highly recommended piece, and very well translated.

If you don't know much about Hamilton, this is a decent starting theme. It's easy to read, truthful and delivers a great understanding of his life and relationships.

I would highly recommend because it is more than just historical facts. I feel like I truly know the real Hamilton who contributed so much, flaws and all.

A true man, a true american.

Indeed most Alexanders are greatly known throughout history however Alexander Hamilton is often missed out or not given attention to. So for a change I grab a history book and it took me back to my History Class introducing me to important personalities like him and was thrilled to know how relevant his contribution to US specially in banking and currency system which is still widely used today.

An historian, a ledgend.

Actually, I earlier read about George Washington and picked to examine about other men such as Alexander Hamilton and this is the principal book I have come across Alexander Hamilton was an incredible man and I have read and saw why he is still recalled till date.