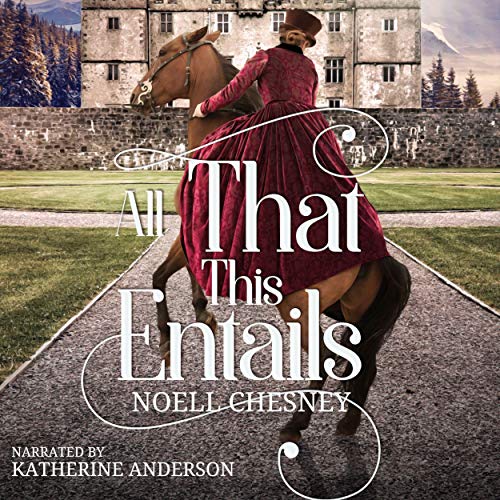 All That This Entails

Written by: Noell Chesney
Narrated by: Katherine Anderson
Try for $0.00

I am the daughter of a duke!

Elizabeth Bennet could scarcely credit the news when a letter sent to her father, from relations she did not know existed, informed them that untimely and unfortunate events would result in Mr. Bennet inheriting the dukedom of Everard. In the blink of an eye, the Bennets' lives are transformed - Elizabeth and her four sisters are wealthy, titled, and the talk of the ton.

But Darcy’s heart still belongs to her, as much as it ever did, and he sets off for London determined to win her hand. But can he prove to her that he has changed, particularly when her entire life has just altered?

This Pride and Prejudice variation is a novel-length tale using the characters of Jane Austen in a story of the author's imagining.

What listeners say about All That This Entails

Narration almost had me return the book

There is very little to distinguish between the voices of the characters either male or female, and the high pitched voice for all is grating.

Great narrator, I enjoyed the story. It did lag at times and I wasn't 100% convinced that Mr. Bennet and Mr. Wickham would behave as they did, but I like the premise. I feel like it over-quoted the well-known lines from P & P too much, but on the flip side, it sounds era appropriate. Overall, I would definitely recommend it for those looking for a clean, fun, and original take on the classic.

I love stories like this that make them equal. the love story is still epic even tho she is now above him in standing, it's nice knowing she would still chose him in the end.

Really enjoyed this, and more than once!

Good story, well read, but most of all sooo nice to see all of the Bennet girls finally receive the elevation in rank and situation and all that goes with it....including putting Miss Bingley in her place. The addition of Duchess Agatha as a mentor is really nice as well. There were still contentious moments, but fewer barriers and a lovely romance.
Have listened to it several times and it always brings a smile to my face.

Loved it. BUT why have Georgiana die early?

It was a great story until you had Giorgiana die at 32. I mean the rest of the story was a happy ending so why not give her one? She's a sweet girl and it's kind of mars Mr. Darcy's happiness with Elizabeth and the rest of his life. Otherwise, this story gets five stars.

I thoroughly enjoyed this book. Well written and lots of goings on. Great JAFF. Highly recommend this book to a Jane Austen fan fiction lover.

I liked the story line in this P&P variation. I actually did not want to stop reading the book. The narration was good. I recommend to anyone that appreciates a good love story. I will seek out more books/audible by this author.

I guess I liked the cover. The narrator was good. It’s always welcome when they pronounce the word “mien” so you know what they mean. It was used three times. Good word.

A circumstance of fate

A circumstance of fate has Mr. Bennet in line to inherit a Dukedom. This changes the fate of family and those around them. The dowager duchess is there to lead his family into their roles, for we all know some Bennets require more guidance than others.
This story is enjoyable and the narrator was good with the various characters.

I really enjoyed this scenario of our favorite characters still living in modern times with new opportunities. Such a fun read with minimal screeching from Mrs. Bennett and Lydia. Loved the story of situations changing turning all previous stations of society turned upside down. So so narration. Wish it was better but maybe in the future a better narration will be available.