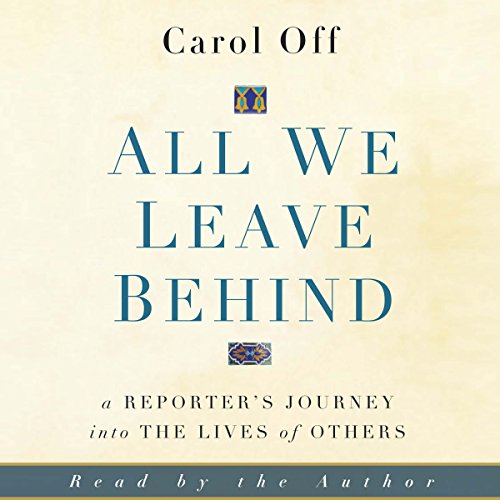 All We Leave Behind

An incredible work of non-fiction that reads like a thriller, All We Leave Behind is the true story of a family fleeing the death sentence of a ruthless warlord, written by the journalist who broke all her own rules to get them to safety.

In 2002, Carol Off and a CBC TV crew encountered an Afghan man with a story to tell. Asad Aryubwal became a key figure in their documentary on the terrible power of thuggish warlords who were working arm in arm with Americans and NATO troops. When Asad publicly exposed the deeds of one of the warlords, General Abdul Rashid Dostum, it set off a chain of events from which there was no turning back. Asad, his wife, Mobina, and their five children had to flee their home.

The family faced an uncertain future. But their dilemma compelled a journalist to cross the lines of disinterested reporting and become deeply involved. Together, they navigated the Byzantine international bureaucracy and the decidedly unwelcoming policies of Stephen Harper's government until the family finally found a new home.

Carol Off's powerful account traces not only one family's journey and fraught attempts to immigrate to a safe place; it also illustrates what happens when a journalist becomes irrevocably caught up in the lives of the people in her story and finds herself unable to leave them behind.

"[C]aptivating prose and painful honesty.... Off has pulled off the veil and ignited a conversation about the moral obligation of journalists in the field.” (Winnipeg Free Press)

"[Off] deftly weaves together a taut narrative that shuttles from a history of politics in Afghanistan and neighbouring Pakistan to episodes as a foreign correspondent covering Canadian forces in Kandahar.... Throughout the book, Off struggles with the moral imperative behind her profession.... The journalist’s best day may be someone else’s worst.... All We Leave Behind is a fascinating tale about how one reporter’s request turns an extraordinary family’s life upside down, combined with a cogent examination of her own attempt to hold on to her humanity.” (Quill & Quire)

“[R]iveting.... [All We Leave Behind] is at once history lesson, political-science course, biography and scathing indictment of both Canada’s and the United Nations’s refugee programs.” (The Collection)

What listeners say about All We Leave Behind

An incredible story, written beautifully, read perfectly. I have a new respect for Afghanistan's history.

Absolutely loved how truthful and honest this was. Fascinating look into the journey of refugees. Gives an interesting look into the machinations of our government also. Thank you to Carol Off. Very inspiring.

Subjective narrative—-strange for a newsreporter.

Can’t help shaking my head at the author’s naïveté; she seems to take everything she’s told as gospel. It’s surprising how this journalist suspends suspicion so readily.

Profoundly moving in all of its humanity

Personal, daring ,honest expression of all of the gains and losses when one chooses to lead a life based on their values and truth. As a first generation immigrant I felt the story in my bones.

A movie waiting to happen

This book needs to be made into a movie. It would be fantastic if the refugee family could benefit from the hell they have had to live through.

Carol Off has done an amazing job writing this and following through to help this family.

I believe that if Carol had not interviewed this man, became connected to him and his family and most of all written, so honestly about what became of her interview, this family would not be alive even if they had conformed to whatever government was in power.

The facts and stats Carol uncovers are astounding. This will open your eyes to what refugees go through, despite all the help from good meaning people and organizations.

Gripping history of North American involvement in Afghanistan and how people were impacted.

A deep dive into the historical and sociological factors that brought us world shaping events including 9/11 and how one family who spoke up for truth, faced suffering. In this time of millions trapped on the refugee highway, this book is important reading to inform global and personal compassion. Well done by a Canadian journalistic icon, Carol Off.

I have been listening to Carol Off for years so when her book arrived I was happy to read. Her experience is vast but this account gives me more details into her reporting life and a reporters effect on her subjects. Very well done. I’ll continue anew to listen. Thanks.