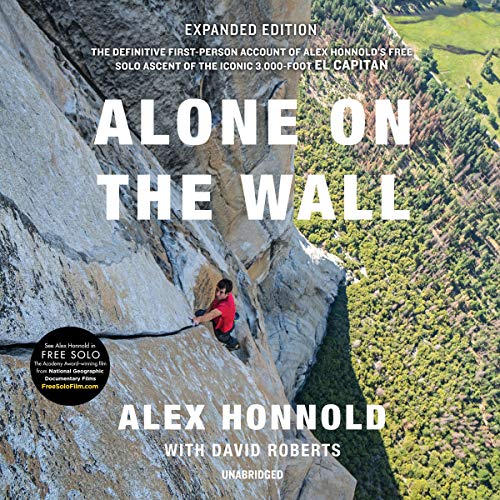 Alone on the Wall (Expanded Edition)

On June 3rd, 2017, Alex Honnold became the first person to free solo Yosemite's El Capitan - to scale the wall without rope, a partner, or any protective gear - completing what was described as "the greatest feat of pure rock climbing in the history of the sport" (National Geographic) and "one of the great athletic feats of any kind, ever" (New York Times). Already one of the most famous adventure athletes in the world, Honnold has now been hailed as "the greatest climber of all time" (Vertical magazine).

Alone on the Wall recounts the most astonishing achievements of Honnold's extraordinary life and career, brimming with lessons on living fearlessly, taking risks, and maintaining focus even in the face of extreme danger. Now Honnold tells, for the first time and in his own words, the story of his three hours and 56 minutes on the sheer face of El Cap, which Outside called "the moon landing of free soloing.... A generation-defining climb. Bad ass and beyond words.... One of the pinnacle sporting moments of all time."

What listeners say about Alone on the Wall (Expanded Edition)

Good book. It was interesting to gain some insight into Alex’s psychology. I always though he was simply a psychopath unable to feel normal emotions like fear. This book provided his perspective which was interesting. The book did a good job keeping my attention. Certainly not an amazing book but worth a listen.

Great book even if hard to grasp for a non climber. Well narrated! It gives great insight into Alex's Free solo of El Cap and the lead up to it.

I loved this audiobook and purchased it, because I watched the Academy Award winner Documentary for Free Solo which was awesome. Alex Honnold is such a good human being, and the only Climber to sucessfully ascend The Cap in Yosemite in 3hours and 56 minutes , without using any rope, and this was a spectacular feat and unprecedented. Just wish that he would have narrated his story , because that would have made it 10 out of 10.!

I think Alex is an amazing climber, but I can’t help but point out the fact I feel a bit complicit here in glorifying the motivation of free soloing for attention and sponsorship when many of these climbers end up falling. I like Alex, but I hope there is some way for him to evolve past just doing these climbs as I think there is a lot more to go after as an alpinist vs just a climber. He has made a name for himself so hopefully he can continue to evolve and live a long life.

Alex one hold at a time

What could have been an exhilarating journey, was a surprisingly bum read with way too much filler. This could be a fun read at three chapters long. Disappointing.

I'd you are a climber and can really truly appreciate technical climbing language then you may be able to hang on and finish book just to read about Alex's climbing feats. If you are a just a reader of outdoor non- fiction who loves to learn about other adventure sports and exciting outdoor stories, don't waste your time. There are a lot of stories that may be exciting If you are a climber, but the writer fails to make them seem so or even make me care what will happen to the individuals in the experience. I ended up not finishing and skipping around since overall, I ended up with an actual dislike for Alex, the main subject. Found him selfish and inhuman most of the time, at least from the perspective of the book. Although to be fair, people who are " genius" in their own field often come off that way whether or not they are. Overall boring and uninspiring to a non rock climber.

The narrator for 'Alex' is incredibly obnoxious and doesn't seem to understand his personality at all. I gave up because of that. While Alex might not be for everyone, in this book, he comes off as a self-entitled a#*$ole, rather than a person who really has no filter. For climbers who have been paying attention, there is also very little new information, so far as I have read, which you wouldn't already know.

would be more interesting if he didn't include his opinions. carbon foot print blah blah blah...

filling in these details completes the experience

As an ex boundary pushing alternative athlete from the seventies I'm able to vicariously understand how badass this achievement truly is.. Alex, you DA MAN EXPONENTIALLY. As your peer group already exist at such a high level, your evolution is in another stratosphere.

I enjoyed this book, but it was a little confusing with different narrators. I saw the movie Free Solo and this book doesn't bring anything new although it gave a more in depth view of the mind of Alex. All in all a nice book.

Before reading this book I saw Alex Honnold as somewhat of a pretentious blowhard that tries to act nonchalant.
My expectations were low, and I was actually pleasantly surprised. Pretty insightful book, with some interesting first person accounts.
I did internally roll my eyes when the topic moved to climate change, but I at least appreciate him not having double standards.
When you’re as talented as Alex, and have the ability to inspire the human race, you put up with the cost of documenting your stories.
I still don’t see Alex as incredibly genuine, but did enjoy his story, and the majority of his writing.
What a mentally and physically special individual who had pushed rockclimbing and the idea of what is possible to new heights.

Struggled to finish. I thought it would be more relatable to the average Joe. I do admire his courage and athletic abilities.

Beautiful and keeps me on edge and really great al

Beautiful and keeps me on edge and really great always fun and makes me love climbing more.

Pretty fascinating guy. I've listened to this book 5 times since I purchased it and it still hasn't lost its luster. Honnold is a very unique person and it's still hard to comprehend how he can do what he does. worth a listen for sure.