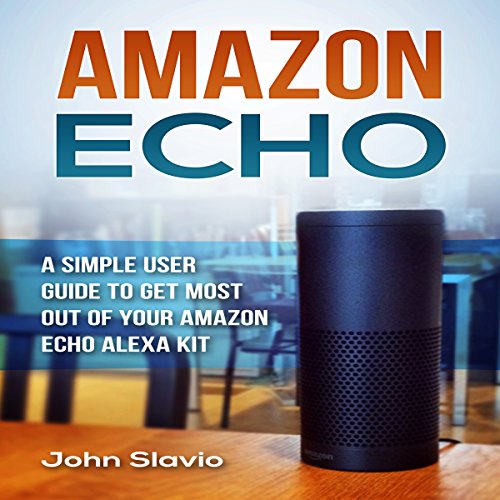 A Simple User Guide to Get the Most out of Your Amazon Echo Alexa Kit
Written by: John Slavio
Narrated by: Stuart Landell
Length: 1 hr and 2 mins
Categories: Science & Math, Technology

The Amazon Echo is a smart device developed by Amazon to give voice responses to various queries. The Amazon Echo is a wireless speaker which has an in-built seven-piece microphone array. The device uses the wake word Alexa but you can change it to either Echo or Amazon. The Amazon Echo device is capable of voice communication and can perform voice interaction tasks such as streaming podcasts, music playback, providing real-time information, playing audiobooks and making to-do lists, among others. The Amazon Echo can also be used as a home automation device to control smart devices such as your home lighting.

The device works by actively listening to speech within its environment as it waits for the wake word to be spoken. The Amazon Echo also comes with a voice-activated and manual remote control that you can use alongside the wake word. To turn off the audio processing unit you may also do it manually by using the mute button on the system. For the Echo to work effectively, you need a low latency Wi-Fi Internet connection that allows for the least processing time. The device's voice recognition software uses the Amazon Common Voice and the Amazon web services platforms from IVONA, Yap, and Evi.

In this book you will learn some of the basic and unique ways to integrate Alexa into your daily life:

helpful guide for my amazon echo

I got this guide since i just got my new amazon echo and have no idea how to use it. I listened to this and definitely gave me all the details I should know. I can now show off to my friends what my echo can do. I never knew I can do almost everything with it and makes my life easier.

Great intro to the Amazon Echo

The narrator was very clear and entertaining.

This book turned out to be very informative and the author has given the reader a plethora of ideas and options on how to make better use of your Amazon Echo. It is one of those books that should be in your home, like a cookbook- it has many recipes.
There are some suggested skills listed for Alexa that I found to be in desperate need of improvement:
Angry Bard, Shower Thoughts, and Knock Knock jokes, but that's my opinion. It's the perfect audiobook that will give you tips to use on Alexa while you're using Alexa.
The narrator is the perfect fit for this book. He reads it with personality and enthusiasm.

I actually won an echo and I never really knew how to use it so I downloaded this audiobook and I have never been more excited to have won something! This tool has so many functions!

I must admit I expected this to be extremely boring and difficult to get through but I was pleasantly wrong. It flowed nicely which allowed me to be able to take it all in. For a person like me who thinks I know everything I need to know about the gadgets I use this audio book gave me some good insight on the echo and told me about features I wasn't aware of. Overall good book.

This book is very imformative and helpful. The narrator read it all in a nice clear understandable tone. Now im ready to explore amazon echoe with confidence.

This is an informative and easy to understand book about the Amazon Echo. The narrator does a good job of speaking so that the listener can follow and understand what is being said. The book is short but informative. Easy to follow directions on what is needed and what to do to set up and use your Amazon Echo.