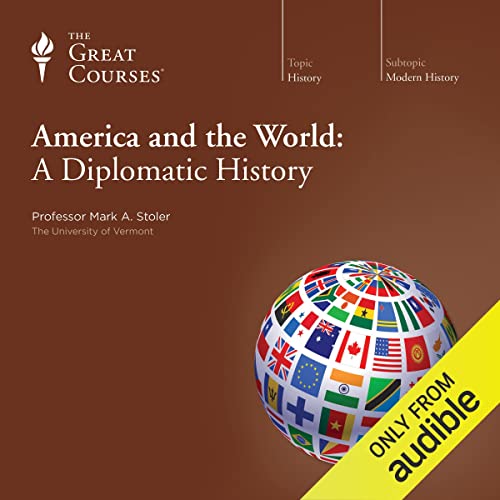 America and the World: A Diplomatic History

In barely more than two centuries, the United States evolved from a sparsely settled handful of colonies into the most powerful nation the world has ever known. How could such an implausible metamorphosis have occurred? These 24 insightful lectures address that penetrating question and many others. Professor Stoler offers you a fresh view of America's shift from the periphery of international politics to its very center as he explores the key components of American diplomatic history, including the origins of American beliefs about our "mission" and proper place in the world; the expansion of the original United States across the North American continent through war and treaty; the achievement of victory in two world wars; and the 45-year cold war with the Soviet Union.

You'll also learn the origins and evolution of famous or significant pronouncements and policies, including Washington's Farewell Address, the idea of "Manifest Destiny", the Monroe Doctrine, the Open Door policy, isolationism, the Marshall Plan, and the "containment" of Communism. Presenting history's events as only a single part of a much broader whole, Professor Stoler adds the "how" and "why" to the "what" of American diplomatic history. The result is an entertaining series of lectures that will not only deepen your outlook on American history but will prove to you that not all history is made on the battlefield.

What listeners say about America and the World: A Diplomatic History

Very thorough and enlightening. Prof. Stoler has an artful approach to crafting lectures. By continually reinforcing chapter points with previous course material he underlines themes and notable ideologies that help the student understand the motives of various administrations and their posture to world affairs as well as help him form critical analysis of those admin. I'm studying for the FSOT and I consider these lectures essential to my studies.

This is an exceptional history course. First, don't take this course unless you already have a basic knowledge of American history. The professor assumes a base level of knowledge so that he can go straight into the story. He starts at the beginning of American history and goes all the way to George W. Bush. The twist is that the familiar history of America is retold through our nation's approach to international affairs and diplomatic relations. The professor does an excellent job staying organized and telling a comprehensive and enlightening story. My one knock is that the professor gets a little too opinionated as he reaches more modern history. However, he keeps this minimal enough not to distract from the overall quality of the course. I gained new perspectives on historic events, which significantly deepened my understanding of topics that I already knew. I am extremely glad that I took this course and highly recommend it.

I am extremely impressed with Dr. Stoler. He sifted through over 240 years of history and presents the most important individuals and events. He links everything to the purpose of the course, but is not afraid of taking a little time to give valuable breif background to explain events. He never gets lost in a rabbit hole of explanation and his voice is very enjoyable. I couldn't say more good about him or this course!

The only unfortunate thing is that the appropriate scope of it didn't allow for diversion into deeper special dives to suit & satisfy everyones' (my) curiosities.

Wish I could Give This Course 6 Stars

As soon as I saw that Professor Stoler was teaching this course I knew it would be stellar. His course on The Skeptic's Guide to US History was captivating. He succeeded here as well.

This course provides an excellent history of the United States’ diplomatic relations with the various nations of the world from its inception to the 21st century focusing on its rise from a weak country in the 18th century to a world superpower.

Professor Stoler focuses not just on the US’ diplomatic history but chronicles its internal growth as well and the major events of its history. This course could’ve served as a US history course as well and is much more preferable to "The History of the United States, 2nd Edition" course (by a mile).

Most if not all of the lectures were highly intriguing but the discussion of US relations with France and Great Britain after the American Revolution were enlightening and riveting (lectures 4-7). I thought I had heard all there was to know about the founding fathers but his tale of how John Adams took a courgeaous stand concerning war with France that cost him politically was new to me. There are more moments like that which make this a must have course.

It isn't just content or new knowledge that propels this course. I love the professor's presentation style. He doesn’t mince his words and tells it as it is which is refreshing. His frequent attempts to work in sarcastic humor also work excellently.

I had a hard time finding any minuses with this course but maybe the only possible shadow of such would be this: While he is good at providing insight into both the positive and negative historian reaction\critical analysis relating to the legacy of a specific US President, Secretary of State, or strategy, he doesn’t conclude by articulating the opinion that the majority of critics hold so you’re left with both the good and bad reviews, wondering just how has history viewed this person and their accomplishments/failures overall?

I would recommend this course not just for its great diplomatic relations history but also the one from TGC catalog that should serve as THE definitive history of the United States course. This is one of those courses you'll find yourself unable to stop listening to lecture after lecture. Please bring back Professor Stoler for another course!

This was a great collection of lectures, though not as accessible as Mark Stoler's other Great Course, The Skeptic's Guide to American History. This is going to take more time to digest, but still, most worthwhile.

One of the best histories of US foreign policy

I listen to these lectures very often. It helped me understand the history of US and gave me a good overview of the “realpolitik” at that time. I would highly recommend these lectures to all students of history or anyone else who is interested in history of US foreign policy. I am a student of American studies from Slovenia. It takes a lot of time to read all the books to acquire a knowledge of understanding important things that happened in the past. Why waste all the precious time when you walk to the university, drive a car or ride in a train? Here are these lectures of the Great Courses useful and can save you in a busy day. These lectures are short and basic. They helped me understand the American history as a whole, especially the foreign policy in which I am very interested. With these lectures you get PDF file where you can find more information’s and books to read if you find some topic very interesting. One of the best lectures in US history around.

History of the USA and it's diplomacy.

I love the great courses, especially when it comes to history, and this is one of my favorites.

Figuring it to be useful background to today's tense political climate, I was not disappointed. An excellent guide to past presidents and their accomplishments or failures on the global stage. Some of the treaties we've made in the past were quite surprising to read about.

All in all would recommend this to anyone who wishes to learn about where we came from about a nation.

I would definitely recommend this to a friend who is interested in American history. The events are described in an interesting and compelling manner by the professor. I found myself wishing over and over again that he had been my teacher all those years ago in high school and college when I found American history nothing but boring. I learned a tremendous amount --and it was not only painless but fun!