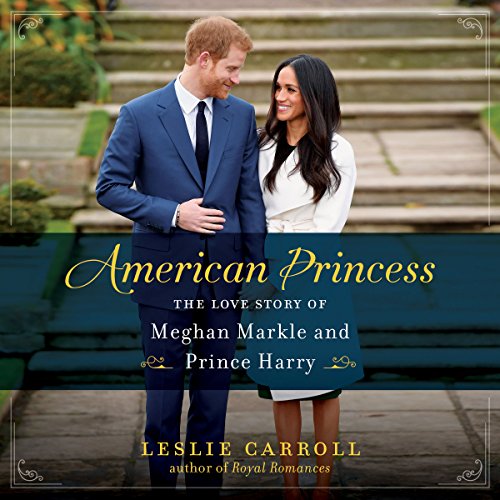 A behind-the-scenes look into the life of Meghan Markle and her romance with Prince Harry - a dishy, delightful must-listen filled with exclusive insights for anyone obsessed with the Royal Family.

Leslie Carroll’s books on royalty are "an irresistible combination of People Magazine and the History Channel." (Chicago Tribune)

When Prince Harry of Wales took his American girlfriend, Meghan Markle, to have tea with his grandmother the queen, avid royal watchers had a hunch that a royal wedding was not far off. That prediction came true on November 27, 2017, when the gorgeous, glamorous twosome announced their engagement to the world. As they prepare to tie the knot in a stunning ceremony on May 19, 2018, that will be unprecedented in royal history, people are clamoring to know more about the beautiful American who captured Prince Harry’s heart.

Born and raised in Los Angeles to a white father of German, English, and Irish descent and an African-American mother whose ancestors had been enslaved on a Georgia plantation, Meghan has proudly embraced her biracial heritage. In addition to being a star of the popular television series Suits, she is devoted to her humanitarian work - a passion she shares with Harry. Though Meghan was married once before, Prince Harry is a modern royal, and the Windsors have welcomed her into the tight-knit clan they call "The Firm". Even a generation ago, it would have been unthinkable, as well as impermissible, for any member of Great Britain’s royal family to consider marrying someone like Meghan. Professional actresses were considered scandalous and barely respectable. And the last time an American divorcee married into the Royal Family, it provoked a constitutional crisis!

In American Princess, Leslie Carroll provides context to Harry and Meghan’s romance by leading listeners through centuries of Britain’s rule-breaking royal marriages, as well as the love matches that were never permitted to make it to the altar; followed by a never-before-seen glimpse into the little-known life of the woman bringing the Royal Family into the 21st century; and her dazzling, thoroughly modern romance with Prince Harry.

What listeners say about American Princess

A super easy read with no new news.

I liked this book, but there was nothing in it that I havent heard before, mostly gossip. But other than that I did like it, it was written well, with alternating chapters.

This story kept me wanting to know more. Being a huge Royal follower I was quite pleased that this was a feel good story with a great start in getting to know the new Princess. I wish the newlyweds continued happiness.

I've read every Harry and Meghan biography released so far, and this is, by far, the best. The author gives some details I hadn't heard before, and chronicles both Harry's and Meghan's upbringing. The narrator is especially wonderful. I was scared by another reviewer's description of the narrator as "robotic." It really isn't. Her voice warms and becomes expressive throughout the book. Andrew Morton's biography of Meghan does go into more granular detail about every stage of her life, but that book is snarky and has an unkind, tabloid feel. This book is pretty comparable to Katie Nicholl's "Kate: The Future Queen" in the depth and sympathy it affords its subject. I think this book is better, though, because Katie Nicholl's accounts are all one-sided and fawning. Instead, Leslie Carroll does a good job here of humanizing Meghan, making her sympathetic and understandable, without sounding like a groupie. Excellent. If you read only one royal wedding biography this season, read this one!

This book was a detailed writing of publicly available interviews and articles about Meghan Markle. I am a fan of hers but want more of an inside story - not stuff I can get off the internet myself.

What made the experience of listening to American Princess the most enjoyable?

I loved the back story of both the Prince and Ms.Markle.

What was one of the most memorable moments of American Princess?

Princess Di's death hit me just like it did when it happened.

I love her first off and she is so expressive in her speech. She brings life to any story for me.

It was I had to turn it off to go to bed.

Thank you for this insightful book I really loved it.

Loved it!!! Such a beautiful couple and story!! I'm so happy for them and wish them lifelong love and happiness!!

This book gives information on Harry and Meghan’s individual lives from childhood into young adulthood as well as details about the couple’s courtship and engagement. I enjoyed listening.

I enjoyed listening to this book about the lovely couple and their unique situation. I would recommend giving it a listen.

Great background on the two of them

This doesn't tell you everything about the two of them but it does fill in a lot of gaps that I had. I've always been "into" the Royal Family. This was a fun listening experience. Highly recommended

There is some contrast to the book Elizabeth the Queen in the facts about the Royal family, including calling them the Wales' when that is not the correct surname. I am only on chapter 2 and wondering about the validity of the rest of the story. I will not listen to another book by this author. Also the book would be better read by an English narrator.

Automated book is this real sounds like a computer?

The narrator of this book is very mono tone and and sounds automated. This made the book dry to listen to dull. Narrator does not sound human this may have been a good book but narator voice, and automated tone ruined the book for me. I do not recommend this book as there are many other books on the royal couple which are read by the authors and are far superior.