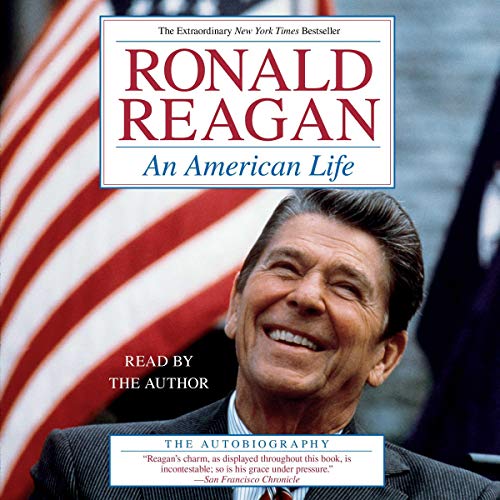 Ronald Reagan is an American success story. From modest beginnings in a small Midwestern town to a distinguished career in films and television, he lived the American dream. As governor of California and as the century's most popular president, he embodied and revitalized the American spirit.

Now, in this dramatic and revealing memoir, Ronald Reagan recounts both his life and his beliefs with uncompromising candor and his familiar wit. He discusses his decision to run for president, historic meetings with Mikhail Gorbachev and other heads of state, his frustrations in dealing with an often hostile Congress, his unshakable faith in the American people, and his enduring love for Nancy, who would always be his First Lady. In a moving passage, President Reagan also speaks frankly about the assassination attempt on his life and its effects on him and his family.

An American Life is a richly detailed, definitive account of a great and historic presidency and of a unique American life, from the man who restored America's confidence and strength and shaped the future of the world.

What listeners say about An American Life

Restored my hope that American can again be great!

Would you listen to An American Life again? Why?

I will likely listen to this one over and over when I need a need a renewed sense of hope and optimism.

Ronald Reagan was much more of a true American patriot than what history gives him credit. I've recently studied several of the great leaders and presidents of our country and strongly believe that he would be listed among our Founding Fathers if he were born a hundred years earlier. Unfortunately, it's rare to find a history book or class in American History that accurately depicts the significant accomplishments of Ronald Reagan. From taking our economy out of the brink of failure and creating one of the longest and most properous times in our history, to restoring respect for our nation's military and making its men and women proud to wear a uniform, he loved his country and believed it's people were the reason for its greatness.

It was great to hear about Ronald Reagan's life in his own words. Many of the stories he relayed were spoken with great humility and transparency. However, if you're interested in hearing the details of his accomplishments, I'd recommend one of the other books written by his closest advisors and friends, because he downplayed many of the historical events, including winning the 'Cold War.' But spoken clearly in this book was his proudest accomplishment from his eight years in office - his economic policies that transformed our nation.

It's hard to pick a favorite portion of the book. Ronald Reagan seemed to have two things that today's Presidents rarely display together - Optimism and Servant Leadership. These are themes that run richly through the text and are strongly conveyed through his voice.

A man with as many victories as what Ronald Reagan achieved during his time in office could write hundreds of pages outlining why history should revere him. But on the contrary, Ronald Reagan was proud of his country and its people more than he was about his policies or successes. I recommend this book for anyone who want a restored hope and a belief that we can again see positive change in our country again.

A good autobiography read by President Reagan, this brings back memories of this great and personable leader. I smiled and laughed and got misty during this brief look back at the Great Communicator.

Freedom is Worth the Struggle

Ronald Reagan details the struggle of those who would take our Freedom away and those who intrust it to us. We must struggle to remain Free. Reagan believed in people, unlike those who tie us up with laws and regulations. Listen to him and follow his example.

Why is not complete?

Where are the other chapters available in the printed version? I didnt know that, so I am a bit frustrated. But the audio was just amazing.

A great leader who is sorely missed

The typical rule of thumb in staying away from authors who narrate their own books doesn’t apply to this writing. Hearing the calm and soothing voice of President Regan reminded me that there was once an age of reason. A great leader who is sorely missed.

I am fairly new into the whole political scene. I always liked what I heard about Reagan. This confirmed my original thoughts about him and made me feel more comfortable with the way things are now. Our country has always been unstable... Either from communist Russia or progressives internally now. Great book!

This is an absolute must read. It's always best the hear the author read his own book. Reagan tells it like it is. It's especially good to hear about the true stories as we already heard the lamestream media give its side. A must listen to.

Nobody could have done a better job of narating this book than Reagan himself. Great Story of his life and great lessons to be rembered from this book

I truly enjoyed this listen!

Would you listen to An American Life again? Why?

Yes! I love listening to hope and Ronald Reagan knew how to speak it.

What was one of the most memorable moments of An American Life?

I really enjoyed the personal moments he shared about He and Nancy in the white house.

A LITTLE DRY BUT STILL ENJOYABLE