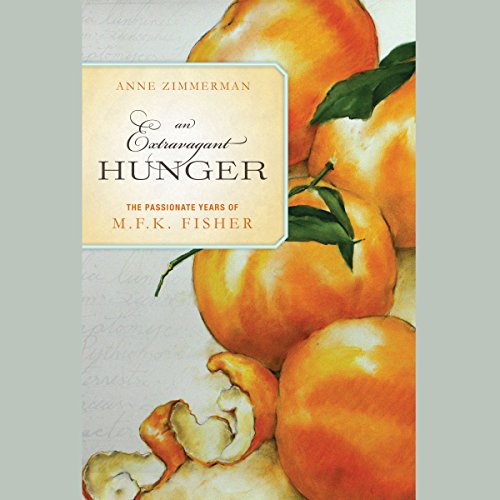 Written by: Anne Zimmerman
Narrated by: Tiffany Morgan
Try for $0.00

In An Extravagant Hunger, time slows and is relished, and the turning points and casual strolls of M. F. K. Fisher's life are unwrapped and savored. From the Berengaria, which washed her across the sea to France in 1929, to Le Paquis, the Swiss estate that later provided a backdrop for some of the most idyllic and fleeting moments of her life, the stories of Fisher's love for food and her love for family and men are meticulously researched and exquisitely captured in this book.

Exploring Fisher's lonely and formative time in Europe with her first husband; her subsequent divorce and remarriage to her creative spark plug, Dillwyn Parrish, and his tragic suicide; and the child she carried from an unnamed father, the story of M. F. K. Fisher's life becomes as vibrant and passionate as her prolific words on wine and cuisine.

Letters and journal entries piece together a dramatic life, but An Extravagant Hunger steps further, bridging the gaps between personal notes and her public persona, filling in the silences by offering an engaging and unprecedented depth of intuitive commentary. With a passion of her own, Anne Zimmerman is the careful witness, lingering beside M. F. K. Fisher through her most dramatic and productive years.

What listeners say about An Extravagant Hunger