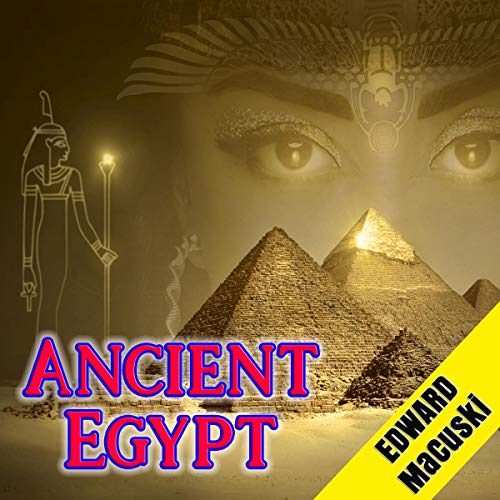 Written by: Edward Macuski
Narrated by: Krista Shirlee
Try for $0.00

In this audiobook, you will find both the history and the mythology of ancient Egypt. This period of time in the Egyptian history is commonly accepted to be between the years circa 3900 BC and 332 BC. These are the years when the land of Egypt was united into a single kingdom and when Alexander the Great, the king of Macedonia, conquered Egypt and forced Queen Cleopatra the VII to surrender to the Roman Empire.

Whether you want to learn more about Tutankhamun, whose tomb was discovered in the year 1922 and filled with gold and riches, or Cleopatra the VII, the famed last queen of Egypt, you will have the opportunity in this book to learn all about some of the most prominent rulers of ancient Egypt. As well as the history of the pyramids, temples, and religion, how the Nile was an integral part to survival, the Egyptian army, and battle practices, how transportation and trade affected life, the daily life of ancient Egyptians, as well as their mythology, time periods, and dynasties.

The life of the ancient Egyptians was not easy. If the water level of the Nile was only too low or high, it would cause devastation. They were isolated, yet they always have to be ready for an attack on the pharaoh and their capital. Upper and Lower Egypt were both quite different and separated, making it more difficult to govern. Yet, in order to live prosperously, both portions of Egypt had to work synergistically. This took the effort of the pharaoh, local governments, and the people. It was not an easy environment to live in, but by working together, the people were able to survive.

What listeners say about Ancient Egypt