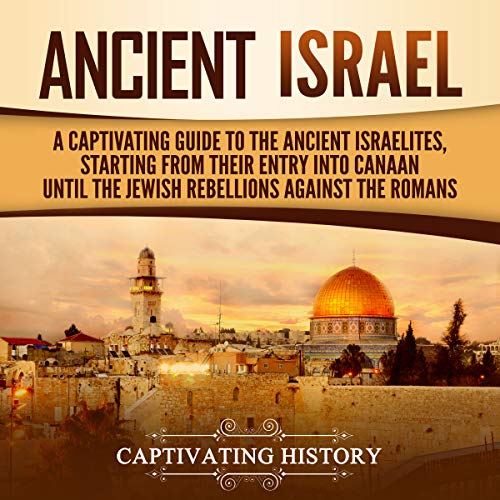 Ancient Israel: A Captivating Guide to the Ancient Israelites, Starting from Their Entry into Canaan Until the Jewish Rebellions Against the Romans

Written by: Captivating History
Narrated by: David Patton
Try for $0.00

Unlike many other ancient peoples, the culture and beliefs of the Israelites exist in modern society. They managed to survive through wars, persecution, and numerous revisions and adaptations caused by new invaders or internal rebellions. Because of their significance in contemporary society, it’s important to learn more about the Israelites in order to fully understand how they developed and managed to contribute so heavily to the current culture of the Western world.

In this captivating history audiobook, you'll learn startling facts about the intriguing ancient Israelites, and when you're finished listening, you might have a discovered things about them that you not would expect.

In Ancient Israel: A Captivating Guide to the Ancient Israelites, Starting From their Entry into Canaan Until the Jewish Rebellions against the Romans, you will discover topics such as

So if you want to learn about Ancient Israel, listen to this audiobook now!

What listeners say about Ancient Israel: A Captivating Guide to the Ancient Israelites, Starting from Their Entry into Canaan Until the Jewish Rebellions Against the Romans

Very easy research could have made this book accurate. Very simple research could have helped the narrator with correct pronunciations. There are too many errors about history where I'm well studied, for me to trust the information on areas with which I'm less familiar. So sad to have spent the money and time on this book.

Mr Patton has absolutely no comprehension of pronunciation. Hearing “Levant” as “leavent” over and over again, along with other garbling of Greek and Hebrew names is too much.

The “history” is confusing, if not outright ideological; the reader has no change of tone while reading, it becomes quite boring. I want to return the book (I reached some 30 listening minutes).

it almost seems purposeful given the insanely high number of misspronountiations words. if you can get past that, it's a good summary of the history of ancient Israel and Judah

This a perfect book on a difficult subject. Believe me it is hard to describe the Ancient Israelites It was perfect length and detail to exceed my expectations. Will definitely follow the author more.

Only referred to in a negative light.

Book was easy listening. I like history and it was direct and to the point. It contained information I had heard of before and I am following him already, indeed a verified person. I was very interested in hearing a different point of view of this history because in the Old Testament it seems they were only referred to in a negative light.

The book is good of three hours and nineteen minutes review of some of the earliest known inhabitants of the Levant.

A history I was't aware.

Everyone's heard of the Ancient Israel Canaanites thanks to the Captivating History author team, but I'm sure only a few know much if anything about them. This helped fill in all the blanks I had.

It is a very good book.

This is a very informative about history of Israel, brief history which is helpful in the study of the Bible. Highly recommend it. Wish it had been a little deeper.