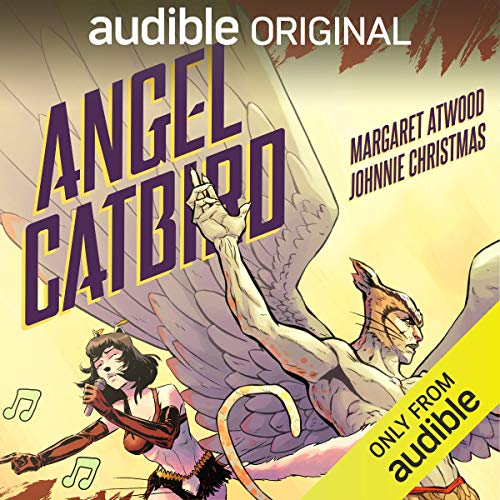 Margaret Atwood, the most prescient and admired author of her generation, presents an original audio adaptation of her latest leap into the comic sci-fi fantasy underground: Angel Catbird.

Atwood wrote this New York Times best-selling fantasy as an homage to the golden age of comic books and the radio hour thrillers she loved as a child - with a little 21st century spice!

Our story: One dark night, young genetic engineer Strig Feleedus is cruelly mutated by his own experiment and merges with the DNA of a pussycat and an owl. What follows is an action-driven, witty, and pulp-inspired all-species revolution. Would you expect anything less?

The television series based on Margaret Atwood's novel The Handmaids' Tale garnered eight Emmys and two Golden Globes. She and her novels have won many literary prizes including the Arthur C. Clarke Award, the Man Booker Prize, the Giller Prize, the Franz Kafka Award, the German Friedenspreis, and a Lifetime Achievement Award from the National Book Critics Circle. Angel Catbird is her first graphic novel and original audiobook adaptation.

What listeners say about Angel Catbird

Trust Margaret Atwood to surprise again. Who would have thought a graphic novel could read so well out loud? An amuse-gueule compared to Atwood's pithier themes.

Very campy and funny! I loved all the sound effects and voice actors! I think I'll get the graphic novel next!

Even the very best can produce nonsense

I love Atwood and devour her books, but this seems like someone found some idle doodling and decided to publish it.

Angel Catbird, the comic book, is Margaret Atwood's tribute to the Golden Age of comics, the serials of the late thirties to early fifties. Not coincidentally, this was also the golden age of radio dramas. It made perfect sense, then, to ask her to turn this into a new form of audio-drama, and it's turned out superb.

I didn't grow up with radio drama, but I spent hours by my portable record player listening to the old DC superman and Wonder Woman read-alongs. This recording brings me right back. The sound effects, the tongue-in-cheek dialog and narration, the goofy story, are as rollicking fun as I remember.

The cast— Canadians all— get the spirit of Angel Catbird: silly and sexy, funny and dishy, and sometimes, deadly serious. Give them an Audie now! It's impossible to single out a favorite, but I especially love David Calderisi as the narrator, having a blast with his scratchy vibrato, and Kelly Van der Burg as Cate Leone is one sexy kitty.

The original music, songs, and radio jingles are a hoot, and the top-notch sound effects add ambiance and clarity. To follow the spirit of the script, a pun-bonanza, they're purrfect.