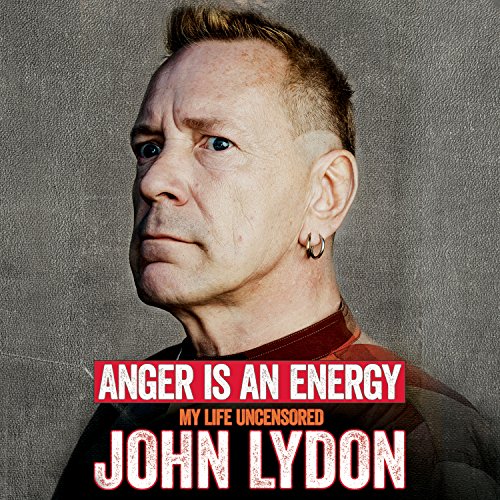 Anger Is an Energy

Written by: John Lydon
Narrated by: Derek Perkins
Try for $0.00

John Lydon is an icon - one of the most recognizable and influential cultural figures of the last 40 years. As Johnny Rotten, he was the lead singer of the Sex Pistols, the world's most notorious band. The Pistols shot to fame in the mid-1970s with songs such as "Anarchy in the U.K." and "God Save the Queen". So incendiary was their impact at the time that in their native England, the Houses of Parliament questioned whether they violated the Traitors and Treasons Act, a crime that carries the death penalty to this day. The Pistols would inspire the formation of numerous other groundbreaking groups, and Lydon would become the unlikely champion of a generation clamoring for change.Following on the heels of the Pistols, Lydon formed Public Image Ltd (PiL), expressing an equally urgent impulse in his character: the constant need to reinvent himself. From their beginnings in 1978, PiL set the groundbreaking template for a band that continues to challenge and thrive to this day while also recording one of the '80s' most powerful anthems, "Rise". John Lydon remains a captivating and dynamic figure to this day - both as a musician and, thanks to his outspoken, controversial, and from-the-hip opinions, as a cultural commentator. In Anger Is an Energy, he looks back on a life full of incident, from his beginnings as a sickly child of immigrant Irish parents growing up in postwar London to his present status as a vibrant alternative hero.

What listeners say about Anger Is an Energy

I think John Lydon's talent is underappreciated in general. I read his first book and was looking forward to this one - but I'm 14 hours into it and I don't know if I can slog through the last four. I just can't take any more of the proclamations of how PiL "changed society" and was "the most influential band in the world." Come on. The book jumps around in time, which doesn't really bother me, but it's often hypocritical or contradictory and short on details of events. I really wanted to love it, but it's just so irritating.

and I cried at parts. More than I expected from what I'd always known as Johnny Rotten. Great stuff.

Not A Dull Moment! Great Read And Honest

Would you consider the audio edition of Anger Is an Energy to be better than the print version?

No, they are two different experiences.

The honesty, the pace of the story carries you along.

What does Derek Perkins bring to the story that you wouldn’t experience if you just read the book?

I grew up a fan! It's great to hear a punk rock pioneer share his experience with what seems to be an honest perspective.

I you like Punk or whatevertheheck PiL is, then you will love this book. There is a raw nerve here and a lot gets examined. Sometimes there is a thread and sometimes it moves along at wobble random--but it's always entertaining. In fact, there is even a surprise 'business' advice aspect of it. I run an 'indy' (read a small and losing money at times) publishing house. The advice Lydon gives about PiL applies directly to me. I found the advice insightful and it helped me, once again, get my head out of my butt on certain things and take a bigger stab for it all. If you want to see a section of time discussed by someone whose seen it all--then this is your book. Give it a whirl and you just might learn something, too.

What a misunderstood man! It was delightful getting to know the heart, the values, the conscience and brilliance of a very deep and thoughtful human being. Misanthrope my ass...this is a man who loves people and animals and life itself! He just has high standards and is brutally honest. The world needs more Johnny Rottens!
Read with such humorous inflections by the narrator I kept forgetting I was not listening to the author himself. Get it! You will live spending time with John Lydon and wish when it’s over you could call him up and go for a pint. I know I do!

I didn't buy this book because I'm a huge John Lydon or PIL fan, I bought it because I have a genuine interest in this period of punk / post-punk or whatever one wants to call it. I also knew that John was a colorful character, so I figured this would be a fun listen.
I'm happy to say that the book exceeded all my expectations. John is very witty and extremely intelligent. Yes, he has a John-centric world view and shouldn't be counted on for an objective perspective, but he is Johnny F-in' Rotten!!! What else would you expect?

The main thing is that this book really makes me appreciate John Lydon a whole lot more. If you are at all familiar with him, and have any expectations prior to reading this, you're probably right. However be aware that you're in for the very best possible version of what you might already expect.

What did you love best about Anger Is an Energy?

Lydon is honest and transparent. To get through the plastic "style" and "image" of the music machine and stay true to the heart is a great accomplishment. Very enjoyable listen!!!

Keep it up Johnny. Good Work!

As a life long fan of the Pistols and Johnny, I loved this book. Voice actor was great as well. He really nailed all of Johnny’s mannerisms

God save the Queen

My only complaint is I wish John read it himself. Other than that great narrator and even better stories. Worth the listen!

Rotten has an interesting life that could have been summarized in half the time. He is a bit hypocritical at points not clearly sticking to whether he likes or dislikes someone or something. Unfortunately, I wasn’t a big fan of PIL, so his I was more interested in the Sex Pistols and his personal life which he gives his side of. PIL didn’t suck, but weren’t great either IMO. I liked Steve Jones book better. Perhaps because Steve narrated it himself, and to be honest he is more entertaining to listen to, and doesn’t take himself or ego as seriously as dear old Johnny who does drone on through a lot of the book. NVMTB is no doubt a fantastic record for many reasons. A group of people who disliked each other, naive to the business, and played by Malcolm and company created such an amazing record with sound and lyrics just as relevant today as in 1977. My take away from the book is that I agree with John’s opinions on a lot of things. I also think he would be a giant pain in the ass to work with.