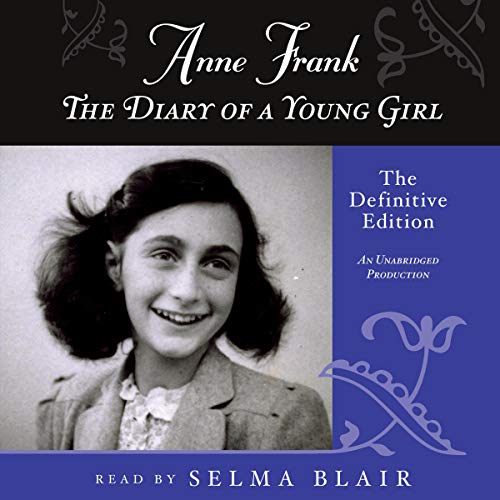 Anne Frank: The Diary of a Young Girl

Written by: Anne Frank
Narrated by: Selma Blair
Try for $0.00

Discovered in the attic in which she spent the last years of her life, Anne Frank’s remarkable diary has since become a world classic - a powerful reminder of the horrors of war and an eloquent testament to the human spirit.

In 1942, with Nazis occupying Holland, a 13-year-old Jewish girl and her family fled their home in Amsterdam and went into hiding. For the next two years, until their whereabouts were betrayed to the Gestapo, they and another family lived cloistered in the “Secret Annex” of an old office building. Cut off from the outside world, they faced hunger, boredom, the constant cruelties of living in confined quarters, and the ever-present threat of discovery and death.

In her diary Anne Frank recorded vivid impressions of her experiences during this period. By turns thoughtful, moving, and amusing, her account offers a fascinating commentary on human courage and frailty and a compelling self-portrait of a sensitive and spirited young woman whose promise was tragically cut short.

"The new edition reveals a new depth to Anne's dreams, irritations, hardship, and passions....There may be no better way to commemorate the 50th anniversary of the end of World War II than to reread

The Diary of a Young Girl, a testament to an indestructive nobility of spirit in the face of pure evil." (Chicago Tribune)

“The single most compelling personal account of the Holocaust...remains astonishing and excruciating.” (The New York Times Book Review)

Check out Audible’s list of inspiring quotes about hope. These quotes, passages, and phrases from some of our favourite audiobooks are sure to inspire.

The human capacity and need for hope is astounding. It is one of those universal truths that spans age, gender, and location. Everyone knows what it means to feel hopeless, and what it’s like to find that glimmering ray of hope when everything seems lost.

What listeners say about Anne Frank: The Diary of a Young Girl

An important and beautiful story

I couldn't stop listening to this book. Performed beautifully, you really feel like you are listening to the voice of a teen girl. Anne's dream was to become a journalist and one day, a famous writer. It breaks my heart that she will never know that she became both. In times like this, it is so important that we remember the haulocost. After reading this book, I cried and cried and begged God to stop us from letting this happen again. You really feel like you know Anne after reading her diary. You see that she is just a normal child and teenager. You want to give her a big hug and talk her through everything. Please hear her story, and don't let it go to waste. Remember, there are concentration camps today. Anne's story should serve as a reminder to us, to speak out against racism and oppression. Especially for children. #wherearethechildren

I went to Amsterdam over the summer and obviously, I had to check out the Anne Frank Museum (which was incredible btw). I remember reading this book back in high school but I don't remember a thing. Selma is brilliant in this audible! She is so animated and made this audible so enjoyable.

When I read the original I frequently forgot that this was a young teenage girl. Her vocabulary is very good so it's easy to start thinking of an adult. Selma Blair did such a great job at keeping the fact that Anne was only 14 - 15 years old front and foremost in my mind. I actually think I enjoyed this more than reading the original.

Makes you appreciate everything

This is so well written, I kept forgetting she was only a teenager.
Selma Blair did a wonderful job bringing Anne’s story to love, I HIGHLY recommend this book.
Never forget.

By listening to this book i was feeling like i am also living with the family of 8. It is very inspirational story of young girl. I am so amazed how can someone write that precisely at such a young age. So emotional and must listened book.

sad book but love it, such a tragedy in the 1940s, in two days I've listened to the whole book

Anne Frank's Diary has been on my bucklist to read for years. Finally able to listen to it and had it finished in 2 work days (I listen while I work). Selma Blairs voice is soothing. Highly recommend this version.

I read that s in my early teens many year’s ago and it still holds that emotional punch.

Selma Blair was a good narrator though I found she seemed disinterested sometimes because of the repetitive,

It’s a must read for everyone!!!

Wow I knew what was gonna happen, but I never thought I'd be teary eyed when the reader said that was the end of her diary. And continued to narrate the "Afterword". 🥲

I loved her courage, and her view against laziness and taking the "easy" way of life.

First review I've written - Had to write it

I have enjoyed many audible books before, but I've never felt compelled to write a review.

I had never read Anne Frank's Diary of a Young Girl. I assumed that I knew what it was about and that her diary entries would not hold my attention. I was mistaken on both accounts.

I looked forward every day for a chance to listen to the book. Anne Frank wrote with such emotional candor, eye for detail, and ear for conversations that I found myself wondering many times what she could have written if she had lived. I never grew tired of listening.

Selma Blair's reading is superb. Other readers might have just conveyed the intelligence and the eye of Ms. Frank - Ms. Blair goes further. She captures the adolescence quality of Anne Frank, the "young girl" - the petulance, the exasperation with the adults in the annex - through well-timed pauses.sighs, laughs.

In Los Angeles, where I live, The Museum of Tolerance has a letter that Anne Frank wrote to a pen-pal in the United States. It is a tribute to Audible and Ms. Blair that when I read the words of the letter, I heard Ms. Blair's voice reading them in my mind.

You made a grown man cry

When reading history there is no shortage of dry text that will give the you the facts and dates. What you get with this diary is one real human story against the weight of a ideology bent on killing people like her. I like the style of the narrator, it made me feel like I was hearing the words right from a teenage girl. Anne seems to have been a smart intuitive girl who knew the situation she was in. She also was a teenage girl and her story is not just about hiding from Nazi thugs. It's about her relationship to her mother and father, and about a boy and working out her feelings around all those things. The world would have been a better place with Anne Frank still around. When it got to the part that explained this is where the diary ended tears erupted and would not stop.

Where does Anne Frank: The Diary of a Young Girl rank among all the audiobooks you’ve listened to so far?

What was one of the most memorable moments of Anne Frank: The Diary of a Young Girl?

Her thankfulness for where she was! Falling in puppy love and having hope even when the adults were losing it!

What does Selma Blair bring to the story that you wouldn’t experience if you just read the book?

She spoke to me as Ann! I felt like I was inside Ann's thoughts emotions wishes dreams! I know she is a fully grown woman but her voice gave the innocence Ann deserved to be given! She did Ann justice. I have heard many but none as hauntingly portrayed as she. Although we know the end was horrific. She broke it to use sympathetically as a family member would! Chilling!!

Her last passage! That's all I can say!

I read the children's version as mandatory reading as a child! I wanted to know all there was left. I heard there were other versions but never had the time to read them. Now on my commute to school or cleaning or cooking I can listen and its just awesome!

I Finally Read It!!!...and have been given a gift.

In my ignorance I thought I knew this story without having read it. Even though I have read many books on WWII, I swept by this assuming it was what it seemed to be...people hiding from the Nazis. However, there is so much depth and humanity to this work that it truly deserves its recognition. How one young girl could give us all so much is testiment to its honesty and innocence. If you have not read it and said someday you would...now is the time. There is no reviewing it as it stands apart from any criticism. This is an experience and a human journey that will live with you well past closing the book...hopefully for the rest of your life.

If you haven't read Anne Frank's diary, written over a two year period by a girl in her early teens in hiding from the Nazis, the time is now! I will warn you that this is the entire diary, not the abridged version her father initially published. She talks about sex, her body, and the tension between herself and her mother. Anne gives us a glimpse into the stresses and struggles her family, and the four others in hiding with them, faced as they lived above Mr. Frank's business. Yet, it's not just a WWII story; Anne gives us a well-painted picture of a girl going through the normal conflicts of growing up. This was a book that stayed with me for days after I had finished listening.

I found the reader irritating at first because her voice wasn't the one I heard in my head for Anne, but she did a good job of expressing Anne's feelings in a teenager's voice.

This story is so shocking and amazing at the same time. I love learning about Anne & her family. The horror they went through breaks my heart. I will read this book again for sure!!

I had never read this before, and was a little leery because I normally like fiction and didn't know if it would keep my interest. This was a very enjoyable listen, often funny, and often tear-jerking. Selma Blair does a great job of capturing the innocence, and insight, of the young Anne Frank. Even if you've read it before, give this one a listen!

Heart breaking yet amazing. Educational and a must read for future generations so we never forget.
Loss of great writer

Selma is the perfect narrator

I thoroughly enjoyed listening to this book. I weep for the loss of a great talent in Anne Frank, but Selma brings her to life in a magical way.

The Diary of a Young Girl

A really great reader for this book...