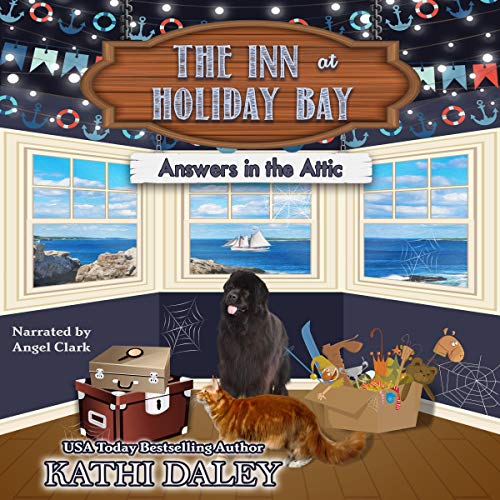 Answers in the Attic

After suffering a personal tragedy, Abby Sullivan buys a huge, old seaside mansion she has never even seen, packs up her life in San Francisco, and moves to Holiday Bay Maine, where she is adopted, quite against her will, by a huge Maine Coon Cat named Rufus, a drifter with her own tragic past named Georgia, and a giant dog with an inferiority complex named Ramos. What Abby thought she needed was alone time to heal. What she ended up with was an inn she never knew she wanted, a cat she couldn't seem to convince to leave, and a new family she'd never be able to live without.

In book four in the series, the remodel is almost complete, and Abby and Georgia are planning a huge grand opening. The only thing left for Abby to do before Lonnie can wrap things up is to go through the items left in the attic by prior residents. Abby is just about to get started when a woman named Trinity Roswell shows up claiming to be the great-great-great niece of Abagail Chesterton, the wife of the man who built the house, Chamberlain Westminster. Trinity, a woman in her 30s, is doing a family history and has questions about Abagail. Abby only knows what she has been told by others, but decides to help the woman locate the information she is seeking. They visit an old cemetery and come away with more questions than answers.

While Abby and Trinity seek out the last of the secrets the house once held, Colt is busy with his own cold case murder, Tanner has a new litter of puppies, Nikki is dating a man Georgia doesn't like and doesn't trust, and Annie notifies Abby about a death in the family.

What listeners say about Answers in the Attic

This is a great story but the narrator has no sense of timing or inflection. Don’t waste your money on the audio version but it’s a great read.