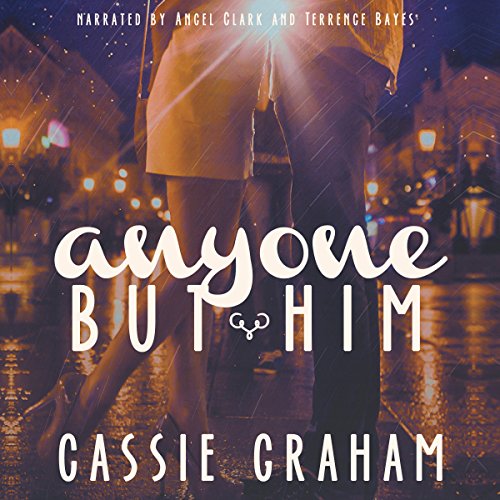 Whitley Hayes is an ordinary girl with a gypsy heart. College is the only constant in her life. She's made a lot of mistakes, and she intends on keeping them in the past. Move on and forget. That's her motto.

Jennings Cohen is no ordinary man - not at all. He would have never imagined his life would turn into such a spectacle. The tabloids exploit him, fans stalk him, and the paparazzi are relentless. It's not always fun being Jennings. It doesn't help that he has a secret, one that comes at a price he's not sure he can pay. Relationships get complicated and hearts shatter. It's not easy living a lie, but it's easier than telling the truth.

What listeners say about Anyone but Him

Listening to the woman's voice was like nails on a chalk board. The man's narration was fine.

Had potential but needs editor

Yeah this is a classic tale of a book that needs a good editor or at least some beta readers. There's so much going on that should not even be in here. It's like the author just threw in every idea she had, didn't edit even herself and said "cool, let's go with that!". From quick mentions of stalkers, kidnapping, abuse, family separations and jail time to a "prince and the pauper" theme - that frankly just doesn't work. The author should have just gone with the main story of a BFF of a starlet whom meets another famous actor and they fall in love. That could have been it and been wonderful but the author decided to throw in a ton of other ideas as well that don't go anywhere or move the story forward. They absolutely make no sense. A good editor or even some good beta readers (not just your family) could have also helped straighten out the mess of ideas.
My advice to any potential reader/listener is that before you buy, read the other reviews and you'll see they all pretty much say the same thing.
To the author, take the advice of the reviewers and rework the story. Cut out all the unnecessary parts , get an editor and rerelease it.

the high pitch woman narrative was hard to listen to. I'll try to get threw at a different time and change my review

Anyone But Him audiobook review

Let me start off by saying the narrators of this audiobook were great! I really enjoyed their readings. Anyone But Him was narrated by Angel Clark -narrating Whitley's Chapters, and Terrence Bayes -narrating Jennings' Chapters. I don't listen to audiobooks often, in fact I've only listen to three I think and they’ve all been of books I’ve previously read, so I wasn’t sure how well this audiobook would go since I hadn’t read the actual book beforehand. There was no reason to worry, it was a great experience.
Whitley, the main character, is stubborn, and independent. She is also a bit whiney which I suppose everyone is so I can’t dog on that too much ;) At the start of the book Whitley is with this terribly self-centered, ignorant guy who she just needs to dump. When you find out that she self-sabotage’s her relationships so she doesn’t have to do the breaking-up herself because she wants to remain guiltless, this is the first sign I got that she has past issues she needed to work through. And whew was I not prepared for the issues she had in her past, I did not see that coming.
Before you find out about her past issues she meets this guy, in probably the coolest, funniest way I have heard/read in a book, totally not cliché at all. It also wasn’t “insta-love” more like “insta-attraction” because boy is he handsome. Jennings Cohen is an unlikely person to run into the way that Whitley does, considering he is a mega-superstar.
I love the path that Cassie Graham takes you on following these two people who are both looking to find themselves, one in scholarly aspects, and the other in their heart. There are a bunch of twists in this novel. I wasn’t expecting a side character that seemed insignificant at the time to be who he was, I wasn’t expecting Jennings to have crazy fans, or Whitley’s past to be what it was. It definitely keeps you on your toes. I found my mouth hanging wide open when some of these twists presented themselves. Even the epilogue surprised me!
I loved listening to this while on my way to class or work, or even while I was writing papers for school. It was a nice, funny, good novel read by great people who knew how to convey emotion and really bring life to the characters they were portraying

What did you love best about Anyone but Him?

the story was moving

sad to say but i loved them all

What about Angel Clark and Terrence Bayes ’s performance did you like?

yes the narrators were on point

The story was interesting at the beginning but then... it became kind of hard to believe, the plot was very unrealistic. Even though I tried to "ignore" the female narrator annoying voices, the male did a pretty decent job.