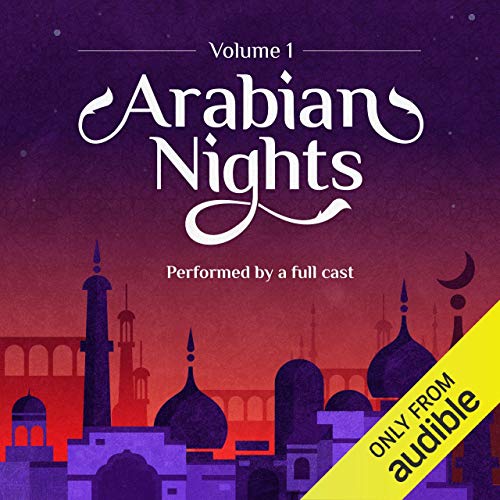 This multicast dramatisation of Arabian Nights: Volume 1 is an Audible Original reenvisioning of three iconic tales - with a twist.

Adapted by the great Marty Ross, whose previous audio dramas include Romeo and Jude, Dark Shadows, Doctor Who and Treasure Island, listeners can expect to hear Scheherazade, Ali Baba & the Forty Thieves and Julnar of the Sea as they've never done before.

Step out of your comfort zone and indulge in the dark and fantastical world we've created. Travel with Mermen across the White City, go in search of treasures in hidden caves with Ali and Kasim and let yourself be guided by Scheherazade’s vision as she gives in to a deadly romance with Sultan Shahriya.

In Scheherezade, a woman finds herself the object of desire of a powerful Sultan with murderous desires. Her only chance at saving her life is by using the one power she herself possesses: her gift for telling enchanting stories, the very stories that follow in this drama....

Ali Baba & the Forty Thieves tells the tale of an impoverished husband and wife whose lives change drastically when husband Ali discovers the cave where a local gang of bandits are hiding their treasure. A happy ending? Not quite, as the money brings dangerous complications in the form of the greed of Ali's brother and sister-in-law and the determination of the bandits not to be stolen from. Can Ali save himself - or will his wife, Marjana, have to do all the work - in this taut romantic thriller?

In Julnar of the Sea, a merwoman finds the love of a mortal King and they produce a son, Prince Badr Basim. Julnar will have to look out for her son, Badr, as, true to his undersea birthright, he seeks out the love of Princess Jawhera of the Merfolk. She is haughty and her father King Es Semendel positively hostile, casting Badr into a dramatic odyssey which will take him to the island of a beautiful sorceress who makes literal pets of her lovers. Can Julnar and her brother, Salim, find and save Badr in time?

Bit too Game of Thrones

While the performances are outstanding, the inclusion of so much sex makes this feel like a GOT take on the Arabian Nights. Once I got to the fourth sex scene, fifth?, in only the first tale (not counting the intro), I decided this was not what I was looking for.

The production quality is superb though.

This is proof that a fine tale can be timeless…I grew up on these in the fifties in South Africa, listening to them in Canada.

The audible production was fascinating and kept me glued to the tale of Sheherezade…loved the sounds…loved the creativity.

A fun adventure through the sands of time

A very fun trip through stories we already knew, or maybe new for some. Still, the voice acting is great and I enjoyed it thouroughly.

Arabian Nights has always been my favourite collection of fairies tales so I'm very glad there's an audio series. I found one particular voice kind of distracting but other than that great performance.

The stories are as I remember them with extra detail added. Great performances and sound-effects!

Not for kids, but excellent

So I thought of listening to this in the car with kids cuz you knkwZzzzz arabian nights. In the first minutes, sex scenes with well voiced moanings; I mean this thing is very sexual and very original in the sense of the original Arabian nights which was not a a kids genre. Well it’s excellent adult fiction and very well acted and the background music.

Better than I had expected, and thoroughly enjoyable.

Like the Sultan, I was completely transported and transfixed by the storytelling in this collection. It was great to see some proper attention paid to some of the less known tales of the Thousand Nights and One Night. Very well performed and good sound quality.

Loved it. The cast and their performances were amazing. I caught myself laughing out loud a few times.

first I was like what the hell is? and after listening to it for like half an hour I loved it! beautifully done!

I ended up listening to the whole thing in just a few days because it was compelling. I know nothing about how close this adaptation is to any of the existing translations or the original manuscripts, but I had a blast regardless!

Trashy and very funny. Adult content, reminds me of a Mel Brooks comedy. If you have the time to laugh, try this book.

Save me from dramatization!

The constant variation of volume was bothersome. I was constantly turning the volume up and down. I prefer books be read.

This was amazing. The adaptor dug into the basic text - a mad king, a clever storyteller, her loyal sister, and teased out the emotions and passion and heartbreak. I was constantly reminded of the storyteller's presence, and her audience - not just in the interjections from her husband, her sister, and an impatient executioner wanting more gory bits, but in the choices of story that Scheherazade makes, the characters she dwells on, how themes of loyalty and sexual desire and family might speak to the king's madness. Even villains and bit characters get a chance to have their say.

The voice-acting is well done - lively, colourful, easy on the ears, really bringing out the character personalities - and the sound effects are vivid. (There were a couple of times when the sound dynamics made it difficult to understand a djinni character, though - I wouldn't try listening to it while driving.)

The bulk of this is two stories, "Ali Baba" and another I'm not familiar with "Julnar of the Sea" (sp?) and does take some liberties with the plot, at least with "Ali Baba". They make for an interesting narrative, so I'm happy about them. There are gory bits, and several women speaking extremely frankly about their sexuality, so be aware of that if you want your children to listen.

All in all this was grand, and I hope the next volume comes out soon.

What a horrible book

For a book which is so highly rated and which came so highly recommended, I'm deeply disappointed.

Ignoring that fact that chapter 1 is pornography, and that the book is rife with violent misogyny, the plot is ok at best and the production quality is very shoddy. In trying to sound middle eastern, the. actual. result. is. to. pace. sylla. bles. alternatelyslowthenpainfullyfast. Nearly every character is almost entirely unlikable. The dialog was usually insufferable and never trusts the reader. It goes to juvenile lengths to show how much of a cartoon each character is. Eg: if it's a killer, he will endlessly refer to himself as such. The barbaric ruthless Shakespearean morality could be seen as a plus if you're into such things, but to me it compounds the previous complaints.

In terms of technical sound, this book is a wreck. The recording volume is equally unbalanced with faint voices, whispering, then yelling. It's not creative dynamic range, it's the equivalent of action movies where you have to jack up the volume to hear dialog then get your ears blown out with the special effect volume. All of this made it difficult to listen to with headphones and nearly impossible in the car. Two of the characters were actually unintelligible about half of the time.

The above issues aside, with few exceptions the use of creative language was genuinely masterful. The effects were also well done. Sadly this was not enough to overcome the aforementioned issues.

this was more like listening to a theatrical play than listening to a book. Why are there sword sound effects and grunting in my book? I could have just turned on a movie in the background if that's what I wanted.

The dramatization of the story brought the story to life and made it a delight to listen to. Very entertaining!

Can't wait for the next one!

Well performed, well written, very well produced. I can't wait for the next one to become available!

I typically don't review, but this audiobook is simply fantastic!

Not only are the stories an all time classic, but the performance is also brilliant.

I highly recommend this to anyone in the mood for something entertaining and fun! It's storytelling for the sake of storytelling and the performance adds another layer of dynamism into it.

Outstanding performances by the cast and such alluring stories...truly an underrated masterpiece.Can't recommend this enough!

I love Arabian Nights, and this is a fantastic dramatization of the classic. The actors and the production are all very well done. It really takes you into the stories beautifully.