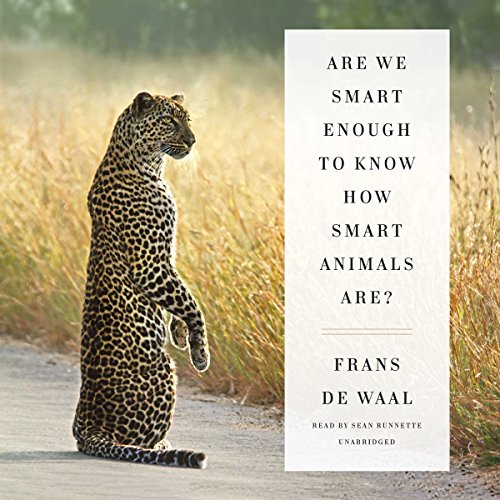 Are We Smart Enough to Know How Smart Animals Are?

From world-renowned biologist and primatologist Frans de Waal comes this groundbreaking work on animal intelligence destined to become a classic.

What separates your mind from an animal's? Maybe you think it's your ability to design tools, your sense of self, or your grasp of past and future - all traits that have helped us define ourselves as the planet's preeminent species. But in recent decades, these claims have been eroded - or even disproved outright - by a revolution in the study of animal cognition. Take the way octopuses use coconut shells as tools; elephants that classify humans by age, gender, and language; or Ayumu, the young male chimpanzee at Kyoto University whose flash memory puts that of humans to shame.

Based on research involving crows, dolphins, parrots, sheep, wasps, bats, whales, and of course chimpanzees and bonobos, Frans de Waal explores both the scope and the depth of animal intelligence. He offers a firsthand account of how science has stood traditional behaviorism on its head by revealing how smart animals really are - and how we've underestimated their abilities for too long. People often assume a cognitive ladder from lower to higher forms, with our own intelligence at the top. But what if it is more like a bush, with cognition taking different, often incomparable forms? Would you presume yourself dumber than a squirrel because you're less adept at recalling the locations of hundreds of buried acorns? Or would you judge your perception of your surroundings as more sophisticated than that of an echolocating bat?

De Waal reviews the rise and fall of the mechanistic view of animals and opens our minds to the idea that animal minds are far more intricate and complex than we have assumed. De Waal's landmark work will convince you to rethink everything you thought you knew about animal - and human - intelligence.

What listeners say about Are We Smart Enough to Know How Smart Animals Are?

animals are incredible and this book proves it. I enjoyed it very much so I am going to read it again

Are humans too stupid

At no point has there been one subject in the book where I’ve felt like anybody wouldn’t be smart enough to understand the behaviour of the animals. Unorganized, book… no real meaning. Obviously quite knowledgeable and experienced with animals writer , but very misleading title. The only place in the book that kind of resembles what the subject is about was at the end conclusion; a simple dumb paragraph about how in the future we’ll be able to analyse in depth the animals behaviours. This book is 1001 animals observations of their daily lives explained by short two minutes reports, nothing more. Very boring, I can’t believe I’ve finished it.

Makes you think about animals and history,
all the science that has been done.

I loved it! The thought process and objectivity

I hunger to explore taboo topics! This was definately satiating that need. I hope there are other books out there. 😊Thank you!

Good read of a complex topic

Good read of a complex topic without unnecessary terminology and with interesting examples and discussions of alternative approaches.

I thoroughly enjoyed this book. The narration was clear and easy to understand. It's important that we move away from a human-centric way of judging our fellow earthlings and this book has some great arguments for empathy - a way of being that is so necessary in the world today.

Pulling Back the Veil

Even among conservationists like myself, there is a widespread failure to fully appreciate the intelligence, sentience and emotional lives of animals. This ignorance can be comforting at times, putting distance between ourselves and the other minds we are so readily destroying. Reading this book brought the defining moral crisis of our age into sharp focus, and while at times it was difficult to see ourselves through this lens, author Frans de Waal has empowered us to lift the veil. I now live in a much more interesting world, where the wildlife I admire have mountains more depth. #Audible1

Enlightening but not earth-shattering

This book tells us that animals have cognition. When you interact with your pet dog, it isn’t just an automaton responding reflexively to Pavlovian stimuli, it actually has awareness. It thinks. It has cognition.

Were you ever in any doubt about this? I wasn’t. It’s the most obvious fact in the world that pets have consciousness and awareness. They have ‘minds’ just like we do (if there is such a thing!). This book argues this fact as if an army of behaviourist scientists are disputing it, which I suppose they must be, but to me it’s pretty obvious and so the basic message of this book isn’t an astounding life-changer.

But the book does add a lot of breadth and depth to this basic premise. For one thing, it challenges the notion that human cognition is essentially different (and superior) to all other animal cognition. He provides lots of examples of primate cognition which are very hard to separate from the way we think, such as planning for the future and understanding the motivations of other members of a social group. He makes the case that animal cognition has been underestimated by behaviourists because they tend to study animals in laboratories. Laboratories are unnatural environments which do not bring the best out of animals. They are much better studied in their natural environments. Many imaginative experiments have been performed in natural environments proving that animals function at a high cognitive level.

And this extends beyond primates to other animals: Elephants, dolphins (who know each other by name), birds and invertebrates, such as the octopus. They’re all shown in this book to be much cleverer than they’ve previously been given credit for, and it is hard to deny that they have consciousness.

It’s an entertaining book that probably won’t change your World View too much (unless you’re a behaviourist), and the take-home message is ‘animals are smarter than you think’.

I listened to 8 of 12 chapters hoping it would turn around, but then I couldn't take it any longer. I was looking forward to a fascinating narrative of the observed intelligence of a variety of animals, but this was mostly a dry rambling dissertation/critique of other ethologists and psychologists with occasional descriptions of experiments demonstrating intelligence or our failure to design such experiments properly. If you want to hear 10 hours of 'cognition' pronounced three times a minute, then this text is for you. I am usually not bothered by narrators quirks, but this one's ill fitting denture only added to the annoying narrative.

Finally the science catches up

This book gives a variety of examples where science has shown different examples of animals acting smart, being self-aware, and in ways we can relate to them.

I like the authors proposition that we should not discount the ability of all of life to exhibit intelligence, most of which is related to their requirements to survive.

As far as consciousness, or being self aware, these are general terms and pretty much subjective even within our species. The author explains this very well, a book well worth the time.

Once again Mr. Frans de Waal is opening eyes to the intelligence, character and political nature of animals, including us humans. In spite of our human egos and pre conceptions. The natural world is full of intelligent acts. From chimpanzee politics and social planning to killer whales hunting seals by isolating them. And, the incredible octopus, turning the tables on sharks.
I highly recommend this listen!! It opened my eyes to human short comings when it comes to the question of what intelligence really is!!!
Plus Mr. Sean Runette's narration! As always, is perfect for this type of material!!! He is quite possibly then most versatile narrator out there!!!👍🏽👍🏽👍🏽👍🏽👍🏽

Can't get over the lisp on the reader.

I think I would have loved the book, but I can't get over the speech impediment of the reader. Found that I was anticipating the next "s" in the sentence and cringing every time. Stopped listening after two chapters.

The entire book was interesting and captivating. It answered many questions I had about how animals think and understand. I still have many questions that were left unanswered, yet that may not be in the scope of the book.

I wish the book was twice as long.

For a person without technical knowledge of animal behavior, this book stretched me to see the intelligence and cognition of animals in new ways. I now have a much greater appreciation of my dogs mental capacity, his emotional life and depth of attachment.

Great arguments for intelligence of animals, when judge from animal perspective. Loads of examples and stories. Nothing really new, except for perspectives sake. Humans think animals should be rated from a human point of view. Wrong! Narrator is one of my favorites! Very warm and easy on ears.

MOre to know about the other

What did you love best about Are We Smart Enough to Know How Smart Animals Are??

I love the information about animals, animal research and the connection to man

The reader had a passion for the book also.

oh, never, the books i enjoy are best absorbed in many sittings, much to much to think about and delightful.

a grand bit of knowledge.

Fun and educational. An excellent listen. Highly recommend to animal lovers and those fascinated by science.