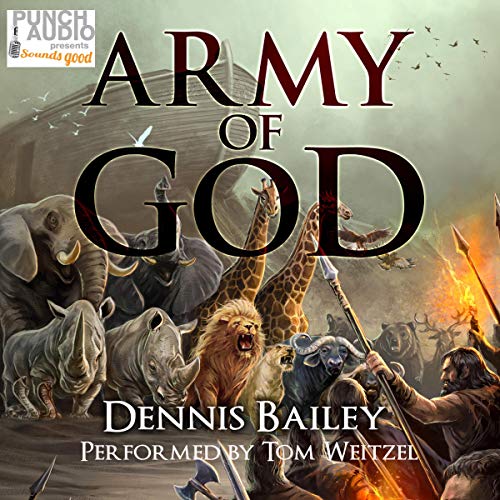 One of the most beloved and enduring stories of all time...One of the most recognizable characters in history...A plot by a rival to kill Noah and his family is thwarted by a beautiful young woman, who joins them as they flee the ancient Biblical city of Eden. A year later, the Lord reveals His plan to destroy the Earth by flood and commands Noah to build an ark. Only the news is met with skepticism and opposition from members of his own family. Eventually, word of the ark reaches Eden, prompting the rival to send an army of 5,000 men to destroy it.

However, Noah has an army of his own.

Action, adventure, and suspense combine with the Biblical account of Noah's Ark to create a heart-pounding pause-resister that will stay with you long after the flood waters have receded.

What listeners say about Army of God

The Best Coincidence Ever!

While reviewing an audiobook series the author wrote me, asking for an apology for being late with the last one because he was on vacation.
His eMail included pictures and a small story of how his wife and him enjoyed it all plus he mentioned the book that he took with him on that vacation very much recommending it and yes you guessed it the books name was Army of God.
Now I’ve reviewed three different series’s by that author each was at least four 10 hours audiobooks long which where all 5 stars so if he recommended a book to me it got my attention and I had to get it no question asked.
All I can say is that I’m so glad that I didn’t asked and got Army of God, 12 hours without a break I just couldn’t put it down, I was in love with this book and it’s impossible to explain why !
I’m really having a problem explaining why this is such an awesome book, it’s like taking a part of the Bible and creating a masterpiece action book out of it.
Only Dennis Bailey the author was genius enough to think and fallow on an idea like that.
Not to mention that he was smart or lucky enough to get Tom Weitzel to narrate this awesome book.
Amazing time three!!!
I fell in love with this one on page one word one till the last page, last word typed.

Absolutely full heartedly recommended to all and I absolutely mean that, it’s guaranteed !

What a beautiful story of Noah and the flood.

While I am not a fan of the bible I do know the stories. Noah is quite popular in various religions. I enjoyed Mr. Bailey's redition of the flood. How one man's hate followed him his entire lifetime. How people today instead of looking at their own mistakes want to quickly blame others. It wasn't Noah fault the Angel guarded the garden. He merely warned the group of men not to proceed with their plans, and their arrogance got them slaughtered not Noah.

Great story that held my interest from beginning to end.

Bailey uses the skeleton of Noah’s story to frame his book. Besides that it’s author’s liberty in imagining happenings and challenges Noah and his family faced. If you approach the book as an imaginative narrative not biblical historical fiction it will go better for you. The writing is a bit choppy but the character development offset that issue.

Wonderful story with fun around the corner! The characters were believable and be the voices are easy to listen to and add depth to the characters!!

Not worth the read

I did not like this book at all. The story, I felt, was a total work of fiction based on the authors need for gore and violence. I tried to hang in there waiting for anything of value. I finally gave up. I just couldn’t take it anymore. The narrator was beyond annoying. This is not a book that I can recommend at all.