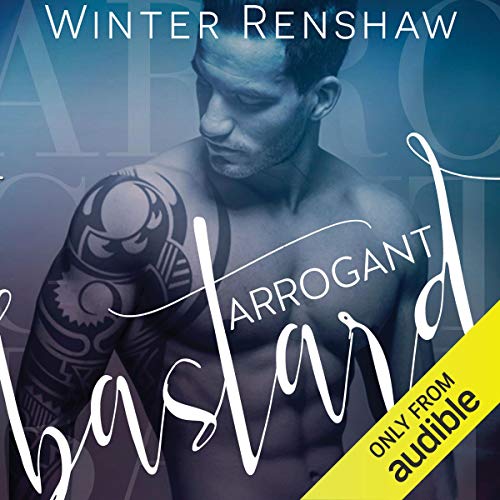 The last time my father beat me to a bloody pulp was the night he walked in on me with his woman in his bed.

To be fair, she seduced me. And to be honest, I liked it. But to CPS, I was a victim. They shipped me to Utah, where my estranged mother lived with her husband and two sister-wives. And that's when I met her. My innocent, wholesome, perfect step-sister. Well, one of many. But Waverly stood out because just like me, we'd been fighting a losing battle our entire lives. Falling for her was a mistake, but shit, it's not like I ever made good decisions. F--k being "family". I must have Waverly Miller, and I won't stop until she's mine.

AUTHOR'S NOTE: This is a full-length, standalone, HEA romance. Contains forbidden themes, as well as religious undertones not meant to offend. Please be 18+.

What listeners say about Arrogant Bastard

I think this story was too young for me. I couldn't wrap my head around the polygamy or the way these women thought that husbands were given to them to show them the proper way... YUCK! I'm glad it ended the way it did but It just wasn't for me. The writing was good and so was the narration, it was just the subject that I didn't enjoy. I like this author very much which is why I picked up this entire series.

This cover was very deceiving to me! I don't usually read the synopsis because it always gives away to much info on the book so I buy books based on recommendation by friends, authors I know I like, covers and titles and it has yet to disappoint until this book. Nothing about this cover says high school to me and the name fits the cover better than the story.

Arrogant Bastard--
Standalone start of an Interrelated Series. The story continues, but it can stand alone because the next is about another couple.
3.5 Stars

I need to start by saying I stupidly didn’t even read the blurb before jumping into Arrogant Bastard . Winter Renshaw is constantly a big seller on my blog, and when I saw it was two new narrators to me and 99¢ with a $1.99 audible upgrade, I jumped to grab this book. The cover, title, star rating, and price plus the popularity grabbed me. So I had no clue what to expect. I didn’t even know it was a NA book leaning to YA with lots of sex. The characters are seniors in high school.

The writing is pretty good, but the storyline was just a hodgepodge of lots of different themes, none of them fully fleshed out. Jensen, the main character, was thrown out of his father’s house after he slept with his stepmom, and he was shipped to live with his estranged mom and two half-siblings in an AUB polygamist group home. His mother is one of three sister wives, and the three families and kids are all being raised as one family.

Waverly is the same age as Jensen, and is one of the other wife’s daughter, so they go to school together. Jensen is the big tattooed bad boy of course, but Waverly is a completely subservient, submissive young lady who has basically never been allowed to do anything but serve her father, do chores and do school things. She plans to go away to school, but her father doesn’t quite believe that women need to go at all, they should just become the 6th wife to some old fart. Waverley’s whole life is about school and being exactly what her father wants her to be so he hopefully will let her go away to college.

“I can’t take my dish to the sink?” His dark brows arch. His shower-fresh scent invades the close space between us. “My legs aren’t broken.”
“Yeah, but,” I start to say, “in this house, the men don’t work in the kitchen.”

Basically Waverly is prim, proper and judgmental. And she truly believes that are like a big family and that they are mostly normal. She seems to believe that women are helpless and inferior.

But when she gets around Jensen, she starts to feel things. Even though they aren’t really step siblings, they are raised as them. It doesn’t stop her feelings though.

"I have no idea what just happened in there. All I know is I met Jensen Mackey today, and my world tilted on its axis."

So the good girl started having some impure thoughts, and she knew she had to stop. But Jensen loved to goad her.

"He’s my brother now, and that will never change. Our parents are eternally sealed to one another."

And when she accidentally sees him naked, the good girl becomes a little less good.

Arrogant Bastard definitely read as anti-AUB (similar to Mormon?), but if it’s all accurate, I learned a lot. I liked how Jensen upset the status quo and tried to show her that there are other ways, and he teaches her to be a "bad girl".

Then it basically becomes two “step siblings” trying to have sex as much as possible in a big household with very strict rules.

•Completely unique storyline.
•If the info about the AUB is all accurate, it is very interesting to learn how they live.
•Compelling read because it is unique.
•Good sexual banter.
•Good lead-in to the next book.
•The female narrator did a young girl (and even a young man) very well.
•The male narrator was great for a young man too.

•The characters were too young for my tastes (but I should have known that going in).
•The title and cover don’t fit the book in any way. He was so not an arrogant bastard, even if he came off like that at first.
•This was kind of a stepbrother/save a girl from a cult storyline, but it didn’t quite delve into any one aspect enough. There was just a few too many themes happening.
•The change from good girl to rebel was ridiculously fast, but maybe as a teen that isn't so unrealistic.
•The ending wrapped up quickly with not enough explanation, though I think you'll get more in the next book.

The Down & Dirty:
Arrogant Bastard was a step-sibling book, but it was also about the AUB polygamist religion. I felt like it was too many taboo storylines combined and nothing was quite fleshed out well enough, but knowing that people really live like that is pretty interesting. I wish I knew how accurate it was. Despite the excellent narration, I was kind of just left feeling like "that was different". I didn't dislike it at all, in fact, it kept me interested. But I didn't love it. I would however, read this author again if I read the blurb and some reviews more and know what to expect.

All three books r great! But this one is my 2nd fav. Such a good read

Arrogant Bastard is a great story by Winter Renshaw. Jansen was the son of an abusive preacher who beat him really bad and went to go live with his mother until he turned 18. There he meets Waverly ishe s very family orientated due to her fathers involvement with the AUB. The back and forth banter between them is entertaining. I can't wait to find out more about Bellamys story.

Choices of the heart

This was a fantastic book I really enjoyed it. The story is based on a family of people who believe in polygamy it tells the story of a young girl and her struggle with religion and her heart. It is such a touching story You will love it