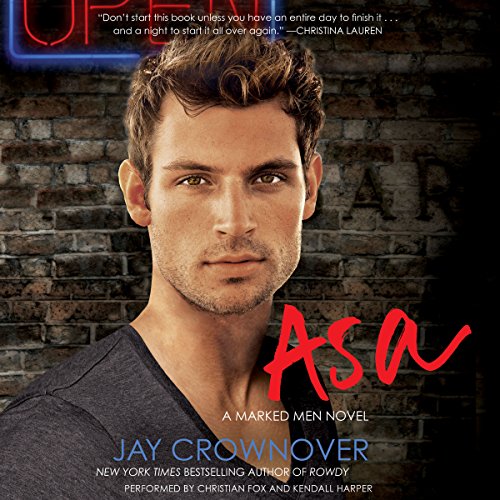 Starting over in Denver with a whole new circle of friends and family, Asa Cross struggles with being the man he knows everyone wants him to be and the man he knows he really is. A leopard doesn't change its spots, and Asa has always been a predator. He doesn't want to hurt those who love and rely on him, especially one luscious arresting cop who suddenly seems to be interested in him for far more than his penchant for breaking the law. But letting go of old habits is hard, and it's easy to hit bottom when it's the place you know best.

Royal Hastings is quickly learning what the bottom looks like after a tragic situation at work threatens not only her career but her partner's life. As a woman who has only ever had a few real friends, she's trying to muddle through her confusion and devastation all alone. Except she can't stop thinking about the sexy Southern bartender she locked up. Crushing on Asa is the last thing she needs, but his allure is too strong to resist. His long criminal record can only hurt her already shaky career, and chasing after a guy who has no respect for the law or himself can only end in heartbreak.

A longtime criminal and a cop together just seems so wrong...but for Asa and Royal, being wrong together is the only right choice to make.

What listeners say about Asa

This is the last book in the Marked Men series and it was a satisfying ending. This series isn't high brow literature, but they're fun reads and the narration is better than average. This particular story line didn't interest me as much as some of the previous books (Rule, Rome, Rowdy and Nash) and the names started to get just a little bit ridiculous. Still, it was an enjoyable few hours and worth a listen if you've read the rest of the series.

Great ending to a great series!

What did you love best about Asa?

His ability to finally forgive himself!

Which character – as performed by Christian Fox and Harper Kendall – was your favorite?

Who was the most memorable character of Asa and why?

Asa.. He is beautiful inside and out

Christian Fox is a PERFECT Asa!!! Loved the book and the narration it's very rare I love both but this combo was one of the best I have ever listened to. Absolutely Flawless.

Loved this final installment to the series. Both characters were interesting and so filled with love. This book had the perfect amount of angst and drama but fun too.

Jay your work is stunning and beautiful. Thank you for that awesome story and we thank you for sharing it with us, your readers. Cheers. Great read.

Great addition to the series. My only complaint is I wish there was a little more of the group present.

Why is this the last book in this series?????

We need at least two more novels out of this series! On for Dixie and one for Rowdy's sister! Not in that order by the way.

I love all the Marked Men books and this last one was just as good as all the others. Great narration and great characters. I love Jay Crownover's writing. I have listen to all the books in the series and have not been disappointed once. Can't wait for the Saints of Denver series!!!!!

Same as the others

Loved the guys voice though i expected a heavier accent since Asa is supposed to be from the south. It was a pretty good story but lacked enough drama for it to be believable I think. Still a good continuation of the marked men though. Royal seemed like the complete package and a bit too perfect too soon but what do I know. Overall the voices matched the book and i enjoyed it :)

A Standing Ovation to Jay Crownover...

What made the experience of listening to Asa the most enjoyable?

I really enjoyed this one and had been looking forward to it for a long time. It was the perfect ending to the series and loved hearing about the rest of the cast so much that I'm itching to go back and listen to the other five books again...

This entire series is full of characters that I just love, and I'm sad it's over.

Which character – as performed by Christian Fox and Harper Kendall – was your favorite?

They did an excellent job. I was already a fan of Christian's work and can now say that Harper has been added to my list of good female narrator's list. Excellent job!

I laughed and got all kinds of emotional. I loved it.