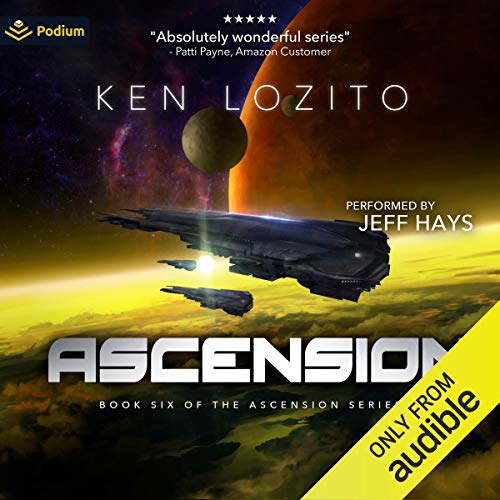 Written by: Ken Lozito
Narrated by: Jeff Hays
Try for $0.00

When the Confederation gathers a grand armada ostensibly to liberate Earth from the Boxans, the crew of the Athena must stop them before it’s too late.

Some species believe they can avoid war and endure the oppression of the Confederation while others choose to resist. The Athena and her crew struggle to keep the Star Alliance from splintering apart by offering them something unthinkable.

Ascension is the final book in the Ascension series, an action-packed space opera saga that spans worlds. A journey that began when the brave crew of the Athena left Earth to investigate an alien structure discovered in the furthest reaches of the solar system will now come to an end.

What listeners say about Ascension

I've listened to 1-6 now and really enjoyed each one very much! Thank you!! WOW!

The end of a great series

Loved this book and the complete series, fully recommended. The characters are well defined and the story captures my imagination. I have a hope that Ken will take up the story about how Zack and Kaylan plus Athena adventure continue.

KL knocked this one out. great job. entertaining. very little cringe and believable scifi. narration was nice too.

It doesn’t happen all that often and you kindred fans of space opera/fantasy know this it is unusual to read a series we’re not only can you not wait to get back to the story but every installment is a great story. Thank you Mr Lozito and Mr Hayes for a awesome series story characters and narration.

Worth every single second

I find that this story is compelling and thought provoking. Well done Jeff Hayes, oohrah.

Fantastic series from Ken Lozito! I really wish it went on for many more books! Science fiction at it's finest.

Great series to read/listen to.

The series really makes you invest in all the characters and follow everyone's individual story closely.

I hope this is not the end, great series. thank you very much for the great work

I loved the ending, but I'm still sad to find the story, and the characters' journeys, at an end. I completely recommend this series.