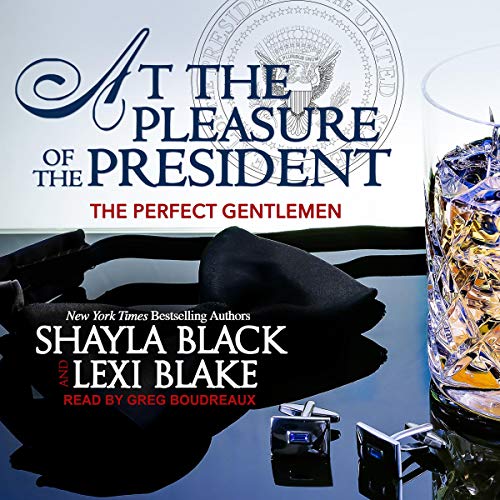 At the Pleasure of the President

Decades ago, ambitious Zack Hayes set his sights on the White House. He's worked his whole life to become the leader of the free world - attending the right schools, marrying the perfect bride - all to aid his campaign. He didn't realize someone behind the scenes has been pulling the strings to manipulate Zack and the country he loves into a dangerous position - one he will risk his life to wrench free from. The one thing he can't risk is Elizabeth Matthews.

From the moment she met Zack Hayes, Liz felt the connection. Serving as his campaign manager and then his press secretary, she accepted that her love for him would remain unrequited. Still, she'd thought they were friends, so when he pushed her aside, she felt the stab in her heart. And when she realizes he's done it to protect her, nothing will stop Liz from standing by his side - not even the men who would use her as a weapon against him.

As shocking secrets are revealed, Zack and Liz find succor and passion in each other's arms. When the ultimate villain shows his face, Zack may have to choose between his country and the woman he loves....

What listeners say about At the Pleasure of the President

It was fascinating all the twist and turns. The love stories going on and how the women in there lives brought them all together as a family for the PERGECT GENTELMEN . I LOVED EVERY moment of the story and the ending.

Finding, and keeping, your family

Loved that we got a two-‘fer in this book! As one couple starts out, and makes horrible mistakes, well, he does, along the way, another that was ripped apart has to figure out how/if they can work things out. For every high one couple has, the other has a low. This had me in tears one moment, and laughing the next. A huge, and I mean huge, mystery is unraveled string by string, until the entire thing collapses in the floor as a mess in the last chapter. Even then, the myriad of pieces need to pulled out one by one to sort everything out

At the heart of it all, the real story, are the friends you make, and their loyalty. The partners you choose, and their love. The fragility of human life, and the tenuous bonds that tie us together. The love you can’t control, and those you can’t live without. That, where once you had nothing, you now have a full, vibrant, life, surrounded by people you love, and who love you back just as much!

If I was stuck on an island I would take with me the gentleman series. At the pleasure of the president is epic. Thank you very much and I wouldn’t mind seeing these series made into a movie.

Great conclusion to the series

Greg Boudreaux did a fabulous job narrating this book.using a variety of voices he brought this story to life for me.
Although this can be read as a stand-alone, I would recommend you read the first four books. It will give you a better understanding and background to what is happening as there is a continuing story line throughout the books.
This is a hard review to write as I do not want to give away any spoilers. I love an alpha male, add in a feisty heroine and I am there. The action is fast paced, I was on the edge of my seat and I read this book in almost one read. I just didn’t want to put it down; I had to know what happened! The suspense, drama, plot twists and turns had me totally enthralled and I found myself reading well in to the early hours of the morning.
This is President Zack Hayes and Elizabeth (Liz) Matthews story and it was captivating to say the least. All of the Perfect Gentleman and their women come together to support Zack as they fight an enemy that is not only trying to destroy Zack but the very foundation of their country.
The chemistry between Zack and Liz is electrifying and intense. Danger lurks around every corner as Zack and his fellow members of the Perfect Gentlemen Club continue their investigations till it reaches it’s explosive conclusion. Will Zack be able to make a choice between the woman he loves and the country that is his heart and soul?
The continuity between the authors was seamless. I have no idea who wrote which part and honestly, it doesn’t matter; it was brilliant from start to finish. Superbly written, an outstanding read. Superbly written, an outstanding read.
A fitting conclusion to one of my favourite romantic suspense series EVER.

Stunning conclusion to an epic series!!

Ironic how much this book captures some of the things going on in the world today.... however, it ties all the books together and wraps up the series in a true Shayla Black/Lexi Blake fashion....in a word it was outstanding. Narration was wonderful and the flow of all the characters was great. my only hope is that this will spin off into a new series... fingers crossed!!!

I am SO sad this series is Over!!! I LOVE THEM!

EVERYTHING and I do mean EVERYTHING about this series had me captured. I loved the narrator on this one as well as the others but this one pretty much sums up the entire series and the ending of a true scandal. I love the bond between the Perfect Gentleman and the love and protection they showed each other and the women in their lives. I laughed so much at Madd (my favorite character)!! I listened to this on AS SOON as it came out because I wanted to know what happened to MADD... Just hope to see more with their children! That will be a whoot!!

This book is excellently narrated, giving the characters voices and emotion. The story is fantastic. Although it can be read as a stand alone, I believe it more meaningful if the rest of the series is read first. It’s a fast moving story of espionage, international politics intertwined with relationships. The characters are diverse and very well formed. I truly recommend this book for those who like a spicy exciting read.

🌻well, this was a real let down🌻

I was so excited when I noticed that this book was out. I had loved the series, thus far, and was anxious for Zach to find his happy.

Right from the beginning I noticed that this book didn’t have the same intensity, as the others, in this series. Zach’s story has been fed to us, in small bites, in the other Perfect Gentlemen’s books. There has always been this mystery surrounding the death of Zach’s first wife and his childhood nanny. Then Maddox’s plane crashed under mysterious circumstances and I was on the edge of my seat, in anticipation. However, the book started out slow and instead of the PG unraveling the mystery, the authors decided to have these spies and Zach’s Dad decide to spill their guts. Really? This conspiracy has been kept secret for 40 years and, all of the sudden, these bad guys get a conscious? It’s really too bad that these gals ruined what had been a really well written series, by getting lazy with the last book.😭

I thoroughly enjoyed this series. So much so that I'm sad to see it end. There were a few things I guessed from the other books in the series and I was looking forward to finding out if I guessed right. I hope Shayla and Lexie come up with another action packed series like this. Here's a thought, what happens with the next generation? Hmmmm (smile).

Some of the most ridiculous dialogue I have ever read. If you over 13 years of age, the prose should be insulting. Almost no real plot. Save your money.

What a perfect ending..

Elizabeth and Zack have been in love with each for years and just when they can finally start exploring their feelings and relationship, conspiracy, murder, espionage, and suspense plague their happiness. In order to move on, they will have to overcome betrayal, deceit, and pray for forgiveness and a lot of luck.

I loved this book..maybe not loved, but really, really liked😄. Since I had the series on audio, I had to wait for the audio book to finally finish to see how they were able to squash the Russian interference. While some parts lagged a bit (constant conspiracy talk) I loved the suspense and “whodunit” vibe..although it was easy to figure out some parts (easy enough that it made Roman and Zack seem stupid for not considering it) it was still enjoyable and exciting watching it all come together. (As a side note, Liz should have given Roman more of a tongue lashing.)

Zack and Liz played the best “soon to be” first couple of the US beautifully..I enjoyed her sass and southern twang and Zack was so vulnerable about her and his feelings. He has such a responsibility and she was the best partner for him.

I wish we got to see Freddy more or even if he ever found a woman of his own. His quirky and weirdly cautious and paranoid personality along with Madd ‘s “devil may care” attitude gave us some funny levity to an otherwise tense situations.

Overall it was a great book and an awesome series. I love the relationship between the fellas and then their women. It’s a connection anyone would dream of having with a selector group of folks.

Shayla and Lexi put together a great tale that weaved a conspiracy that was complex and deadly, but The Perfect Gentleman always stick by each other’s side...and it seems so do their kids.

The best series ever!! ❤️
I couldn’t stop listening and downloaded each one after the first book!!