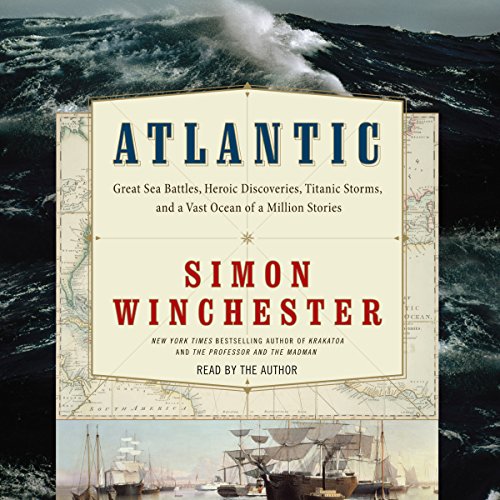 Tackling a subject as deep  and I mean that literally  as the ocean is not a task for just any writer. But Simon Winchester, a former reporter who has put his research skills to use on books about the 1906 San Francisco earthquake and the writing of the Oxford English Dictionary, ably turns out a detailed and dramatic history of one of our most valuable resources. He also provides the book’s narration, with an expert’s reading that brings plenty of passion to an otherwise dry subject.

Winchester structures the book around Shakespeare’s famous passage about the seven stages of man  the one that starts out, “All the world’s a stage” and traces life from its “infant beginnings” to its “sans everything” end. Here, the seven stages belong to the ocean, starting with its geological development and ending with a look at just how long it may last. In between, Winchester draws together countless stories, anecdotes, trivia, and facts, showing just how influential the Atlantic has been on life as we know it: Piracy, Moroccan snails, naval development, the age of exploration, whaling, poetry, literature, art, music, the Lusitania, global warming, international laws, pollution, submarines, seafood, overfishing, the slave trade, Lord Nelson, NATO, air travel, the Titanic, deadly battles, hurricanes, and Columbus all get their spot in, as Winchester says, “the immense complexity of an ocean that has been pivotal to the human story”.

Though it’s not always purely chronological, the organization by theme makes wading through this epic biography easy, and Winchester’s authoritative British accent lends a pleasant tone. And once you’ve heard about all the misconceptions people used to have about the ocean  like that heavier objects would sink not just faster but farther toward the bottom than lighter ones, which would stay suspended at shallower depths  you’ll wonder just how much more we have to learn. Blythe Copeland

From best-selling author Simon Winchester comes the immense and thrilling story of the world's most mysterious and breathtaking natural wonder: the Atlantic Ocean.

Atlantic is a biography of a tremendous space that has been central to the ambitions of explorers, scientists, and warriors, and continues to affect profoundly our character, attitudes, and dreams. Spanning the ocean's story, from its geological origins to the age of exploration, from World War II battles to today's struggles with pollution and over-fishing, Winchester's narrative is epic, intimate, and awe inspiring.

Until a thousand years ago, few humans ventured into the Atlantic or imagined traversing its vast infinity. But once the first daring mariners successfully navigated to its far shores - whether they were Vikings, the Irish, the Basques, John Cabot, or Christopher Columbus in the north, or the Portuguese and the Spanish in the south - the Atlantic swiftly evolved in the world's growing consciousness of itself as an enclosed body of water. Soon it became the fulcrum of Western civilization. More than a mere history, Atlantic is an unforgettable journey of unprecedented scope by one of the most gifted writers in the English language.

What listeners say about Atlantic

Another winner from Simon

I love Simon Winchester books. They are not for everyone though. If you are interested in trivia like what lured the Phoenicians out of the Mediterranean Sea into the Atlantic Ocean (mollusks that give off royal purple dye) and like the concept that the Atlantic Ocean has a history that is unbelievably interesting, this book is for you. Plus, I love Simon Winchester's reading.

Simon Winchester does a fabulous job of narrating his own book. His accent is delightful and he puts emphasis in all the right places. I will never look at the Atlantic Ocean the same. It was a great listen very informative, as is all of his work

The mark of a great historical book is that there is no chance the dimwits in Hollywood will make a movie out of it. This book fits that bill, in a good way. Broad and in depth, the author covers the subject in an original way. As he does so well, in his other books, he makes the approach personal. From his own prospective, the author brings to life the myriad of characters within the story of this seemly inanimate geological feature. His narration is easy to listen to while being interesting and, dare I say, compelling.

Starts Better Than it Finishes

The first half or so of the book is fantastic. I immediately put several of Winchester's books on my wish list. Unfortunately the book slides into a global warming boiler plate and never regains its initial grace. Regardless of one's view on climate change - and I agree that it is changing - this just isn't how the book was billed. So I wound up with a sack of oranges when I thought I was buying apples. Climate change activists that pick up the book because of a good review based on the book's climate credentials will be disappointed overall (though they will be happy that someone of Winchester's stature is championing the cause) and the reader just looking for a good historical story will be put off by the surreptitious nature of its activist message.

a whale of a book

Atlantic is well researched, interesting and superbly narrated. Between the so very interesting details Winchester weaves together, ranging from geology to geography to science to the personalities, the story is captivating. Winchester's vibrancy of language, coupled with his wonderful voice, make this a most entertaining and very informative audiobook.

loved this book. Winchester both writes and narrates with both great sweep of historical perspective and fascinating detail

A very enjoyable several hours! Be prepared for solid history, science and riveting tales of the sea.

Simon Winchester turns every accounting of history, science or social observation into well-crafted and captivating stories. No less happens in this book about the Atlantic ocean: its geologic and historic collisions with mankind are a fascinating read.

Stick it out for the second half

I almost didn't finish this book, which is a rarity for me. The intro alone was 1 1/2 hrs long and the entire first part of the book seemed to be a snobbish name-dropping list of Atlantic coast towns and cities and his seeming assumption that everyone who reads his book is well traveled and has been to the same places. To have any idea of what the author is talking about you need to have, at the very least, an atlas beside you as you listen. He jumps from one place to another often quickly and doesn't say much of anything pertaining to the purpose of the book. However, the book redeems itself in the second half and turned out to be quite worth wading through to get there living up to it's advertising.
The author himself is a fine reader.

Has Atlantic turned you off from other books in this genre?

Which character – as performed by Simon Winchester – was your favorite?

Could you see Atlantic being made into a movie or a TV series? Who should the stars be?

Lovely way to enjoy one of his books

His voice makes the book even better than it would have been. The personification of the ocean, his storytelling (whether historical or personal) is captivating, and it is such a dense book without feeling burdensome.