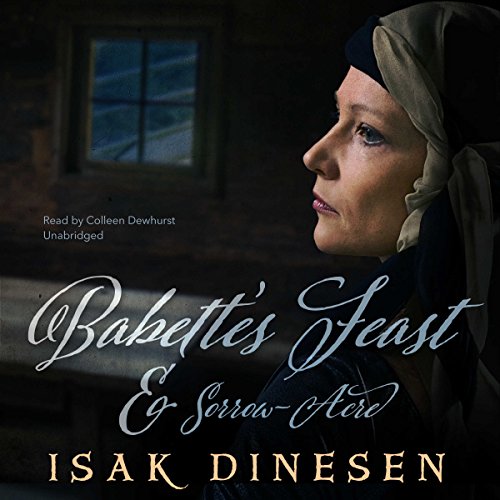 Written by: Isak Dinesen
Narrated by: Colleen Dewhurst
Try for $0.00

"Through all the world there goes one long cry from the heart of the artist: give me leave to do my utmost." This line from "Babette's Feast" lends itself to both of the stories in this audio collection, which tell of unbreakable human spirit and total commitment to life choices. "Babette's Feast," now an award-winning film, takes a humorous look at a pure-spirited community in which love, lost youth, self-denial, and creative urges contribute to making the right choices. And "Sorrow-Acre," the most anthologized of Isak Dinesen's stories, challenges the most profound choice of all. Emmy and Tony Award-winning actress Colleen Dewhurst's warm, sensitive interpretation reveals the subtle beauty of Dinesen's prose.
(P)1987 by The Audio Partners Inc.
Anthologies & Short Stories
Show more Show less

What listeners say about Babette's Feast and Sorrow-Acre

I just LOVE these stories, and think Collen Dewhurst did a magnificent job reading them. Couldn't go to bed because I couldn't stop listening.

Two wonderful folk-tale-like stories from the pen of an incredibly talented author. These two stories are superb.

The audio, however, is of extremely poor quality. It isn't anywhere near to the quality of most books sold by Audible. It's a shame as the stories themselves are beautiful.

Two short stories - just over an hour each.

Babette was not as good as the movie. Sorrow-Acre was too depressing for me. But both are thought provoking.

I saw the movie many years ago and liked it. It stayed in my mind. I hoped the book would be better, but it was not.

CAUTION SPOILER:
Two pious religious sisters have lived their lives helping others, eating simple food, denying themselves love and enjoyments in life. Babette’s husband and boys were killed. She flees to Norway where she cooks and works for the sisters for no money, for many years. When Babette wins the lottery, she uses all that money to create one meal for the sisters and their friends - expensive wines, a live turtle for soup, etc. The sisters do not want to show that they enjoy food, but the meal is so great that it brings out things in people. The sisters did not know until after the meal that Babette was one of the great chefs of France. This was about the artist’s need to create. She spent her entire lottery winnings on one creation.

I did not see as many reactions and changes in people in the book as I did in the movie.

SORROW-ACRE:
It was too depressing, but it was thought provoking.

CAUTION SPOILER:
Set in the 1800s or earlier when peasants worked the fields for a lord (local ruler or land owner) in Denmark. A boy is accused of burning a building and will be sent to jail or something. His mother begs for mercy. The lord says if the mother can cut all the rye in a field in one day, then the boy will be set free. This is the work for three men. The mother does it but dies within minutes of cutting the last stalk. The boy cries as he hugs his mother. The lord sets the boy free. The idea is that the lord gave the mother tremendous power to save a life. It is rare for people to be given that much power. I hated the lord for doing it. He had that much power, and he used it to kill.

This was an amazing reading of a timeless classic!! I was skeptical of Colleen Dewhurst doing the reading, as I associate her so much with Anne of Green Gables - but, because of the other great reviews, I gave her a chance and am so glad I did! There is something about hearing her read these beautiful words that made it really come to life. No regrets here! I loved it!

Annual listening to this audio gem

Colleen Dewhurst reads Dinesen as no other, steadily, reverently, vibrantly, and for this I listen to her reading of Babette’s Feast every December.

Excellent book.. surprisingly interesting and a delightful spirit filled ending! Please read this book .. it will lift your spirits!

Both stories excellent and beautifully performed.
Same author as Out of Africa story
Touching stories
Recommend it to all. Yes

I read this story many years ago, so the events depicted were not new to me. The narrator brings great gentleness and beauty to the writing, though. I loved it.

Both stories touch something deep in the human spirit. Another reviewer thought that the performance was less than satisfactory. Colleen Dewhurst’s slightly gravely voice, in my opinion, fits the pathos of the stories perfectly.

Wonderful book and perfectly narrated. A classic that is so worth revisiting. Very glad to find it.