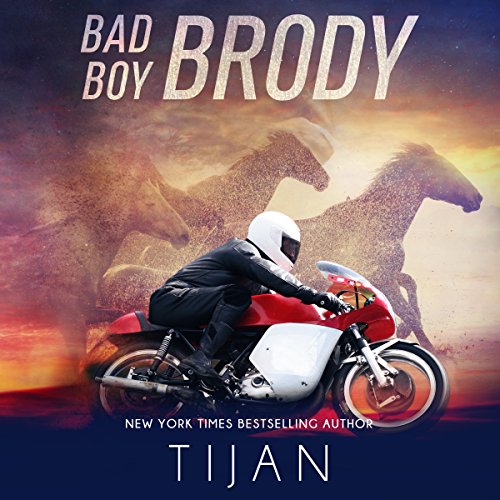 Written by: Tijan
Narrated by: Sebastian York,Brooke Bloomingdale
Try for $0.00

One punch took him from Hollywood’s Golden Boy to Bad Boy Brody. The media didn’t care he was grieving his brother’s death. They descended on him, but to change his reputation, his manager got him a deal.

Act in an indie film, one that already had Oscar buzz, and he’d get the movie roles he needed to secure his future. He took the deal.

This was another amazing read by tijan. anything she writes I'm addicted right too. and this story was no different. at points it had me stressing on how it could have a happy ending and twists that had me shocked. the characters were amazing and Morgan and brody were so relatable even though they were so different. I felt connected to them and was dying the whole ride for happy ending for them. I've never read a book so emotionally investing before and it had me on the edge of my seat. this books is a 5 star for me.

What a wonderful, unique story. Brody & Morgan both come from two entirely different worlds, Brody being a movie star and Morgan who lives in the wild. They each have their own heartbreak and their unexpected connection brings changes to their worlds.

I love the way this story unfolds. It’s not your typical movie star story and I loved its uniqueness. Morgan and Brody take root in your heart. I was in awe of Morgan. She had such an impressionable personality and the way she lived makes you view life from an entirely different perspective. And Brody was so sincere and down to earth and caring. I loved how protective he was of Morgan.

I loved Morgan and Brody’s connection and how they could relate to each other. It was beautiful to watch them both heal through each other and allow themselves to let their guards down. The growth of their friendship and bond is heartwarming and I really enjoyed their story! I also enjoyed the element of mystery and not knowing who could be trusted.

This is a beautiful story of letting go of the past and letting people in. It’s a story of new beginnings, freedom, sacrifice, and love, and you feel it all! It will captivate you from the start.

Such a beautiful love story!!!

This story was really quite beautiful. The way these two broken people came together and healed each other. Brody and Morgan.

Brody had experienced something that pretty much crushed his heart. Instead of getting help, he drank and slept around. He got so bad that his reputation in Hollywood was at stake. He went from Golden Boy to Bad Boy Brody. That is how he ended up at Morgan’s home. It’s was the movie about her mother and Peter Kellerman (her stepfather) that was going to help start changing his reputation. But he was still drinking and still fighting his demons.
Then one day he saw a ghost...

Well, he saw Morgan actually. But the way she showed up and then disappeared, she seemed like a ghost. But actually Morgan was broken too. Ever since the day her mother was murdered. Her heart was crushed, and her way of getting help was through her pack of Wild Horses. But she wasn’t really healing, not truly.

*Side note...I loved Morgan’s relationship with the horses. The way Tijan described the activity of the pack. It was all so perfect. I could easily visualize all of it.

BROVO TIJAN !! ONE OF MY FAVORITE STORIES EVER !!

OMG !! WHAT A BRILLIANT BEAUTIFUL STORYTELLING AT ITS FINEST! LOVE BRODY AND MORGAN !! BRODY' S CHARACTER WAS DEFINITELY A EMOTIONAL MESS IN THE BEGINNING, THANKFULLY HE MET HIS MATCH WITH MORGAN !. LOVED HER BRILLIANT CHARACTER AND HER TOTAL CONTENTION WITH HER TWO WILD MUSTANGS! THESE BEAUTIFUL HORSE'S HELP SAVE HER LIFE AND HELPED HER HEAL...AMAZING AND THRILLING !

WOW ...WOW.. WHAT AN EMOTIONAL JOURNEY ON THIS RIDE ! MY HEART THUNDERED LIKE THE HOOFS OF THE WILD MUSTANGS!!

THE NARRATION WAS PERFECTION!! SABASTIAN AND BROOKE BROUGHT BRODY AND MORGAN TO LIFE !! THIS IS GOING TO BE ONE OF MY ALL TIME FAVORITES NOW ! ONE I WILL ALWAYS GO BACK TO !
BROVO TIJAN ! EVEN THROUGH MY TEARS YOU MADE MY HEART HAPPY WITH THIS STORY. HORSE'S HAVE ALWAYS BEEN A PART OF MY LIFE AND DEEPLY ROOTED IN MY HEART ...I AM SO OVER JOYED WITH THIS STORY YOU HAVE NO IDEA HOW MUCH IT MEANS TO ME , SO I'D LIKE TO HEARTFULLY THANK YOU !! IF I COULD I WOULD GIVE YOU A BILLION STARS !!
P.S. DO YOU THINK THERE MIGHT BE A FOLLOW UP STORY ??? 🤗😍

I really enjoyed reading this author.  I look forward to reading more books by this author in the near future.

Unique and interesting! A fantastic romance with interesting characters and an engaging storyline. Nice listen!

I so enjoyed this book. I bought it years ago and enjoyed it. I did not write a review. I saw this today when I was trying to find a book to enjoy. Yes, there is an audible and the narration is pure perfection so I read the story as I listened to the audible. The story is about an actor, Brody, who suffers from the loss of his brother. He meets Morgan, a woman who whose Mom was murdered when she was very young. Morgan escaped the murderer and lived with a wild herd of horses. She coped by living more with the herd than in her ranch house. Together, they work themselves through finding out how her Mom died and how his brother died. It’s a wonderful, thought provoking, sweet romance. Highly recommend. HEA, no cheating, no cliffhanger. I just wish there was another book with this couple that I could read.

This is such a wonderful book about love and horses. It's so beautiful how Morgan, Shiloh and Shol created such a unique mother/daughter and sister bound. Then you have the amazing love story with Brody. This book is a definite must read/listen to and the narrators made this book even more special.

By the narration of Sebastian York. I admit I love this narrators voice. He does a wonderful job of narrating Brody. I liked that is was set in the open. I’m so glad I bought the audio version of this book. Five Horses (or Stars) on this one. 🐎🐎🐎🐎 🐎

Want more about Brody and Morgan

I loved this book. I would love to know more about Brody and Morgan journey and Morgan's brothers and sister.