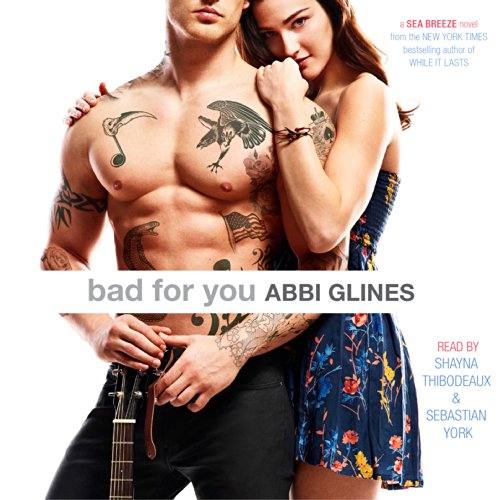 Innocence isn’t meant for the addictive…. The next sultry affair in the New York Times best-selling Sea Breeze collection by Abbi Glines is unstoppably steamy.

Addiction is part of Krit Corbin’s nature - and women have always been his favorite obsession. But that's the life of a lead singer in a band. He can have any woman he wants - anywhere, anytime. Well, except for one.

Blythe Denton is used to being alone. The minister's family who raised her never accepted her as their own, and the cruel minister's wife made sure Blythe understood just how unworthy she was of love. So when she finally gets the chance to live by herself, Blythe takes it and moves into an apartment building with a loud upstairs neighbor who keeps throwing parties all night long.

It's during one such party when Krit opens the door to find his new neighbor standing there. Blythe wants him to turn down the music, but he convinces her to stay. She's nothing like the women who parade in and out of his apartment, but Krit can't resist her - her brown hair, cute glasses, and sexy innocence is too much for him to ignore.

Determined to win Blythe over, Krit Corbin may have just found his biggest addiction yet.

What listeners say about Bad For You

YUM YUM!!!! Would love to move to Seabreeze

What made the experience of listening to Bad For You the most enjoyable?

You get to know all of the charactors in the previous Seabreeze books however, you almost have to root for the bad boy who just wants to be loved.

True romance at it's best...two lost souls who have never had anyone find love in eachother.

Have you listened to any of Shayna Thibodeaux and Sebastian York ’s other performances before? How does this one compare?

I have heard a lot of other books from both Shayna and Sebastian. Love Sebastian's voice..it's the voice of all good wet dreams.

Bad is better than good.

If you have read any of the Sea Breeze series, then you probably will remember Krit Corbin from those books. (FYI: This is a companion novel and be read as a standalone). Krit is the lead singer of the band Jackdown, and has been a secondary character, making appearances in most of the previous novels. He is a total man-whore. Women love him and he loves women - or at least taking them to his bed, then he's done with them. There have only been a few exceptions to this rule and only one that he cared about and lost. So, before Bad For You, we've only seen Krit as the badass rocker who loves them and leaves them, but in this book we get to know Krit inside and out - the good, the bad, and the ugly.....

Blythe Denton is a shy, sweet, and extremely insecure girl whose life has been anything but easy. Neglected and made to feel unwanted and undesirable her whole life, she has a hard time understanding why anyone would want her. Finally she feels free, and is now in Sea Breeze, attending college there. She has her own apartment, which just happens to be in the same complex as Krit Corbin's apartment. When Krit first sees Blythe, he knows there is something special about her, whether he wants to admit it to himself or not. Blythe has no clue who Krit is or what he does, just that he's tattooed, pierced, has black eyeliner around his eyes, and screams bad boy, but she's not intimated or afraid of him in any way. Krit lets Blyte see a side of him that is real, one that only a chosen few know exists. Though there is undeniable chemistry and attraction between them, Krit doesn't do relationships and this innocent girl is definitely not someone he wants to get close to in that way, but yet he can't stay away from her, so he decides to be here friend. Krit helps Blythe come out of her shell and though he thinks he is bad for her, he is really the best thing that has ever happened to her. Blythe's past has left her scarred, but underneath it all, she is a beautiful, loyal, loving, and passionate person. Krit sees all this, but so do other guys, which he can't stand, forcing him to have to choose whether or not he is willing to give love a shot. Just when things seem to be looking up, his past comes up to bite him in the butt and he faces loosing the best thing that has ever happened to him.

I totally loved Krit's story. While reading other reviews, it seems that people either love it or they don't, and I am glad to say that I fall in the "love it" category. While Cage York will always be my favorite Sea Breeze guy, I think that Krit is next on my list of favorites, followed by Preston. While to some, the bad boy and innocent virgin my seem cliche, I think that Abbi Glines did an excellent job and totally rocked the whole concept in Bad For You. I loved Krit and Blythe's story, and I also enjoyed getting to see some of the characters I've come to know and love from the previous novels make appearances in this book. If you are a fan of the Sea Breeze series, then I would definitely check this installment out. I hope that you enjoy it as much as I did.

I was a little skeptical at first because I wasn't that interested in getting to know Krit (Crit?). But I was hooked right away! I like that the Sea Breeze series seems to get steamier and steamier from its last one and this one was WAY steamy.

Good book. I enjoyed listening to this audio. I love Sebastian York too. This book is perfect.

a sweet book 2 broken souls find each other. a bad boy and good girl are able 2 find the food in each other

Each of the Sea Breeze books are Really Great & NOT repetitious in ANY way-each has there Very Own story that keeps me coming back for more-
Story line is adult-but descriptions are perfectly stated for what is going on at that moment for that storyline...
I am a little partial to ROCK stars so I think maybe that is why I liked this story so much-also the narrators were Excellent and made me want to keep listening-superb narrating !!

while the love story is romantic it is a bit unbelievable but where the story lacked the audible performance of both narrators kept my attention wanting more...

What made the experience of listening to Bad For You the most enjoyable?

What was one of the most memorable moments of Bad For You?

When Krit goes after Blythe.She must travel home because her fosterdad had a heart attack.She does not tell Krit but he drives all the miles when he get the news.

Have you listened to any of Shayna Thibodeaux and Sebastian York ’s other performances before? How does this one compare?

I have listening to Sebastian York before and really love his voice!:)

Sebastian York is one of my favorite narrators.He has a very hot voice.I get goose bumps every time I hear him.

was wondering what crit's story was. Glad I finally got to it. worth the wait.

I love everything about the Sea Breeze and Rosemary Beach series!! Great reads/listens! Can't wait for more from Abbi. She's definitely a favorite of mine!
4.5 stars!