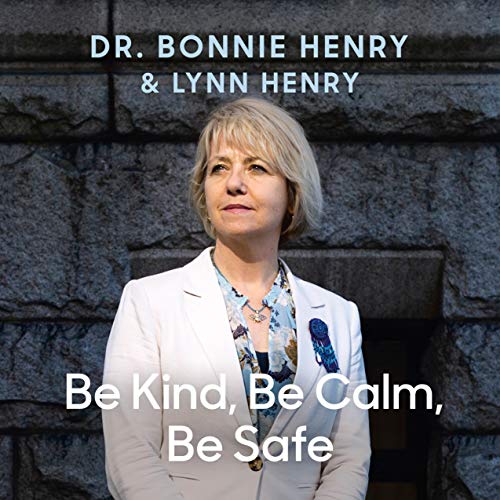 Be Kind, Be Calm, Be Safe

From the BC doctor who has become a household name for leading the response to the pandemic, a personal account of the first weeks of COVID, for readers and listeners of Sam Nutt's Damned Nations and James Maskalyk's Life on the Ground Floor.

Dr. Bonnie Henry has been called "one of the most effective public health figures in the world" by The New York Times. She has been called "a calming voice in a sea of coronavirus madness", and "our hero" in national newspapers. But in the waning days of 2019, when the first rumours of a strange respiratory ailment in Wuhan, China began to trickle into her office in British Columbia, these accolades lay in a barely imaginable future.

Only weeks later, the whole world would look back on the previous year with the kind of nostalgia usually reserved for the distant past. With a staggering suddenness, our livelihoods, our closest relationships, our habits and our homes had all been transformed.

In a moment when half-truths threatened to drown out the truth, when recklessness all too often exposed those around us to very real danger, and when it was difficult to tell paranoia from healthy respect for an invisible threat, Dr. Henry's transparency, humility, and humanity became a beacon for millions of Canadians.

And her trademark enjoinder to be kind, be calm, and be safe became words for us all to live by.

Coincidentally, Dr. Henry's sister, Lynn, arrived in BC for a long-planned visit on March 12, just as the virus revealed itself as a pandemic. For the four ensuing weeks, Lynn had rare insight into the whirlwind of Bonnie's daily life, with its moments of agony and gravity as well as its occasional episodes of levity and grace. Both a global story and a family story, Be Kind, Be Calm, Be Safe combines Lynn's observations and knowledge of Bonnie's personal and professional background with Bonnie's recollections of how and why decisions were made, to tell in a vivid way the dramatic tale of the four weeks that changed all our lives.

Be Kind, Be Calm, Be Safe is about communication, leadership, and public trust; about the balance between politics and policy; and, at heart, about what and who we value, as individuals and a society.

The authors' advance from the publisher has been donated to charities with a focus on alleviating communities hit particularly hard by the pandemic: True North Aid with its Covid-19 response in Northern Indigenous communities, and First Book Canada, with its focus on reading and literacy for underserved, marginalized youth.

“[Be Kind, Be Calm, Be Safe] provides a fuller portrait of the pandemic situation from behind the front lines, simultaneously offering an appreciable glimpse into Dr. Henry’s thoughts and experiences. In order to enjoy it, you certainly don’t have to be a member of a Dr. Bonnie Henry fan club. But, after reading it, you might just want to join one.” (Vancouver Sun)

What listeners say about Be Kind, Be Calm, Be Safe

Be Kind Be Calm Be Safe

I lived these four weeks listening to Dr. Henry daily. This is a glimpse into her world and what shaped her reactions and words that helped all of us in British Columbia endure together.

Not even good enough for bathroom reading

It was very interesting to hear about the experience from the inside. What a great read! I found myself thinking about where we were while hearing it from the other side. From having to evacuate my wife back to Canada, having friends contract COVID and some pass away. I was very happy to read that expressions of thanks were displayed and received to offset the negativity and viciousness that was/is directed towards Dr Henry. Her calm and steady leadership through this mess makes me very thankful for her and her team’s efforts in our behalf. A great book!