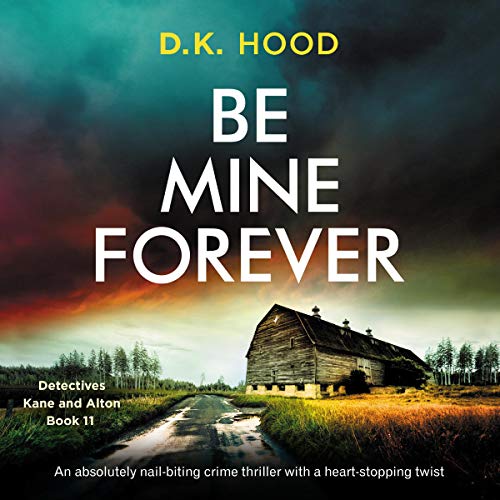 An absolutely nail-biting crime thriller with a heart-stopping twist

Gray clouds gather overhead as she runs along the dark road. Not a soul is out in the storm, or so she thinks. As the vehicle pulls up alongside her, she sees a familiar face behind the wheel and thinks she’s safe. Little does she know, she has just put herself in unthinkable danger....

When local cheerleader Laurie Turner goes missing after practice and her bright red pick-up truck is found abandoned by the side of a quiet road, Detective Jenna Alton fears the worst.

Visiting Laurie’s family house, Jenna senses that the teenager’s home life isn’t as perfect as her father would have people believe. Quick to temper and full of hatred towards Laurie’s mother, Dr. Turner doesn’t seem to know the first thing about his own daughter, let alone how long she’s been missing for.

With the clock ticking, the whole town takes to the streets to find the missing girl and, after a frantic search, a terrible discovery is made at the bottom of an old mine shaft on the outskirts of town. Laurie’s pale body is totally still and Jenna is sure somebody in the local community is her killer.

When another cheerleader goes missing, Jenna thinks that someone close to the school is picking the teenagers off one by one. As she talks to the other students, it becomes clear that there are plenty of people who’d like to silence the girls forever.

Then her own deputy David Kane comes face to face with the murderer, and Jenna has to race to save him. Can she do so before it’s too late? Or will another young life be taken?

Each Kane and Alton book can be heard as part of the series or as a stand-alone.

What listeners say about Be Mine Forever

Worst narrator ever. She ruins these books.

I really like these books but the narrator is terrible. She is awful. It’s painful.

Love the writer, HATE THE READER. CANNOT STAND TO

LISTEN ANY MORE! I PAID FOR 3 TITLES WITH THE SAME READER BEFORE I LISTENED. Now I am stuck and will need to buy it on Amazon and read it for myself. Really awful!

I love this series and have read every book. I can’t wait tor the next book and am really hoping Kane and Alton’s relationship moves forward significantly.

After 37 chapters, I just couldn’t finish. I really tried. I couldn’t relate to the audio. I couldn’t make the connection. I will sample first next time.

Mr DK Hood is a very good writer! And I love his books. They leave you in suspense through
Out the story. They also leave you wanting more. Thank you for treating us to your writing!

once again, the author wrote a decent story, and once again the narrator ruins it. I have listened to all the books in this series and I do look forward to the next installment. I enjoy following the characters and the stories always hold my interest. However, a criticism I have of the author is that some of the dialogue between characters is too "goody-goody" for such a psychological thriller. And a CONSTANT criticism I've had of the narrator is that her dramatic interpretation of the dialogue is ridiculous. The narrator really ruins the story and her over the top performance makes me roll my eyes. She is just way too dramatic.

I love this author and the characters. I just have one issue and it’s probably because the author is so good at writing. Jenna and Cain hint around about marriage and children but yet they live in separate houses on the same property but aren’t really “together.” Just doesn’t make sense. It detracts from it being believable. I do enjoy the stories and will keep reading but just a suggestion. It’s time they actually date or go their separate ways. Lol

Who is murdering the High Schools Cheerleaders?

What a ride! Absolutely fantastic!! In this book, D.K. Hood introduces a brand new Deputy, while bringing back some old FBI friends! We find it what's next after Rowley and Sandy got married! We see a bit of how Emily had grown (in regards to becoming an M.E.) from the other books in the series, however there's much less of her (and her sisters) in this book. While Wolf the M.E. is still around, he's not a major player in this book.
This time the craziness is happening to High School Cheerleaders, during a festival!! This book is fast paced, when you think you know "who-dun-it" something changes your mind to a new suspect. Will the pompoms lead them to the killer? Jenna getting physical to prove herself, and Kane (and the deputies) standing down per her request! Love the setup for future books, Rio, tracking chips, Carter, Jo, Jo's daughter, twins, Emily's future as an M.E., the possibilities are endless.
D.K. Hood, you keep me wanting more!! Can't wait for book #12!!
HIGHLY RECOMMENDED!!

I would like to thank NetGalley, the publisher Bookouture, and of course D.K. Hood, for providing me with a copy of this book in exchange for an honest review (to support one of my favorite authors, I have also purchased the Kindle and Audible editions as well. My review can be found on NetGalley, Kindle Store, Audible, and Goodreads!
All opinions are my own.