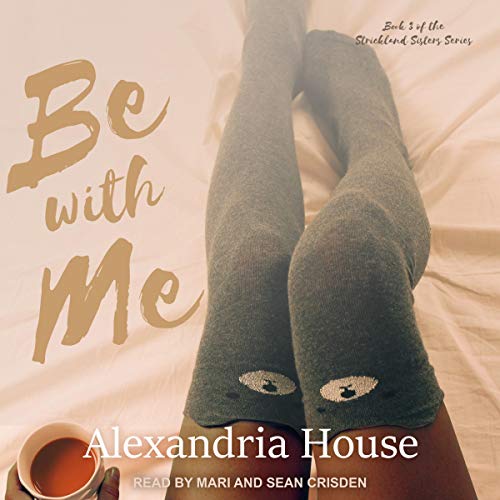 Written by: Alexandria House
Narrated by: Sean Crisden,Mari
Try for $0.00

Former career student Nicole Strickland is smart, spoiled, loud, irreverent, and flagrantly promiscuous. Her greatest desire is to live a life of leisure, and Attorney Travis McClure is just the man to make her dreams come true.

Entrepreneur Damon Davis is Nicole's best friend, has been since they crossed paths in second grade, and has loved her for as long as he's known her. And the truth of the matter is, Nicole cares for him, too. There's not much Damon doesn't know about Nicole and he accepts her, all of her, as is. The only thing keeping these two apart is a past hurt Nicole can't seem to let go of. Oh, and her engagement to Travis.

Damon wants his rightful place in her heart.

Nicole wants to protect her heart from the only man with the power to break it.

In the end, will Nicole give Damon what he's craved his whole life, the chance to be with her?

What listeners say about Be with Me

This book was exciting a very well written.

The narrators were PHENOMENAL

I loved the first two. I NEED ME A ZO. Nicki Strickland was my least favorite. She was loud, ghetto, loose, and jealous. She was going to marry a man because of his status and money while sleeping with her so called best friend and everyone else. Then try make it seem he was the bad guy. I didn't like her or Damon together they were just trfling. To me she never grew up in the end and they only stayed together because of guilt. I would of liked to see her stay with Travis and there relationship grow. Have him go against and stand up to his father and mother since he had a problem with that. His parents were a mess, but he and his sister seemed like sensible people. I like Travis even though he wasn't good in the bedroom I would of taught him a thing or two. Hell , I like watching Matlock too. LOL

Just read the book instead!

These narrators are GOD AWFUL. The voice of the woman is monotone and lifeless, as though she is having trouble reading. When the male voice reads for female characters, it’s like nails on a chalkboard. Very painful listen overall.

Pleas read the story instead.

I loved the first two books in this series but this one just made me cringe. I guess the author gave Nikki book smarts to make up for the fact that she is just plain stupid. She was not likable from the very beginning and made bad decision after bad decision. And the whining...please stop! I should have stopped after book two but I wanted to see it through. What a wasted credit.

I enjoyed the story overall but found myself annoyed with Nikki. She’s smart but dumb . The narrator Mari was okay... I think her voice is too mature sounding for Nikki and quite bland. I enjoyed the male narration. This story isn’t as good as the rest of the series.

Main character is Too Much Drama

This book was really hard to get through with all of the drama the main character held. She was vain and had trust issues even though she was sneaky.

She was too much

One thing I really liked about this story was the humor. I didn't like the voice of the female narrator at all but then again I am not too fond of males reading for a female character. Nikki was crazy and she acted like it. I spent most of the book not approving of her hoe status as she portrayed in the first book and I thought about how she was lying and cheating on a man she knew she didn't want. If the roles were reversed I would want to burn a man into dust if he did what she did. In the end however the author worked all that out although I still didn't like what she was did. This book almost seemed too long like come on already and wrap it up. She got on my nerves really. I would like to read a story by this author where there is not someone smoking weed. I am still investigating it. I did like the story and in some ways it was better than the last two.

She is honestly one of my favorite authors. Phenomenal down to earth book with characters that are totally relatable.

OMG!!! This series has so much potential. The first two books were awesome, this book was too much. The main character Nicole is a sex addict. Every chapter and seen is about sex. First, the intro of the story is ridiculous. The writer could have written a better storyline on how they were childhood friends and grew to love each other. The storyline about the teen sex is ridiculous. I was disappointed that the last book was not as good as the other two. I hope the author will add more books to the series that will make this series a better read. On the other hand, the narrators are the best. I love their voices. They speak with clarity and bring the stories to life.

This was a GREAT follow up on the two previous books which I loved as well. I loved knowing how the other couples faired. All books were very well narrated and funny as well as sensuous. Start with the first one so that it’s not ruined for you.

I loved this series!

Nicki was of course the same hot mess from the first 2 books. But she grew on me. Damon had my heart since meeting him in the last book. This one really pulls the series together and wraps up the crazy Strickland family.