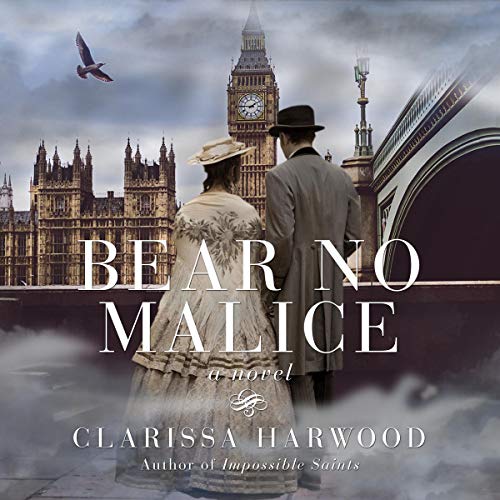 Bear No Malice: A Novel

Great Expectations meets Grantchester in this story of love and lies, secrets and second chances, set in Edwardian England.

Beaten and left for dead in the English countryside, clergyman and reformer Tom Cross is rescued and nursed back to health by Miranda and Simon Thorne, reclusive siblings who seem to have as many secrets as he does. Tom has spent years helping the downtrodden in London while lying to everyone he meets, but now he's forced to slow down and confront his unexamined life.

Miranda, a skilled artist, is haunted by her painful past and unable to imagine a future. Tom is a welcome distraction from her troubles, but she's determined to relegate him to her fantasy world, sensing that any real relationship with him would be more trouble than it's worth. Besides, she has sworn to remain devoted to someone she's left behind.

When Tom returns to London, his life begins to unravel as he faces the consequences of both his affair with a married woman and his abusive childhood. When his secrets catch up with him and his reputation is destroyed, he realizes that Miranda is the only person he trusts with the truth. What he doesn't realize is that even if she believes him and returns his feelings, he can't free her from the shackles of her past.

What listeners say about Bear No Malice: A Novel

The story was full of twists and turns and wasn’t too predictable. Loved how the author included snippets of classic books at the beginning of each chapter, how the two main characters also made mention of some classic stories and how their lives were similar/different to them. The performance was soothing to listen to, I felt like a family member was reading it to me. The performance was less than I am used to in that the actor didn’t have very distinctive voices for each of the characters so sometimes I wasn’t sure who was speaking (and I had to rewind and listen again). But I would still recommend this book because the writing is great and I loved the actor’s voice.

The story in Bear No Malice is not particularly interesting and plods along rather aimlessly. If plot is not going to be the central focus of a novel, then at least the characters need to be engaging. Unfortunately, they are not.

The central figures are somewhat one dimensional and flat. Although there is a great deal of dialogue between characters, and repetitive internal reflection, there is little in the way of character development. It is as if Miranda and Tom are cardboard cutouts being moved from location to location, making small talk and waiting for life’s decisions to be made for them.

Much of the story revolves around Tom, an arrogant and narcissistic clergyman who is victim to a brutal beating and false accusation. Forced to eat humble pie, his character is altered by circumstance, not personal choice,

Understanding what motivates characters is what makes them interesting; here, the reader is given little insight into what makes Tom and Miranda tick. Instead, they react to a series of conveniently crafted events; how and why they change seems forced and artificial. Although the author is trying to create complex characters who have lived flawed, interesting lives, they seem strangely passive, as if they are observers rather than participants.