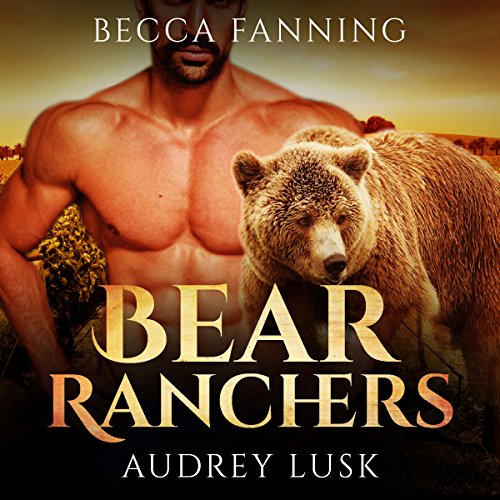 The complete Bear Ranchers series here just for you! Includes the following stories and more:

Riding Bearback: Get back here you stupid cow! Jess Lincoln just wasn't cut out for this! She's a city girl from New York, used to cafe lattes in the morning and swanky bar Manhattans at night. But here she was, running from her past and her ex-husband. So why did she run to a cattle ranch of all things? Did she think she could just throw on some pumps and walk out to milk the cows? Was there anyone out here that could help her?

Wyatt Wade knew his way around a ranch. His Bear Shifter clan specialized in long distance travel of troubling species. Water buffalo, oxen, and even flocks of ostrich: if it walked on this earth, they could herd it. But this fiery little city slicker that just moved into the ranch down the way was something else. She was all thorns and tangle weeds, but his primal instinct didn't care. She needed help, and he needed her.

Saddled Bearback: Jamie Campbell loves the family ranch, but a recent family tragedy has hung a dark cloud over the place. The cattle still graze, but her father has been a knot of worry and his whiskey is never far away. Her cousin Oliver has a knack for business, but when it comes to managing the herd of cattle, Jamie is in over her head. Not that she'd ever admit to needing help, of course. No matter how tall or handsome that help turned out to be.

Jesse Crowe thought this would just be another normal gig. Help a local ranch get back on their feet and make a little spare change on the side. It looked like a win/win situation. Of course, as soon as he laid eyes on the rancher's daughter, his primal bear Shifter needs erupted. Oh yeah, this just turned into a win/win/win situation.

What listeners say about Bear Ranchers

I got this book from the author. This box set is a complete story. It would be maddening if it were just each story by itself. I enjoyed the entire story but the narrator was a bit grating. she has not mastered the art of changing her voice nor does she have the deep male timbre corrected. Each story is intertwined within the other and to my way of thinking could not be stand alones. They must be read as a set. This bear-wolf war is interesting and is presented in such a way that shows who the good guys are. Overall the story was good but not as good as some of the other stories by this author.

Loosely interconnected tales of romance complicated by the man being a bear shifter. I liked the stories, but was glad that they were together in one book. I also like the author's imagination.
I usually love Audrey Lusk as narrator, but she seemed a little off her game this time.
I requested and received a free review copy from the publisher, author, or narrator courtesy of AudioBookBOOM.

I’d recommend the book but I recommend listening to the sample first, and getting the eBook if you don’t like the narration style.

What aspect of Audrey Lusk’s performance would you have changed?

The voices were OK, but the female characters often sounded very whiny and this made them come across as weak and incapable, which does not match their overall portrayal in the books/stories. The pacing and phrasing also needed work especially during the intimate scenes as these same across as a bit stilted and the emphasis seemed to be placed on the wrong words/sections.

I’m a big fan of Becca Fanning, I’ve listened to and read several of her books and I always like them, this one is no exception. The four stories in the book link together really well and the plots for the later books worked well with what happened in earlier books.

Note: This book was provided free by the author/narrator/publisher in exchange for an unbiased review.

>Riding Bearback:
This story has action, romance and shifters. Jess Lincoln leaves New York to start a new life in Colorado on a cattle ranch.

>Saddled Bearback:
Jamie worked on a ranch with her dad. Her dad needed help on the ranch so he hired Jesse.

>Dancing Bearback:
Willow, Rosemary and their aunt Vanessa live together on a ranch where they also perform old west musicals. One day they take a short trip and run into a ditch. This is how they meet Tyler.

>Spurred Bearback:
Valerie Rousseau, working for a New York conglomerate, is sent out to scout the area and make reports. Kyle Pierce, has decided to buy them out.

>Bucking Bearback:
Sun Valley is still under threat from a giant corporation secretly led by a werewolf. Jeanie is sent by her firm to decide if there are any reasons why the land cannot be developed and come across a few strange bears.

Overall, this was an entertaining box set.

Audrey Lusk did well with the narration.

If you could sum up Bear Ranchers in three words, what would they be?

I liked how the bears courted their woman, getting to know them before springing being bear shifters on them. I also liked that the people in Sun Valley all seemed close and supported the bears and their mates.

Have you listened to any of Audrey Lusk’s other performances before? How does this one compare?

No, these are the first books I have listened to that she narrated. I think she did a great job putting personalities to the characters.

Yes, I laughed many times during several of the books!