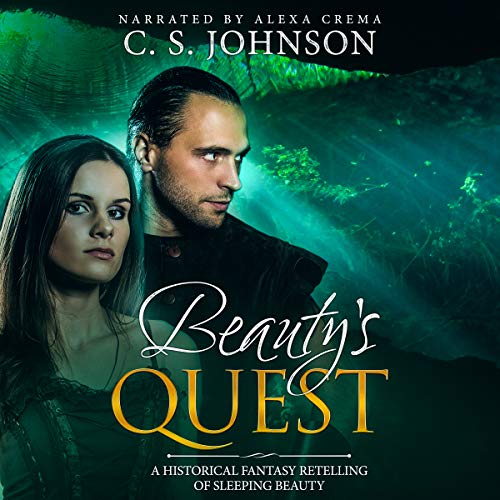 In order to defeat the sorceress Magdalina and free herself from her curse, Rose, the Princess of Rhone, has set out to find dragon’s blood. As she travels toward the Romani territory, where the Serpent’s Garden resides, she is accompanied by her faithful group of friends, including their newest member, Prince Philip of Einish. But when the group ends up shipwrecked on the small island of Maltia, they find themselves trapped without supplies and a way off the island. With time, money, and new enemies working against them, Rose remains determined despite her despair to rise to each challenge. But can she face the growing fear - and longing - inside herself?

Sweet, suspenseful, and full of surprises, Beauty’s Quest is the second book in the Once upon a Princess series from C. S. Johnson.

What listeners say about Beauty's Quest

A talented narrator brings this rich and robust continuing adventure to you anywhere. An engrossing book that keeps you wanting to read at least another few pages....and hours later, you're still reading with pleasure. Five Stars

Great Story and Narration. I Truly enjoy it!

I listen and relisten to this series. It's one of my favorites. Comforting and exciting. C.S. and Alexa work well as a team!

I love the story

I am not big on the performance. She just seems nasally. That aside, Rose's insufferable attitude and constant pushing of Theo away makes her not my favorite character, but she does have good qualities and she has a lot to learn. Theo is amazing and Mary is always the kind and patient motherly figure. All in all a great story of patience, courage, and attitude adjustment lol.

I ABSOLUTELY LOVED IT. A GREAT ADVENTURE WITH SUSPENSE AND INTRIGUED WITH HINTS OF A FORBIDDEN LOVE.
VERY WELL WRITTEN GOOD FOR ALL AGES.
NARRATOR WAS GREAT AND EASY TO FOLLOW.

LEAVES YOU WANTING TO LISTEN TO THE NEXT TWO. YOU HAVE TO FINISH THE STORY

A QUEST FOR ROSE, SLEEPING BEAUTY

A WONDERFUL NARRATION! THE BOOK JUST WHISKS YOU AWAY INTO THE REALM OF SLEEPING BEAUTY, BUT WITH A MORE REALISTIC TWIST, ROSE IS CURSED TO PRICK HER FINGER AND FALL INTO A DYING SLEEP FOREVER. SO ROSE IS FIGHTING ON HER EIGHTEENTH BIRTHDAY. HER BEST FRIEND IS THEO WHO HAS KNOWN HER SINCE THEY WERE CHILDREN AND IS HER COMRADE AT ARMS IN BATTLE. THE QUEST CONTINUES ALONG WITH THE BUDDING RELATIONSHIP OF HER ROYAL HIGHNESS AURORA ROSE AND THEO.
AND THE NARRATOR DID A. FANTASTIC JOB!!!!!

My second read/listen from author C.S. Johnson was another interesting spin and expansion/re-telling of a traditional fairy tale, the thought of reading a “fairy tale” doesn’t particularly appeal to me but since I was gifted books #2 & #3 in Audible editions I wanted to read book #1 first and I’m glad I did. Extremely well written, the characters, even the minor ones, are well developed. I’m a character reader, I get into the characters. Who and what they are. Why they do the things they do. The things that make the reader get invested into the characters and thereby the story. Since I own both the Kindle & Audible editions of this book I was able to follow along while being read to. I’ll be reading more from this author! I was given the Audible copy of this book & am voluntarily reviewing it.