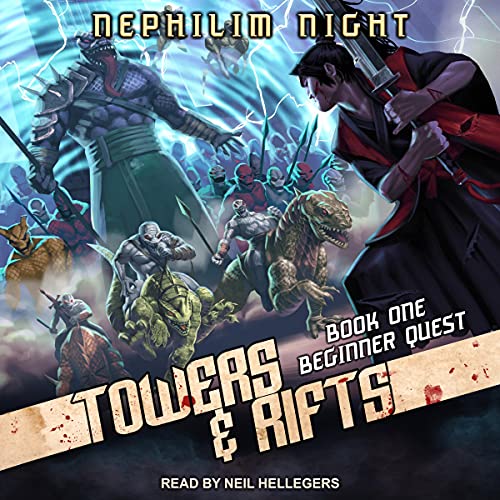 Written by: Nephilim Night
Narrated by: Neil Hellegers
Try for $0.00

Given a second chance at life, now he must play for his life.

Betrayed by those closest to him, Viktor's soul couldn't move on for decades. Pitied by one of the Gods, he was given the chance to participate in the next round of bets between the gods. It was an eternally violent game known as Towers and Rifts.

The world he found himself in was nothing like the one he'd spent centuries cultivating and becoming stronger. He was right back at the bottom along with everyone else but for the knowledge he retained.

The day the tower spawned, everyone was given access to a strange and game-like system he only knew about from memories of the body he inherited. The first order of the day: to heal from the horrible wounds that came along with the new body and to tackle the "Beginner's Quest" everyone was given.

Viktor was at the top before he died the first time so he knew what it was like to be powerful, in control, and a warrior without an equal. Nothing would stop him from getting to the top using this second chance he'd been given.

What listeners say about Beginner Quest

I had issues with this story and I feel I had to leave a review hope it helps someone. The MC is unlikable he is supposed to be avenging his murdered wife and child and then hooks up with the first woman he meets and falls madly In love with her in less than a day. He has strong cringes when it comes to his relationship with this 'love interest' he's quite possessive of her in less than a day and discards his love for his dead wife because he met her and tells himself she would want him to be happy. To me this book is like if a neckbeard wrote himself a story with him as the main character/ hero.

So check it. (Spoilers).
.
The MC wakes up in some in-between realm with no memory of anything he's given a choice by God to goto another world with all the power he had before he died BUT... after being warned that if he wanted to know how he died he would lose everything. And you know what he chose?? Too lose everything...Stupid right? So this guy finds out him, his wife and his unborn child was murdered by his brother for power and the MC gets angry then goes on some rant about getting revenge ((but with what power? The power you just sacrificed for no reason at all???)) he tells the God he's going to use his anger to motivate himself to get strong again (cringe) and kill his brother. So you should know that the MC has been dead for 100 years now and he died at age 300 so this guy is basically saying he's going to hold a 400 year old grudge for motivation his brother is obviously stronger than him if it's been 100 years and he's going to have to make up for lost time, not to mention that he's starting back at lvl 1 because he has the brain capacity of a infant.

So anyway the God tells him about the world he's going to and tells him to pick a body the MC chooses a body of a guy who's family died in a accident because he doesn't want any "baggage" and to take care of people but literally in the same chapter starts to teenage crush on some random chick he's just met and puts a plan together to start a gang. There's so much wrong with this story the pacing is terrible, no one is concerned about anything, everyone is just chill no matter what happens, this is listed as a revenge story but all it is is some old dude trying to get his dick wet and acting like some angtsy teen.

Decent litrpg with a lot of romantic parts...

Wish the description was a little more honest, the intro sets up a great story...but I wasnt expecting the romance/harem motif for half the book... i had to skip a lot of the cringe worthy parts to make it more palatable...

i liked it. a mix between your classic cultivation and western culture. id like to see more mechanics explained and stuff. but overall worth your credit and time

Solid story and better than most LitRPGs

Definitely not perfect, but I'd still recommend it. Looking forward to the next book!

Great narrator, I believe that's why I kept listening.

I think it's about a third of this book involving really cringe outer and inner dialog about the MC checking out/flirting with a support character.

It's nothing x rated or close to the horrid harem type story lines most of this genre has... but it's a huuuuge part of this book.

I'd have really enjoyed this story without the cringe attempt at a lite romance novella.

Still giving 3 stars for story, because I am listening to all of it, and if you can stomach the strange romance attempt, you'll probably enjoy.

Pretty Bad, could have been great

The story and progression had a lot of potential. However needed a ton of editing and serious changes to timeline and reactions to make it any good. the individual scenes are pretty good, but taken together they make no sense and it's a complete jumble that continually makes you cringe.

I actually dropped this, there's barely any cultivation/progression but supposedly the MC is the only cultivator but it is never explained how the others advance on power and somehow they get stronger than the mc also if you going with the reincarnation give the MC something to making stand out a little but nope he only gets his memories before he dies and they are supposed to fuel his rise to power again but NOPE again he meets a girl and boom all his rage is gone