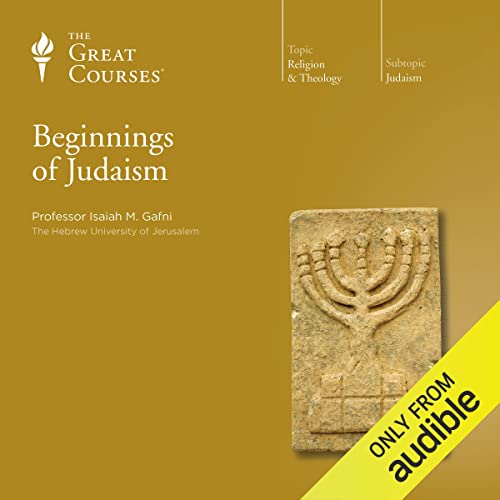 For thousands of years, Jews have looked to the Hebrew Bible, also known as the Old Testament by Christians, for their origins, and have located in them the tenets of their faith. However, much of what is recognized today as Judaism does not appear in the Bible. How did Judaism develop from its biblical roots to the highly developed system we know today? What has changed - and what has remained constant? In this series of 24 spirited and provocative lectures, Professor Gafni investigates how the Jewish faith struggled to continually redefine itself during the first thousand years after the completion of the last books of the Hebrew Bible, tenaciously clinging to existence through circumstances that might well have torn it asunder.

The two landmark events that altered Jewish history forever were the two destructions of the Jewish Temple in Jerusalem. This sacred place was first destroyed by the Babylonians in 586 B.C.E., and, after having been rebuilt 70 years later, was razed once again by the Romans in 70 C.E., after the Jews waged a fierce uprising against Roman rule in the province of Judea.

The events surrounding these destructions lie at the heart of understanding Judaism. As you explore the evolution of an ancient faith into a system of beliefs, practices, and laws recognizable today as Judaism, you'll discover a tradition of vigorous and joyous debate - where reinterpretation coexists with profound acceptance of the original instructions from God regarding the practice of faith.

What listeners say about Beginnings of Judaism

I found the content of this course to be a great historical approach to the study of how Judaism came to be the religion it is today, from (ancient) geopolitical, social, mythological, and humanist perspectives. Prof. Gafni presents the subject in a dynamic and engaging way, with sprinkles of humour and fair analysis of the zeitgeist that shaped Judaism as both a religion and a nationalistic entity.

Very interesting lecture and the narrator is well informed and great at conveying his knowledge.
Only issue I had was with the intensity of the narrator and I had to lower the volume every time because it well like he was screaming and getting very intense.

What I Never Learned in Hebrew School

Every post Bar Mitzvah age young Jewish adult should listen to this
When I was a child going to Hebrew school 50+ years ago, we went over all of this in a hurry I never really understood how Judaism developed from a Temple with sacrifices, to a modern worldwide book based religion. I never understood how the Jews came to leave Israel and went out into the world and carried down their belief in one G-d. This really helped me to understand my background. I feel more a part of the Jewish community now that I've heard this. I am an assimilated American Jew. I only know my great grandparents arrived in the USA as part of the great Jewish migration in the 1880 s to escape the Progrums. I cannot trace my history back beyond that. I do not know exactly where my great grandparents came from other than somewhere in Eastern Europe. I do not have any idea how their ancestors got to Eastern Europe other than to presume they came from the Iberian Peninsula after the Inquisition or understood how the Jews left Israel and came to settle in all of the Mediterranean countries. I never knew how a belief in one all knowing G-d was carried down for 2500 years. I wish I had heard this when I was in college.

It greatly enhanced my understanding of my Jewish background and gave me some insist into how Christianity developed.

Have you listened to any of Professor Isaiah M. Gafni’s other performances before? How does this one compare?

I misunderstood the subject from the title

For those wanting a book about the foundation of Yahweh worship and the early history of Israel and Judah, this is NOT the book for you. This is very much a book on Second Temple Judaism.

Gafni's constant use of "CE" and "BCE" is so distracting that I had to return the book.

When will these academics stop torturing us
with their political correctness.

No one is offended by BC and AD, so please get over yourself.

Four Stars Is a Reccomendation From Me

Would you listen to Beginnings of Judaism again? Why?

I have re-played a number of chapters already. Lots of very good info, competently presented.

What does Professor Isaiah M. Gafni bring to the story that you wouldn’t experience if you just read the book?

One of the better religious presentations.

As someone who is reasonably well versed in Talmud and Judaism, I was very impressed with Dr. Gafni's knowledge of the subject. One gets the impression that he grew up in a religious Jewish home and turned clinical academic later on. He is clearly very familiar with the Hebrew, Aramaic and Greek texts in their original languages. He also has a good grasp of Christian texts and history. As he attempts to assemble a cohesive history from these sources as well as the Qumran texts and fragments, he seems to give equal weight to all but less so to the Talmud and the writings of the Rabbis. This seems to stem from his academic stance and his being steeped in the world of Biblical criticism.
All in all, he does manage to show how Judaism evolved and makes an effort to stay clinical and focus on the facts. The only concern I would have is that his thesis is based on some underlying assumptions.

Would you listen to Beginnings of Judaism again? Why?

Yes I will likely listen to it again. If you're at all interested in how people groups interact and how events from thousands of years ago affect life and culture today, you'll enjoy this listen.

Well put together, thorough and riveting. A fascinating lecture series.

Wonderful presentation ! Easy to follow! Very interesting! The information contained helped to understand the early years of Judaism which through so many trails and challenges still survives today.

Judaism explained to the novice

I enjoyed these lectures very much. Isaiah Gafni brings these lectures to life. He has so much enthusiasm for his subject. I have listened to both of his lectures and I which he had one that delved in to the Old Testament. I would like the Jewish perspective to the Torah and the practices in the temple and deeper discussion of Abraham.
Being an LDS Christian I found the lecter about Harold fascinating and I understand the politics of the time when Jesus was born. I also understand the dispersion of the Jews much more ands that they where still a very cohesive group.

This lecture is well worth your time.

I found this very interesting about Rabbinic period A good change from Biblical period.

Every Christion should listen to this lecture. It offers a chance to better understand the Jewish religion. I now have small understanding and it helps me grasp onto my Christion beliefs.