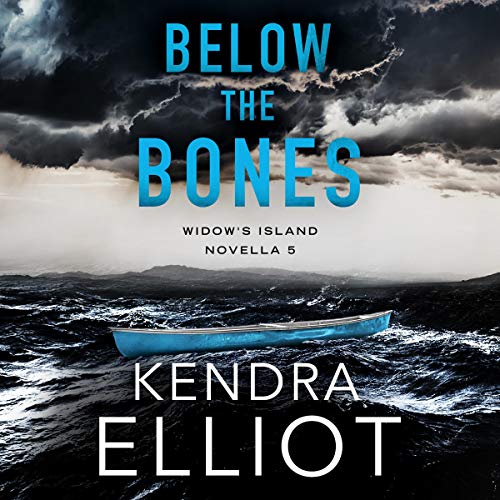 Written by: Kendra Elliot
Narrated by: Christine Williams
Try for $0.00

A former FBI special agent must come out of retirement to solve a murder in the fifth novella in the Widow’s Island series from Wall Street Journal bestselling author Kendra Elliot.

Former FBI special agent Cate Wilde is a new bakery and bookstore owner - and retirement is now complete with a doctor boyfriend. Although she struggles with PTSD, the sweet life she’s living is a far cry from the gruesome work she left behind six months ago.

But when skeletal remains turn up on Widow’s Island - and the MO of the killer is too familiar to Cate - the dream comes to an abrupt end. What if the case she solved eight years ago isn’t as closed as she thought? Her hometown needs her, and despite her mental health and her boyfriend’s protests, she has no choice but to return to her dangerous past life.

Soon Cate is in a desperate race to stop a cold-blooded murderer from killing again, once and for all…only this time, she’ll have so much more to lose.

What listeners say about Below the Bones

I really enjoyed this case. It had twists and turns as they tried to find the connection with the serial killer behind bars and what the connection is between the victims and Widow’s Island. The story definitely pulled me in from beginning to end and I can’t wait to see what is coming next.

Audiobook: Narrator - Christine Williams
I’ve reviewed the previous audiobooks in this series with this narrator and I’m not a fan. However, I have forced myself to continue and while I still do not care for her performance, I am adjusting to it enough to be able to somewhat ignore those things that annoy me.

Wow! This one had a lot going on. With a past case pushing Cate back into “action” to some degree and her struggle to determine what she wanted in her life as far as her job goes, this just barely hit on the drama that unfolded within these pages.

I really liked that Henry was so supportive to her. The romance takes a far back seat, but his quiet presence added a touch so sweet I ached. This also has a mystery that extended itself through years and I never saw the end result until it was revealed. I love when that happens.

Although these tend to feel the same, and I should probably allow some time to hibernate in between books, I am enjoying each one of them.

I'm really enjoying this series! The friendships and the mystery and the little bit of romance gives this book everything!

Discoveries of bones on the island connect to an old FBI case. This causes Kate to reconsider her recent decisions and explore how the cases are connected to her.

What's next for Kate and Tessa?

Enjoyable listen, good story, excellent narration. Good characters. Stayed awake all night to finish. I will listen to more of this authors books.

This great series of novellas just keeps packing a punch. Each book is at least as good as the one before. You certainly can't ask for more than that.

Life on Widow's Island is beginning to find a new "normal" again. Especially for Cate, who has retired from her FBI job and chosen to stay on the island as a bookstore/coffee shop owner. But this island never seems to sleep for long. A skeletonized body found in the island's park has everyone's world tilted a bit, but especially Cate's. Because she's seen this M.O. before. In a New York minute, Cate's new quiet (and pretty boring) life is changed again. She's got things to do and decisions to make.

If you're new to this series, all of these stories can be read as stand-alones. But since they retain many of the same characters and some points of the plot are interwoven from book to book, I recommend starting with book one for best enjoyment.

These are great short stories by Kendra Elliot & Melinda Leigh! Love them so much. The narrator though, isn’t one of my favorites. They’ve always had great narrators in the past.

The fifth in the series finds Cate Wilde happily running her bakery and bookstore on Widow's Island when a bone is dug up by a local dog. Turning out to be an entire skeleton, having been buried for about five years, Cate's interest in peaked when there are many similarities to an old case she worked with the FBI. However, with the perp in jail at the time, it can't be the same killer. When Cate is asked to assist the FBI in solving the case, she agrees. But is she in for more than she bargained for? This is a great short murder mystery. I enjoy Cate'r relationship with Dr. Henry Powers who runs the medical clinic on Widow's Island and also serves as the coroner. I like that there is little bad language or involved sexual scenes in the books. The murder mystery wasn't solved until near the end, and I hadn't figured it out.

Below The Bone Widow's Island Book 5

Within the pack a citizen who was walking with his dog found a human bone and he went to see what his dog has uncovered. As Jerry Hooper sew that the bone was human he call the Deputies who came to uncover the bone as they work with their own towns' FBI special agent Cate Wilde together with the only town doctors'. It was discovered that there are other bones and it led to agent Cate been called backed into the case. They had to see the killer that was responsible for the arts. Now in the Island this new bodies has raised more investigator. It led to uncover that new criminal is in the city and among the Island. In the end they discover who was responsible.

I really enjoy these quick novellas that Kendra Elliot and Melinda Leigh write (separately). This is more on Widow's Island with the enjoyable characters, entertaining suspense, and a bit of romance. The narration is very good.